And we've been getting the business, that's for sure.

It snowed most of yesterday afternoon and overnight. When the sun was finally abroad in the sky, I took a look at the first task of the day -- well, the first after my morning coffee, anyway. It was beautiful, and it was going to hurt. 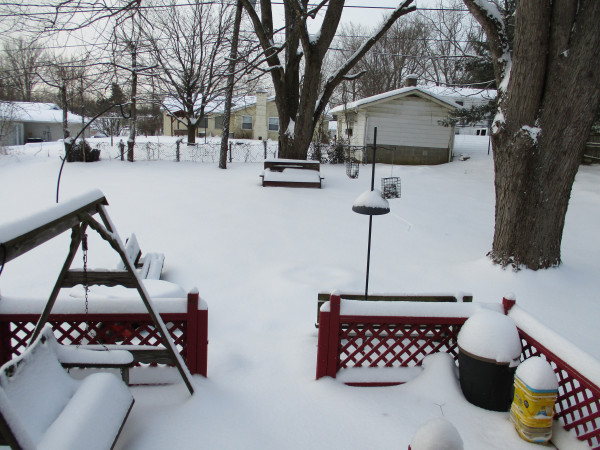 Looking out my back door
Doot, doot, do 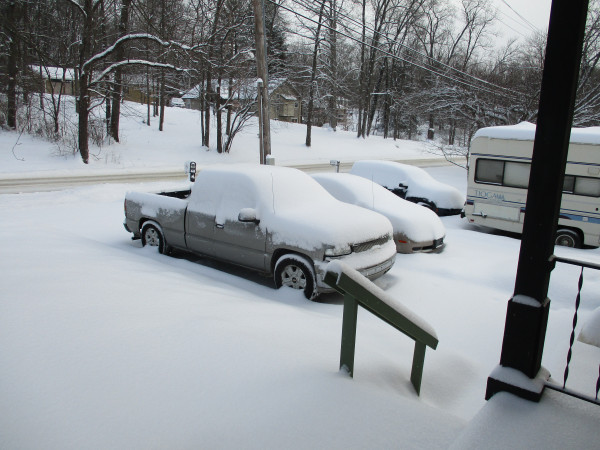 Snowbound
The beasts of burden are buried and blocked

The back yard could take care of itself, I decided. There was bird food enough in the feeders and no other reason to be traipsing around back there. I addressed myself to the walks and drives, therefore. Halfway through, I had to change hat and jacket for lighter ones because I was heating up too much inside my snowsuit. I persevered, however, and eventually got everything cleared. I also started up both vehicles so they'll be ready to go when summoned. 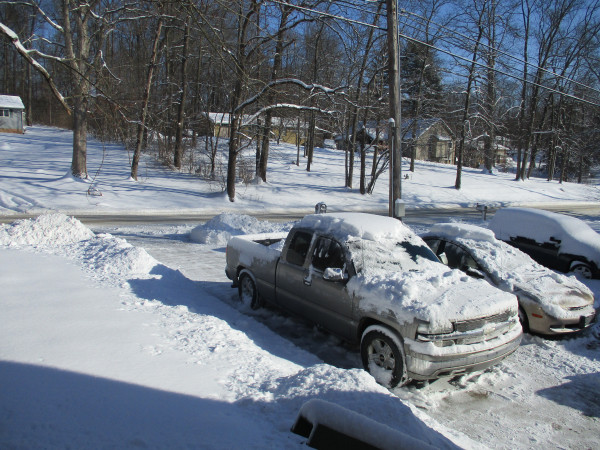 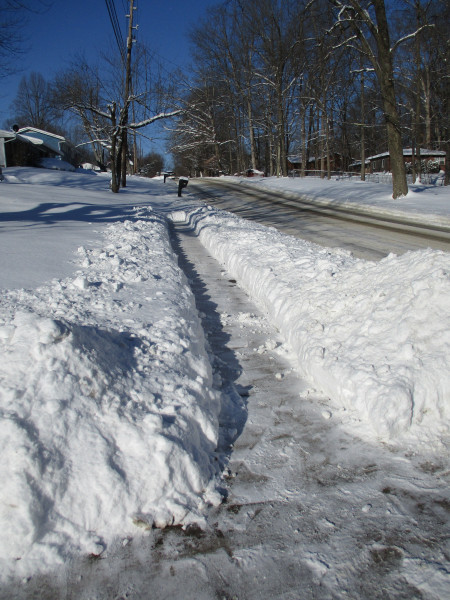 Where the sidewalk ends
Where the shoveling ends, anyway

I'm about the only guy in the neighborhood still trying to keep his sidewalk clear. I don't say this to be arrogant, but as a point of civic pride. I want to be a good citizen, and so will keep this up as long as I can. It's something I was raised to do. That thought helps make shoveling snow a little more tolerable. (Look at me, I'm actually a responsible adult -- who'd'a thunk it?) Two other thoughts comfort me in this otherwise aggravating task: gratitude to God that I am still strong and healthy enough to get out there and do it; and concern for Deanne as I clear her car and her half of the driveway exit. (She has to go get her driver's license renewed this evening and needs to make a quick getaway come 5:00.)

Mark Twain said, “Travel is fatal to prejudice, bigotry, and narrow-mindedness, and many of our people need it sorely on these accounts. Broad, wholesome, charitable views of men and things cannot be acquired by vegetating in one little corner of the earth all one's lifetime.” I agree. It’s important to meet people who know things differently, who speak a different language, who have different customs. Sadly, there are people who travel the world and only stay in their little Western bubble wherever they go. They only stay at hotels offering Western-style service and amenities. They eat Western food – or Westernized versions of the local food. They tour places that have been adjusted to receive them – and their tourist dollars. The British built a global empire, but made a little Britain everywhere they went; Americans wander the world, and never see anything but tourist kitsch. They see only themselves reflected in all that they encounter.

Meanwhile, there are people in this country who interact with foreigners – tourists, students, whoever – in much the same pattern. They think they’re being broadminded to ask foreign students what pronouns they prefer. In many cases, I’m sure the foreign students would never dream of asking people back home to use their personally chosen pronouns, even if that were possible in their language. But they are young and eager to figure out America (that’s why they’re coming here to study), so when they’re asked such a bizarre question, they respond in the way Western elites expect them to. After all, they want to experience the natives (us) fully, understand the world as we see it, etc.

L.P. Hartley said, “The past is a foreign country; they do things differently there.” Travel into the past by means of books or other study can be as enlightening as travel across the world. And once again, it’s important to see things as the natives of the past saw them, to make the effort to learn something of their language, their art, their customs. Doing so will enlarge your own understanding of life. But there are people, some of them with fancy degrees, who read all the histories through the lens of whatever totem they use to analyze everything. They survey space and time and see only themselves. There are cranks on the Right, cranks on the Left, religious cranks, economic cranks, nationalist cranks, racial cranks, sexual cranks, revolutionary cranks . . . the list is endless. The one thing they all have in common is their lack of humility. They can only teach, and so they can never learn.

In setting out to encounter the world, I must begin with myself. That self comes from a place, a time, a culture. It speaks a language. And with every encounter in my ever-widening experience, I meet people who are Not Me; Not Us (however defined). When I make a connection with them, a mutual understanding or experience, that’s a wonderful thing. We have become a We. But trying to discover who they really are (insofar as I can discover it), I also learn more about my self and the people I come from. I constantly find new things to admire in others – but I also sometimes find things I can’t admire, no matter how I try. As a result of my encounters, I also constantly question what I have always “known” – and sometimes wind up affirming it still. It’s okay to admire. It’s okay to critique. It’s okay to change your mind. And it’s okay to confirm your previous opinion. Only you must not put people – living or dead – on the bed of Procrustes and simply justify your prejudices. You didn’t need to leave home to do that.

“Wherever you go, there you are” is a book by some guy named Jon Kabat-Zinn. But it’s more than a book title. It is the existential reality of the uneducable.
Collapse