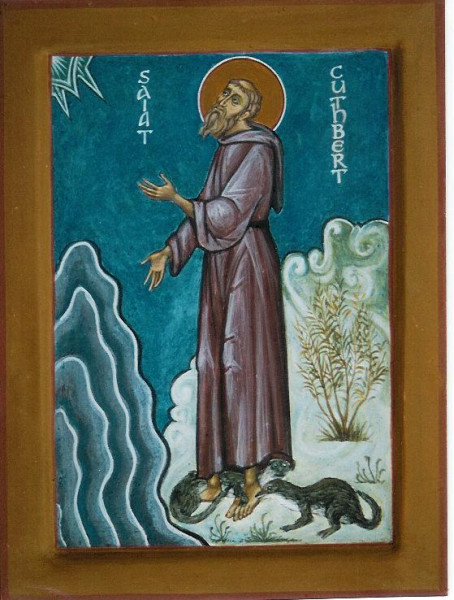 Today is the feast day of St. Cuthbert (c.634-687), successively monk, bishop, and hermit. Cuthbert grew up in what is today Scotland. Back then, it was part of Northumbria, but it was being evangelized by Scottish (Irish) missionaries. Cuthbert was trained in the Celtic monastic regime at Melrose, where he was eventually made prior. He then moved to Lindisfarne and was prior there. He unwillingingly accepted the bishopric of Hexham, on the condition that he could move his episcopal seat to Lindisfarne. He would tour the villages with a portable altar made of gold to offer the mass. After a few years of bishing, he resigned in order to end his days as a hermit on the Farne Islands.

After his death, his body did not decompose; he is one of the "incorrupt" saints. His face could be recognized for decades -- centuries -- after his death. This despite the fact that the monks of Lindisfarne took his coffin with them after the Vikings attacked the monastery, keeping it for many years at Chester-le-Street before finally interring him in Durham Cathedral. Despite being exposed to many different conditions, Cuthbert's body remained in reasonably good condition. Durham used to open his tomb every March 20, in order for the people to be able to view his relic (i.e., himself). The Reformation stopped that.

The grave goods buried with Cuthbert have been removed to museums in the UK. Prominent among his effects were the portable altar he used, his pectoral cross (which has been copied in many different pieces of jewelry), and a beautifully bound little book of the Gospel of John in Latin -- the oldest complete book found in England.

In the icon, above, he is shown with otters, which are probably his usual symbol. Sometimes, he is shown with the head of St. (King) Oswald of Northumbria. There are stories behind both of these symbols, though I forget them at the moment. The seagoing ducks of northern Britain are called "Cuddy Ducks," meaning St. Cuthbert's ducks; he forbade hunting them on the Farne Islands when he kept his hermitage there. This is probably the oldest environmental law protecting a wild species anywhere. The Farne Islands are still today a national bird sanctuary. If it were up to me, I'd picture him with a duck.

Cuthbert was the prior of Lindisfarne, a prominent churchman of Northumbria at the time of the Synod of Whitby (664). Though trained in Celtic monasticism, he quickly adopted Roman ways along with his abbot, Eata, and his leadership helped ease the tension between the two parties. Cuthbert was not prickly and self-important like his contemporary St. Wilfrid. He lived an austere life. He governed his monks well, and he was tireless in ministry to the ordinary people of Northumbria. He was a very great man.

Years ago, when I first visited Durham cathedral, I went to the apse to see his tomb. It was surrounded with a cushioned kneeling step and rail. I knelt to pray at his tomb. My tears surprised me; I'm not normally weepy. And I asked that I might be as faithful in my ministry and as good a pastor as Cuthbert had been.
Collapse