My 10th Winter Rendezvous as head chef began with an attack of Bell’s palsy in mid-week. Then I discovered on my way to camp Friday that the heater in my truck isn’t working. And when I tried to take my first pic of the weekend, I discovered that I had left my SD card in my computer. I wasn’t the only one facing challenges. Anna and Brian were late getting to camp, and when they arrived I learned that the reason why was that James was sick. They messaged Deanne from the road, who came to camp after work to take him to our house, where he has spent the last two days watching videos and talking non-stop. He’s much better now. I am some (minimally) better; Bell’s palsy takes a while to get over. The nap I took with Hera on my lap and the shower I just finished make me feel even better.

So, I have no pics of my own to share. When Anna sends me some of hers, maybe I can post some. In the meantime, this one by Bob Kessler will have to do. It’s a closeup of one of the three boar’s heads I cooked on Friday. The cracker barrel (evening snack) on Friday had a Roman theme. We had libum, an ancient Roman holiday bread, a relish tray of “Mediterranean munchables” (various sorts of olives, pickled veg, green onions, sardines), and Vindicta Lupimagnimali, which is Latin for “The Big Bad Wolf’s Revenge.” 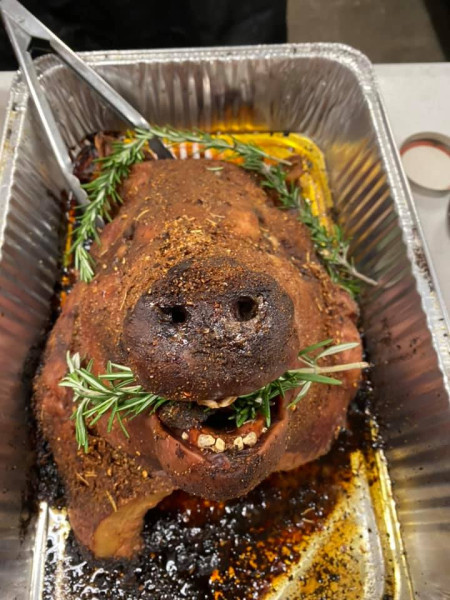 The Scouts really got into hacking the flesh off those boar’s heads! Even our new female Scouts were intrigued. Maia from Troop 119 wanted an ear to gnaw; her friend said she also wanted an ear. Most got cheek meat, but we had boys and men who sampled tongue, brains, and even an eyeball. The cracker barrel got everybody launched on a fun weekend.

We had a full crew of helpers for a rare wonder, and they all worked steadily throughout Friday evening and Saturday. I was pretty frantic for a while on Friday; I was there before 10:00 and all alone until Kara arrived about 1:00. By that time, I’d already put the boar’s heads down and made the filling for ten venison-bacon pies. She and I blazed away until Anna & Brian arrived about 5:00. The rest of our help started streaming in with their troops about 6 or 7 p.m. Once they were on duty, our prep pace really picked up. We had an hour and a half between end of prep and cracker barrel, and were consistently an hour or more ahead all day Saturday, except for the kebabs: we had guys finishing up the kebabs for the second seating while the first seating was chowing down.

The Feast this year featured:

Massive quantities were on hand, of course, and I encouraged everyone to eat up. Then we fed them the leftovers at Saturday night cracker barrel. “Food is love,” they say, and they’re right. One of the prime ways I show love to people is to feed them. I’m happy to say that the feeling is reciprocated. I have never had so many people thank me (us). Even the appreciation often shown to me as a pastor (and it was not a stingy amount) pales beside the outpouring of affection I experience when I lead the kitchen team on this deal. Middle School boys go out of their way to thank me and shake my hand. Lots of grownups also thank me, even hug me occasionally. Old friends and Scout-acquaintenances express their delight in food and fellowship. Our team is made up of a tight-knit group of old hands and helpful newbies, and we all enjoy what we’re doing; to work on such a team is like playing a sport at a high level of competition with a really good team.

It’s certainly as tiring as playing a sport. I was up astonishingly early three days straight. I stood on concrete and cooked for two days (with occasional breaks in a camp chair). As the head ding, I found myself schlepping large, heavy amounts of meat, veg, and whole cases of this and that out to the prep areas in order to fill empty hands with something to do. The pace was brisk. And then this morning, we had to clean everything up, sort the leftovers, and get out of Dodge. I left about 10:00 a.m.

It’s good to be home.


N.B. The title of this post is a pun. "Tuckered" is American slang for "tired," but "tucker" is also Australian slang for food. I'm tuckered out in both senses.
Collapse