John Wesley came to America in 1736. He left in 1737. His tenure was not a success. He was already an ordained minister in the Church of England, but he had no personal faith. Upon his return to England, he said he had gone to America to convert the Indians, but who would convert him?

This is the true meaning of that annoying canard, "Wherever you go, there you are." We take our selves with us wherever we go, and with us comes all our baggage, all our dysfunction. If we are going through hell, it's usually because we brought our personal hell with us. Many of us worked long and hard to construct our particular hell, and we're not giving it up just because you say we should. So there.

The application of this to the situation in The United Methodist Church should be obvious. Once the phase of separation (however contrived) is over, and there are multiple denominations where once there was only one, each of those successor orgs will be what the people in them already are.

I think that for the centerprogs, that means not liberation, but accelerated decline, punctuated by ever gaudier celebrations of wokeness. But the church will at last be as they think it should be; what matter that there are far fewer of them? So goes the thinking in all the mainline denoms that have bought into the progressive agenda. But that's what they want, so leave them to it.

I'm more concerned about those who leave to form a new, traditionalist denom. For let's not think that's going to be a bed of roses. We trads have contributed to the dysfunction of The UMC in various ways; furthermore, we are not all of the same mind on many questions of policy and style, of worship language, of practice. A lot of difficult work is going to have to go into making a denom that isn't simply a collection of all our quirks. If we succeed at that, though, I think we will grow and prosper.

The goal is to grow and prosper, even in difficult times: to preach the gospel, disciple the nations, witness for Christ, stand by the widow and the orphan. We will no longer have the opposition from the centerprogs, we will not be weighed down by our structure. Ah, but we will still have our selves. And we have within us all we need to wreck the best of starts, unless we have a new beginning in our hearts.

Wesley came back from Georgia lost, at loose ends, discouraged. But in 1738, he had his heart "strangely warmed" at a meeting in Aldersgate Street. The self he now took with him across Great Britain was no longer the stumbling block it had been. Now, he could get something done. The result was the beginning of Methodism, which has now spread around the globe and has 80 million adherents.

Creating a new denomination isn't hard. Making it work is hard. And if we are the same old people we've always been, still fighting the same old battles (even though our opponents will now be in a different denom), it won't work. But if we allow God to make us new, then all that we set our hands to will demonstrate the power and glory of God. And we will do just fine.

I've been kind of dreading this summer's Philmont trek. I've been feeling kind of old and out of it, I guess. But we had our first full crew meeting to launch this afternoon, and I am stoked. What a grand set of Scouts (with room to grow)! What nice and supportive parents!

The big item for this meeting was to settle on itinerary choices. I had laid out all the treks that fit their preliminary interests. After a good half hour or more of each one of them reading the itineraries, I said, "Okay. We need your top six. There is no process, there are no leaders. Figure it out." I watched them talk and negotiate with each other. I wanted to see how they communicated. Oh, they're good. This is going to be so fun!

Their top choice involves burros and Baldy (oh, the memories). The six itineraries are split evenly between the Baldy country and South country. Mileage varies between 51 and 61 miles. Very doable. Lots of exciting program choices.

We set up two more events: an overnight crew organization campout in April and a shakedown weekend in May. And with that, we are up and running. 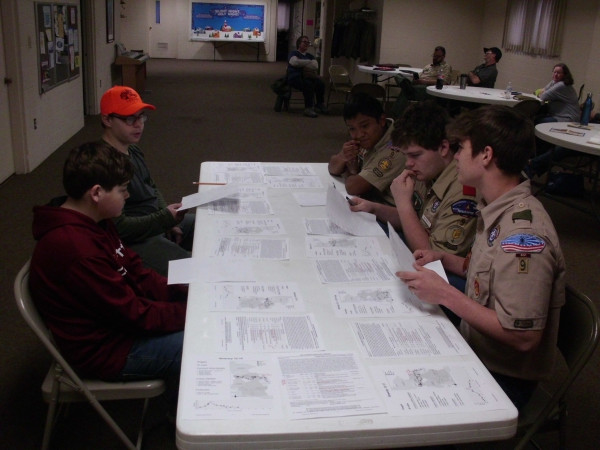