In early Anglo-Saxon military organization, the warriors owing fealty to a lord (drihten) were of three sorts: the gedriht, or companions, who were the personal bodyguard of the lord and pledged to die with him in battle; the duguth, or mature warriors, the veterans who held land tenure under the lord; and the geoguth, or young men in their late teens/early twenties, not yet established in the community and just learning the art of war. Then as now, the geoguth were the majority of the army, and they were on fire to establish their reputation and be numbered among the duguth. They were bold -- rash, even -- in all kinds of adventures.

Old English had a tendency to palatalize 'g' and 'h' -- especially in the middle of words -- to form growly sounds. 'G' could be sounded as a gutteral 'y'. In Middle English, when our spelling became mostly fixed, it was frequently written as 'gh', but that didn't stop the pronunciation from changing. By Early Modern English, 'gh' was pronounced (or not pronounced) in all kinds of ways, which is the reason we find funny Dr. Seuss's book title, The Tough Coughs As He Ploughs The Dough. At the same time, initial 'g' was often palatalized and tended to sound like 'y'.

This means we still have Modern English words based on duguth and geoguth, though you might not recognize them at first. Duguth survives in the related adjective "doughty," which describes a mature warrior's character: brave and hardy. Meanwhile, geoguth is the source of our English word "youth."

No, not that award!

I took my application for the International Scouter Award into the Council office today and had the Exec sign off on it. It's a difficult award to earn, especially for someone who's never done a World Jamboree; however, I had plenty of other international Scouting experiences to fill up my checklist. My attendance at the i-RepCon last week was the last item I needed to get 'er done.

I think I may be the first Scouter in my Council to have ever earned this award. I hope I won't be the last. We had a number of Scouters who served on the WSJ staff this last summer, and it opened their eyes to the possibilities of international Scouting. I may finally have some help promoting this program area.

Last year, I filed for the International Spirit Award, which is much easier to earn. There are requirements for Cubs, Scouts, Venturers, and adult Scouters, who are all eligible to earn this. Previously, three of my Venturers from our happy Crew That Was earned the International Spirit Award (T.C., T.J., and Jeffrey). I also hope we four aren't the last of that breed in Hoosier Trails. 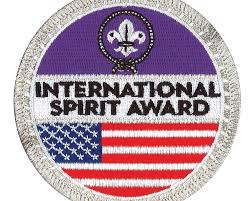 We got the spirit!
Collapse