Last night, Zach called us at 10:00 p.m. from the hospital. He had gone in with a kidney stone. They were releasing him, and he needed someone to pick him up. Deanne was in her jammies already, so I went and fetched him and brought him back here. He is still waiting to pass this rock. Prayers would be appreciated.

I went over to Wilderstead this morning. I met with a contractor about some utilities work, and that looks encouraging. But my main project was to start constructing the beams that the house will ultimately rest upon. I decided I would be happy if I got just the first one built. After all, this is something new; I've never built laminated beams before.

While it's a basic process, there is a lot of cutting of boards so they overlap, and my generator decided to be cranky. I wound up cutting boards with a chain saw instead of a circular saw. Spreading glue turned out to take more time than I thought. And my brand-new nail gun had dead batteries, so I wound up making this first beam with my old trusty framing hammer. 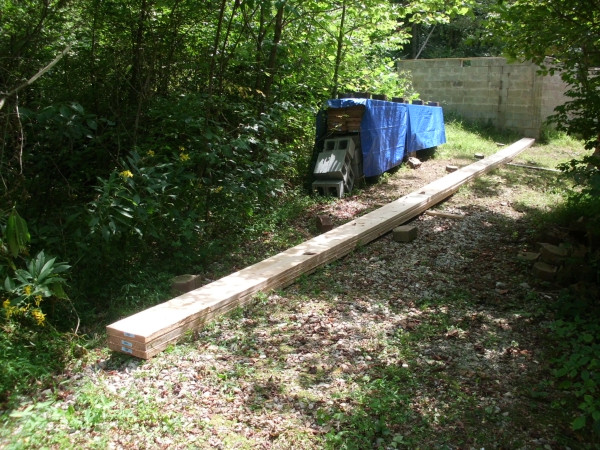 This first beam is 5 3/8" thick and 48' long. It weighs about 650 lb. It contains nine 16' 2x12s, four sheets of 1/4" plywood, almost two gallons of wood glue, and several fistfuls of nails. It took me about four hours to create it. I'll be going over yonder again in a couple of days to try to get it maneuvered into position. It's too heavy to pick up (not to mention long and awkward). I will have block and tackle, rope, my little log dolly, and maybe my tractor available to me. Then I'll have to rig some kind of hoist to raise it to the top of the undercroft wall.

I got home a little after 4:00 p.m. and found Zach asleep on the couch. Deanne has gone in to her office to get some work done. She said she took him over to his apartment to fetch his laundry so he could do it here. I hope they picked up his prescriptions, too.
Collapse