I seem to have stirred up a pot of, er, stuff, with my Facebook post featuring Karen Oliveto as Mad Madam Mim: 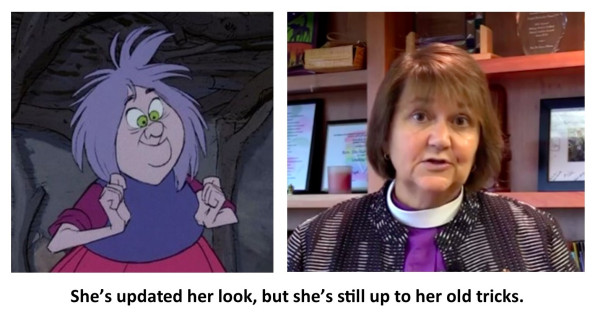 To be honest, I hesitated to create and post this meme (Mim?). I feared to give offense to some of my progressive friends, whom I value; this, despite some of the fierce and ugly things some of them say about people on my side of things. (I was not prepared for how many of my conservative colleagues would be offended. That surprised me.) Anyway, I finally went through with it: First, because I actually think it's funny, and pretty dead-on (When I saw the news photo of Dr. Oliveto, I was immediately struck by the resemblance to Madam Mim. I also once made an election-year meme of Newt Gingrich and Dan Quayle as Pinky and the Brain -- because, well, look at them, for heaven's sake!); Second, because mockery is a key element of resistance.

Those who must suffer underneath tyrants and oppressors, who have no other way to voice their opposition, resort to satire. And satire is effective, against kings and prelates, to be sure, but even against the Devil himself. C.S. Lewis prefaced The Screwtape Letters with two quotes, one from Martin Luther, and the other from Thomas Browne:

"The best way to drive out the devil, if he will not yield to texts of Scripture, is to jeer and flout him, for he cannot bear scorn." (Luther)

As a member and clergyperson of The United Methodist Church, who is stuck with Karen #nosuchbishop Oliveto because she is protected by those who surround her, to make fun of her is to punch UP, not punch DOWN.

So, I am not mocking Oliveto as a woman, or even as a lesbian, but as a prelate foisted upon the whole connection by a radical bunch of delegates to the Western Jurisdiction. She was illegitimately elected, illegitimately consecrated, and illegitimately installed in her office. The other bishops -- not just the WJ, but the whole Council of Bishops -- refuse to remove her or contest her participation as a bishop. Her election was the precipitating event that crystallized all the disbodience in the church into active schism (much as the election of slave-owning bishop Andrew in 1844 did). And her teaching is -- well, "heresy" is a bloodless and clinical word for the kind of lunacy she proclaims. She is, all things considered, a heresiarch. How do we deal with that? Well, until the ecclesiastical machine can grind to a solution, the only weapon we have is mockery.

Which leads me on to consider other villainesses I could have compared her to. Our orthodox Anglican friends were wont to call Katherine Jefferts-Shori, the disastrous Presiding Bishop of The Episcopal Church, "Jadis," the name of the White Witch who rules Narnia and has Aslan put to death. Other Disney villainesses I could have referenced include the Evil Queen/Wicked Witch of Snow White and the Seven Dwarfs, and the evil fairy Maleficent of Sleeping Beauty. Both the Wicked Witch and Maleficent are incomparably more serious as villains than Madam Mim. They are not mildly and rather madly murderous, but murderous with a serious intelligence and will. I saw Sleeping Beauty in its first run as a five-year-old, and it scared the bejeezus out of me. But then, Disney used to not shy away from serious consequences for his evil-doers. The Wicked Witch is hit by a lightning bolt and knocked off a mountain to fall to her death, and we call it justice. Maleficent turns herself into a dragon and is slain by the prince, who wields a cross-shaped sword. For that matter, Jadis is killed by Aslan himself in the final battle of The Lion, the Witch, and the Wardrobe.

Madam Mim, on the other hand, appears as the villainess of The Sword in the Stone, fighting Merlin in a wizards' duel. Merlin turns himself into a virus or bacterium (I forget which) and infects Mim, and so wins the duel. But Mim is not killed for her evil. She is left to recover from her sickness in bed, drinking chicken soup. She provides a bit of danger for the Wart (Arthur), just to move the plot along, but in the end, she is not the kind of grand figure that Maleficent or the Wicked Witch or Jadis is. She's basically just a troublemaker. Which is what Karen Oliveto is. And besides, she looks like Madam Mim, right down to her jowls, hair, and purple blouse.

Not to your taste? Okay. But let's be clear on this. If you really think that Karen Oliveto ought not be a bishop, you are seriously calling for her to lose her job -- and maybe her clergy credentials. That's a heckuva lot more "unkind" than comparing her to the ditzy troublemaker Mad Madam Mim from a cartoon. So have the courage of your convictions. And lighten up.
Collapse