I took Her Majesty to the vet today for her annual checkup. She did fine. After I took her home, I threw some things in a duffel and headed for Wilderstead to do some chores.

The first thing I tackled was replacing a plank bridge that was rotting through. A new springlet has opened up and turned the area next to the stream wet, so it would take three planks instead of one. And like a fool, I bought 2x12s to do it, thinking that was what I had out there (it was a 2x10). Heavy -- and expensive. But I got 'er done. Pounding spikes into fresh-cut ash logs will wear you out, by the way. Planking
You're doing it right

I also attended to some erosion problems with various bits of wood. I dug out and backfilled more dirt from the undercroft. Very tiring.

Finally, I had cleaned out my water tank and brought out 25 gallons of water for my cabin now that the hard freezes are over with. I had to cut a new spar for my tripod, then lashed it together and attached my block and tackle. With that, I was ready to pull the water tank out of my truck bed and hoist it into place. 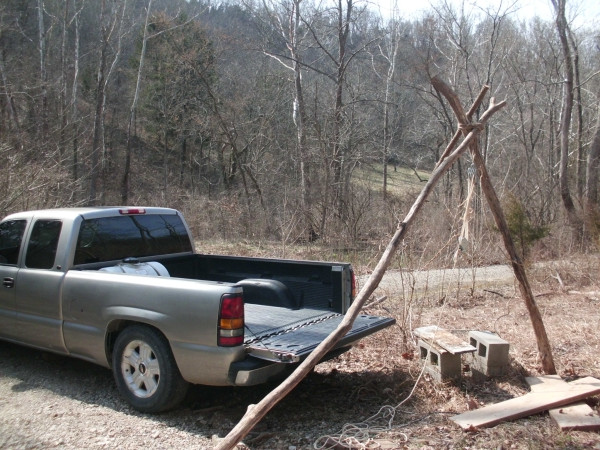 Everything in place
It looks so simple to do

Just as I began to swing the tank out of the truck bed, however, the old rope truss that I tied in place several seasons ago broke, and the whole thing hit the ground and rolled downhill a bit. It lay there like a big, ol' plastic pig, all 200+ lb. of it.

So, I scrounged up some old heavy cloth rope and rocked the tank back and forth so as to get the rope underneath it, and made a new truss for it. Then I attached the block and tackle and bit by bit pulled the tank uphill, repositioning the tackle twice. Finally, I hoisted it into place. I was exhausted when I finally got the job done.

As I was disassembling the tripod, I reflected on all the Scouts who gripe about having to learn knots and lashings they think they'll never use. I use my Scoutcraft skills all the time, at home and in the holler. Shoot, I used them around the church as a pastor constantly. 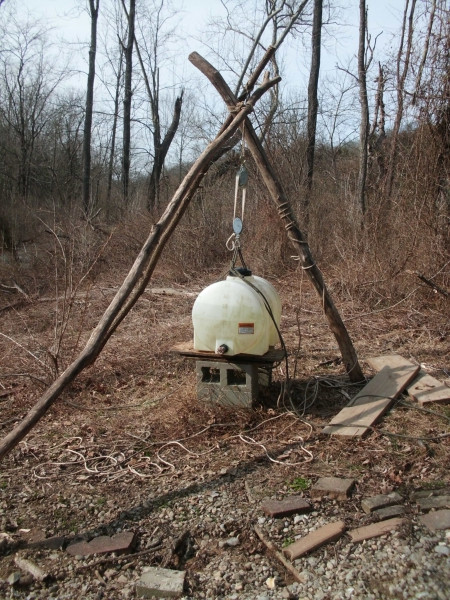 Tanks for the memories
It looks so innocent sitting there

Normally, I go over to Wilderstead early and leave in mid-afternoon. It was nearly 6:30 when I finally pulled out of the gate and headed for home again. Still waiting on my excavator neighbor to come fix my road, fix my creek, and install my back wall perimeter drain. He said the second half of March; God speed the work. Meanwhile, I'm hoping I can get a friend out to ready my electric hookup so REMC can place a pole for me this spring.

April will find me finishing the concrete block piers. Then comes the sill plate. Round about the 1st of May, I hope to start banging nails. With a nail gun; the days when I could contemplate building a whole house with just my trusty framing hammer are long gone, I'm afraid.
Collapse