In the aftermath of General Conference, all kinds of things are being said about the traditionalist coalition that voted down the One Church Plan favored by the bishops and progressives and secured the passage of the Traditional Plan. On the part of said bishops and progressives, much of what is being said is spiteful; some of it is condescending. Little attempt is made to understand who is on the opposite side or why they take the stands they do.

Meanwhile, on the part of those who are heartened by the passage of the Traditional Plan, there is also some confusion. The various members of the coalition sometimes assume that everybody in said coalition is “people like us.” But that’s not really true, either. The traditionalists are a broad-based coalition who are particularly united on the presenting issues of doctrine and morality. They do not necessarily think alike on all things, nor do they always understand where their various partners are coming from.

This series of blog posts is an attempt to explain the traditionalist coalition to both its opponents and its supporters. The opponents need to finally see who we are instead of assigning us an identity that fits their preferred narrative – see us as us, not just as the foil to you. And the supporters need to understand who their partners are, if this coalition is to continue to lead the church – to become a governing majority.

As I understand it (and all these thoughts are mine alone), the traditionalist coalition is made up of three overlapping constituencies: the Evangelicals, the Conservatives, and the Orthodox (see Venn diagram, below). Each has its own point of view, though on doctrine and morality all tend to agree. We will begin with the Evangelicals. 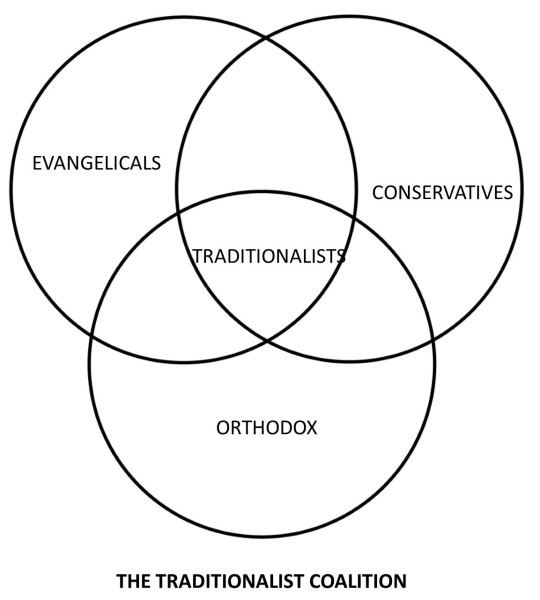 The traditionalist coalition that prevailed at General Conference this last weekend is a broad-based group made up of three main groups: Evangelicals; Conservatives; Orthodox. This series of blog posts is an attempt to explain who these people are both to each other and to their progressive opponents. 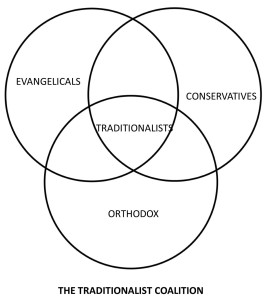 Last of a series

The traditionalist coalition that formed a majority at General Conference last week, and against which so much fury is now being vented by bishops and other progressive/centrist church leaders, is made up of three overlapping groups: the Evangelicals, the Conservatives, and the Orthodox. In this part of my series on “Understanding the Traditionalist Coalition,” we take up the last of the three groups, the Orthodox.