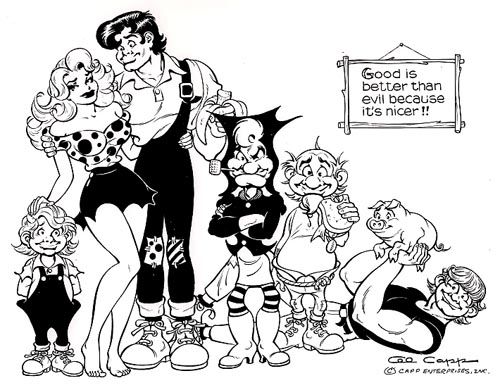 
One of Mammy Yokum’s pretentions to profundity went like this: Good is better than evil because it’s nicer. This fits the cartoon environment very well. Al Capp, Chester Gould, and other cartoonists often drew evil characters in unflattering ways. They grimaced. They were ugly or perhaps beautiful-but-snooty. They had various deformities. Their speech was harsh. Meanwhile, the good characters might have spoken in dialect and resorted to violence as needed, but they were generally cleaner, better-mannered, kind to children and animals, etc. The point is, you could tell which side to root for by paying attention to visual and verbal cues. Presenting genuine moral dilemmas in the comics simply wasn’t done until Stan Lee came along (although Lee’s good characters would soliloquize and agonize their way through moral dilemmas, so you’d know they were being thoughtful – which also told you whom you should root for).( Collapse )
Collapse