I picked up the one-man auger over at Art's Rental in L'burg just before 8:00 a.m. "One-man" is obviously a term of art, unless that one man is Paul Bunyan. I feel like I've been kicked by Babe the Blue Ox. But I got the holes dug for my piers. I returned the beast to the rental place, grabbed some grub, and headed on back to the holler. 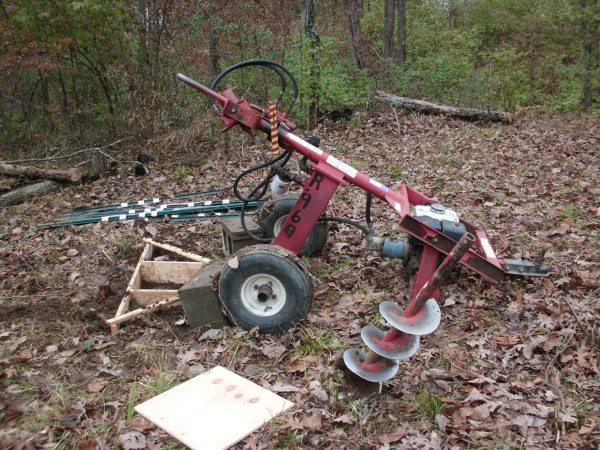 Meanwhile, I debated whether or not to go ahead with mixing and pouring concrete. But then, why else was I there? So, once back at Wilderstead, I installed rebar in the pier holes and got ready to mix a batch. I only got one pier filled, however. That one pier took twice as much concrete mix and three times as much water as I had thought -- and every bucketful of water had to be schlepped up from the creek.

By 2:30, I was toast. I went back to the cabin to rest up a bit. I prayed something on the order of, "Lord, thank you for the strength to do this work today, and for what I think is the wisdom to know when to quit."

Growing older is weird. On the one hand, I still have the strength to do things that make guys twenty years younger look at me in amazement -- but I can't do eight hours in a day any more, only about six hours. And then I have to rest about three days before putting in another day of hard work. Something else that's strange: you'd think that someone who's been doing this for most of the last year would be gaining in strength and stamina from doing so much heavy labor. But I'm not. I'm not declining in strength and stamina, but the idea of continuous conditioning doesn't seem to be gaining me anything.

The weather looks to be good on Thanksgiving Day; meanwhile, our family feast will be in Richmond on the Friday, so it looks like Turkey Day in the holler playing with concrete for me.


N.B. The title of this post is not misspelled. It's just a really atrocious pun.
Collapse