There's a reason God gives children to young couples. When you are approaching geezerdom, there is just no way to keep up with their energy demands. Daniel, especially. He loves to play games, but he can only sit still and focus for so long, and then his body starts jumping around and his attention is grabbed by other things. When that point comes, we know that he needs to go move some big muscles. In such cases, Deanne's exercise machine is a boon. Perpetual Motion
Daniel, not the machine

Zach came over and we played a powerful load of games last night. This morning, Daniel and Deanne pulled weeds and roots (and one nasty grape vine). Then all of us played more games. After lunch, Daniel went outside to play with his scooter. Deanne needed some quiet work time. So I took the werecub and went off, seeking adventure. We wound up at the Tulip Trestle, one of the longest railroad bridges in the US. Built in 1905-6, it is 2,295' long and 157' off the ground at its highest point. 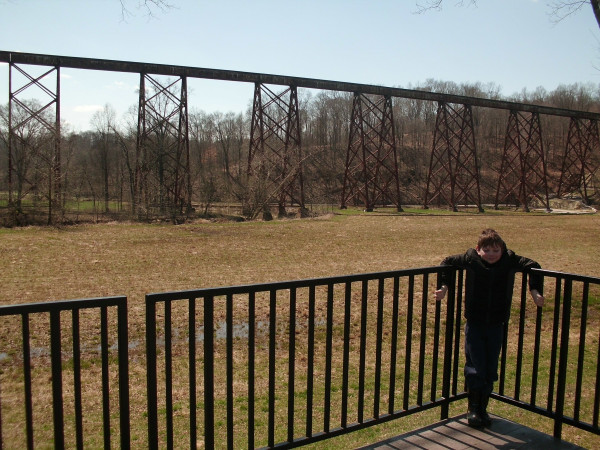 On the way home from the Viaduct (another name for a trestle), we stopped by the Cottingham farm. Alane showed us Harrison's 27 pet rabbits. Daniel petted a few, but they were skittish. One of the farm cats made up to him, though. Steve told us that he has been slowly cleaning out his father's man-cave (his father died last year). A hunter and fisherman, his man-cave was chockablock with mounted turkey tails, deer capes, and other such stuff. He asked if I wanted a pheasant feather. Sure, I said, thinking this would be one (1) feather. He gave Daniel an entire pheasant tail.

And so the adventures continue. I'm thinking Grandbear could use a nap before the evening fun begins.
Collapse