We're taking a break after lunch. Daniel is down for his first solo weekend visit. He'll be re-charged in about half an hour; meanwhile, Grandbear's going to take a while longer.

I went over to Richmond and picked him up yesterday. As soon as we got home, he headed for the basement where all the books, toys, and musical instruments of destruction are. One of the things he most wanted to play with was this old game. It's a version of tangrams, of making pictures with a limited set of shapes. He asked me what the initials on some of the cards meant. The ones that say AWC refer to me, while the ones that say AMC refer to his mother. These are the challenges she and I met while playing with this toy many years ago. The Shape of Things

We watched some cartoons last night and he popped off to bed. I figured he'd be up when Deanne got up this morning, but he slept in for a while. Right after Deanne left at 7:00, he finally got up. I fed him some cereal. He got himself dressed. He said he was full of energy. Uh-oh, I thought. I know what that means. "The motto of the mongoose tribe is Run! and find out," as Rikki-Tikki-Tavi says. So as soon as I was showered and dressed, we headed out to do the morning.

We went by the bank first, because I had to deposit a hefty check in the Pathfinder account (Thank you, Franklin Grace UMC for supporting our Congo Jamboree!). Then we went to the IU Campus. I wanted to show him the Lily Library. We saw their Gutenberg Bible, and the hand-painted first edition of Audubon's Birds of North America. We saw tiny books, early children's books, an actual early printing press. I don't suppose he got a lot out of it, but as he learns more about Gutenberg and Audubon and these others, there will be a peg to hang things on. That's important. On the way back to the library parking lot, we stopped for a picture. 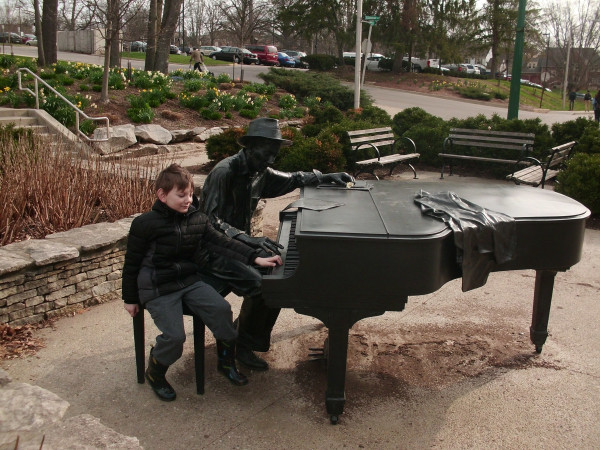 A walk in the woods was on the morning agenda, so we headed over to Wapehani Mountain Bike Park. This was, once upon a time, Camp Wapehani BSA, where I spent seven summers of my childhood and youth. It's a nice place, but of course, I see it with an overlay of what it was when I was young. Seeing Daniel heading down the same road into camp I walked so many times was particularly heart-warming. We walked around Lake Weimer. We saw a cardinal, a bald eagle, ducks and geese. We investigated footprints of dog, raccoon or 'possum, deer. We climbed over a log. He was getting pretty pooped by the time we got back to the parking lot (which was my design all along). He leadeth me beside the still waters Can't keep a good man down

It was past 11:00 o'clock when we left camp. I asked Daniel what he'd like for lunch. He wanted a cheeseburger, so we headed for Steak 'n' Shake. After lunch, we popped into Walmart to get a few things, and it home again.

Uncle Zach's coming over this evening. We're making pizza and playing games. Daniel's trying to figure out why Granny's not available all the time. The idea that she has to work while I don't is something he's still puzzling out. But we're having a great time so far, and Granny can take over the Werecub Rodeo for a while in the morning while I sleep in.
Collapse