This classic PvP strip features Skull the Troll and his friend Brent Sienna (in his snide and skeptical stage).

He is risen, indeed.

Here is the pump organ I bought a few years ago, thinking I had a plan for it. Not so much these days. So, I'm looking to sell it to someone who would appreciate it.

I bought it from a guy who really fixed it up -- all except for one dropped key. The pump action works. And it's a very nice piece of furniture, with the candlesticks and all. 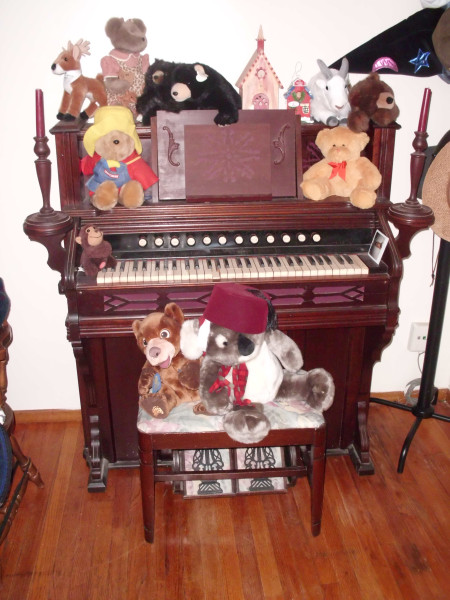 This being Easter, somebody posted an article about the supposed pagan origins of Easter. This is a misunderstanding of something Bede wrote in his History of the English Church and People. Bede said that Eostre was the name of a pagan goddess whose month was Easturmonath (April). Bede may, in fact, be mistaken about this, but let it stand. Easter (German Ostern) is one of a very small group of Old English words for religious concepts that were either dropped by the Anglo-Saxons upon their conversion, or became fossilized so that even the Anglo-Saxons themselves forgot what they meant.

Other terms that lost their meanings include Blotmonaþ (November), where blot was a term denoting a pagan blood sacrifice; coincidentally, November was also when flocks and herds were culled for the winter. Then there were herig/hearg, a pagan sanctuary, enduring only in modern names like Harrow-on-the-Hill, and stow, as in Cheapstowe, originally an outdoor worship place in the woods but ultimately just a "place." Frea was the name of one of their gods -- it means "the Lord," but significantly, after the conversion of the English, it just meant a worldly lord or prince; knowledge of the divine Frea was forgotten.

Specific terms for God or the gods show the same tendency. The pagan Old English called one of their gods an os (plural esa). This is cognate with Old Norse Æs, Æsir. It survives in a few old-fashioned personal names like Oswald and Oswin, but is otherwise totally extinct. After their conversion, the Anglo-Saxons referred to God (German Gott), a word related to the word god meaning "good." By back-formation, when they had to refer to pagan gods, they now said merely, god (plural godo) -- "god, gods" -- as we do.

Meanwhile, it took a while to decide what, exactly, to call the God preached by the missionaries. Crist, of course, was an easy transcription, but more often -- at least in the early days -- they referred to Christ as Hælend, a word related to hæl, "salvation, welfare," and generally meaning "Savior." In Beowulf, a work very careful about naming the God the characters aren't supposed to know yet, God is Metod, the one who metes out the fates of men. Latin Dominus was mostly translated as Drihten -- a military leader or prince. Finally, Hlaford was adopted -- a word that means "loaf-ward," the master who distributes bread to the workers -- which is the ancestor of our modern word, "Lord."

As for the use of pagan gods in the names of the week, you have to understand that this was a translation done by Christian monks based upon their understanding of Latin literature. Caesar and others had written (often in garbled fashion) about ancient Germanic gods, and had equated some of them to the gods of the Latin pantheon. Tiw was equated to Mars, Woden to Mercury, Thorr to Jove, and Friga to Venus. There was no Germanic equivalent to Saturn, so Saturn got to keep his day, along with the Sun and the Moon. The point is, this is not authentic surviving folk belief; this is the book-learning of a bunch of persnickety scholars. If there had been the slightest chance the Anglo-Saxons would have still been moved to worship any of these gods, the translation would never have happened. Indeed, so converted were the ancient Anglo-Saxons that about all of their pre-Christian belief and practice we can find are these few linguistic remains. There are almost no actual artifacts or rituals, even at the level of folk belief.

Meanwhile, many concepts were expressed in native OE words. Ærist = "resurrection," from arisan "to arise." Biddan and its relatives gave us "bid, prayer" and eventually "bead" for the little object on a string that one moves at the conclusion of each prayer of the Rosary. A decree or judgment was a dom, so the Day of Judgment became Domesdæg, "Doomsday." The native word for "baptize" was fullian, which referred to being made full of God. Gæst (spirit) gave us gæstlic (spiritual), as well as ModE "ghost." Godspell (good news) > "gospel." Halig (holy) > halga (saint). Hæðen (heathen), one who lives rough -- out on the heath -- a rover or outlaw, paralleled the original meaning of Latin paganus -- somebody from the sticks, an unconverted rustic. The Anglo-Saxons called the bread of communion husl (housel, a "little dwelling" for Christ), and partaking of communion was huslgang. When it came time to translate "Paradise" in the Book of Genesis, somebody coined the word neorxnawong, whose roots are from ne wyrcan -- a place where nobody had to work. Rihtwisnes -- right-wise-ness -- is "righeousness." Rod became rood, a cross. To hang on a cross -- rodehengen -- was to be crucified; meanwhile, to take the cross -- rodetacn -- was to make the sign of the cross on yourself. The Trinity was þrinnis (three-ness). Morningsong (Matins) was uhtsong, from uhta, "dawn." And the precious viaticum, the communion for those about to die, was wegnest, the provisions packed for a journey (weg, ModE "way"). All of these are faithful and apt expressions of Christian practices and concepts.

In fact, I can think of only a few cases in which the OE word expressed a concept that has caused us difficulty in understanding the original meaning of the biblical concept. Sawol (soul) might be one such. A fair number of people get confused about the differences between soul and spirit, not realizing that soul refers to the personhood of the individual, not really something the OE would call gæstlic. Then there's woruld, used to translate Latin saecula and Greek aiwn. It means "world," of course, but like saecula and aiwn it can also mean "age, cycle." OE on worlda woruld therefore means "unto the age of ages," just as in saecula saeculorum does, but when it became ModE "world without end," it seems to imply that this world will not end, when this world isn't the world being talked about. But perhaps no OE word -- no Germanic concept -- has caused as much confusion as hell. Hell was the Germanic realm of the dead, especially the unworthy dead. It could, with caution, be used to translate Hades or Sheol, but unfortunately the same word was used to translate the concepts of the fiery pit from the Book of Revelation. We have had problems trying to explain the Christian doctrine of hell ever since, and we still find ourselves struggling to explain what we mean by the line in the Apostles' Creed that says Jesus "descended into hell."
Collapse