Last night I attended the second meeting of an ad hoc committee called to put together a Bishop's Luncheon for Scouting in Indy. I applaud the enthusiasm and dedication of so many of our UM Scouters. They want their church to do well, and to do right. But so much of what I see in UM Scouting Ministry these days is just shambolic.

The people who care about Scouting don't know how to do ministry. The people who know how to do ministry don't care about Scouting. The laity and the clergy in the same church speak different languages and move in different circles. And all sorts of people want to grab hold of the piece they can reach and move the whole UM Scouting Ministry community, without understanding or coordinating with other people interested in doing the same thing.

It didn't have to be this way.

I could tell you why things are as they are, and what should have been done to make them better. I could rehearse the ups and downs of my thirty-six years of leadership in this field. But the lessons I have tried to teach are all coming up against a deadline. There may not be a United Methodist Church in two years, or at least, not one I can feel comfortable trying to be a leader of. At this point, trying to get everybody to work together toward a worthy goal is like leading a group of tourists in an exercise class on the deck of a sinking cruise ship.

My reach has shrunk. I do what I can do to move the ball forward from where I am. We are still doing important things. We have a Conference Scouting Retreat scheduled for next August. We're trying to finance a Jamboree in Congo in memory of Bob Walters. I am trying to help with this Bishop's event -- out of sheer loyalty (I have little enthusiasm for the project). I have completed the non-profit tax return for The Indiana UM Pathfinder, Inc. But in two years' time, the whole denominational apple cart may be upset, and all the people who actually know how to do Scouting as ministry may be scattered, depending upon their perception of their various spiritual needs and loyalties.

At the beginning of this quadrennium, I offered to stay on as the Secretary-Treasurer of The Pathfinder, since we had just completed incorporation and were in process of obtaining our tax-deductible-donations letter from the IRS. I had set all that up, and thought I should stay on to shepherd the process through for a while. Plus, my daughter is the President of The Pathfinder, and I want to support her leadership. But if we fail to dodge the iceberg headed toward the good ship UMC, or if the Conference UM Men take over the whole shebang and make a bollocks of it, this quadrennium is my last, and what happens afterward I will take no further responsibility for.

I was President of the National Association of United Methodist Scouters from 2008-2012. Holding that office also made me a Director of the General Commission on United Methodist Men for the quadrennium. For several years before becoming President of NAUMS, I had said that while I was sure that GCUMM knew a lot about Men's ministry, they sure didn't know much about Scouting ministry. By the completion of my term, my opinion had changed significantly. I now understood that they didn't know much about Men's ministry, either.

Tomorrow is Deanne's birthday, so I'm coming to the end of this series of pictures. Today, we find her with Hera, our tiny bundle of deadliness. Hera continues to keep the rodent population under control (if we let her outside, there probably wouldn't be any squirrels or rabbits in the neighborhood, either).

Deanne has taken to watching nutritional videos. It's her primary entertainment these days. And Hera has decided that she likes to watch videos with Mommy. Sometimes, she even manages to turn on the computer when Deanne leaves it lying on the bed. It's a special bonding time for the two ladies in my life. 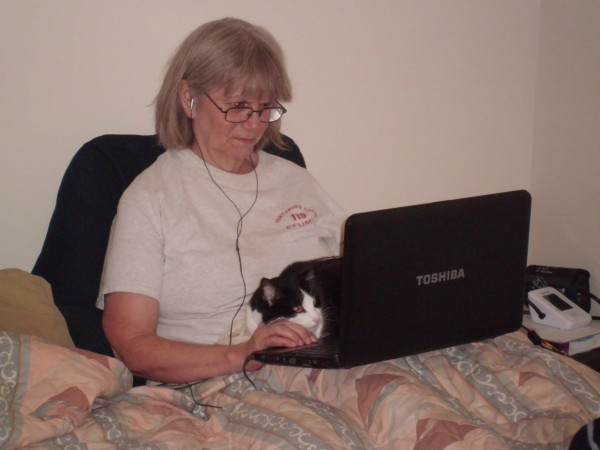