Gucci, the fashion company, was severely criticized this week for putting turbans and hijab-like garments on white models in a fashion show. Sikhs and Muslims decried this as cultural appropriation. Never mind that turbans have come and gone several times in women's fashion before now; what are we to make of this?

Ownership of certain things -- food and dress come to mind immediately -- is a touchy issue these days. On American college campuses, some black students have said white female students shouldn't wear hoop ear rings or tightly braided hair that looks like dreadlocks, because these belong, in some sense, to black girls. Meanwhile, you have all kinds of nations insisting that the characteristic food products of their regions have an exclusive right to the names that describe those products, names like champagne and Scotch. If people make sparkling white wine or malt whisky in other places they have to call them something else.

Now, if people adopted the dress or food or customs of another people in mockery, you could see their point. But most of the time, the adoption of other people's cultural markers is done in admiration. Yes, but you don't understand what you're appropriating, comes the reply; you're not doing it right. People who make such complaints ignore the historical interplay in all cultural contacts.

Take Morris dancing, that quintessentially English art form. People (no longer exclusively men) wear bells and ribbons and practice leaping steps as they wave kerchiefs or whack about with staves or mock swords. Alongside the performers are people dressed as characters out of the Robin Hood story, as well as traditional fools and riders of hobby-horses. What could be more peculiarly English? Except it's not. Morris dancing was created by English people in admiration of a particular style of Spanish dance when Prince Arthur, son of Henry VII, married Catherine of Aragon. For a while, all things Spanish were the rage in England. ("Morris" is a corrupted form of "Moorish." Shades of the Alhambra.) No doubt they "got it wrong," which is to say, they made it uniquely their own. So, should the English stop Morris dancing, because they appropriated it from Spain?

Immigrants to America have brought many things here. Usually, their distinctive foods are among the first things to be assimilated. But things happen to their food as it is adopted by other Americans. It mutates into new forms. For one thing, we add meat to everything. "Mexican" food in America is far more likely to have beef in it than "Mexican" food in Mexico. Other ingredients may change, too. The humble taco is now very Americanized. But at the same time, other groups have taken it up and done other things to it. You now have fish tacos, which is something nobody ever thought of before. And Korean tacos (who'd'a thunk it)!

Meanwhile, the immigrants themselves make changes in their cuisine. Fortune cookies and General Tso's Chicken are only now becoming popular in China. They were invented here by Chinese cooks adapting to their new environment. Chicken Tikka Masala is an Indian dish, but it was invented in Scotland, when a customer asked an Indian restaurateur to make a gravy for his chicken dish.

The dynamism of cultural exchange produces new things. Irish step dancing is taken over by American blacks and becomes tap dancing, which becomes all the rage among white Americans when they see white movie stars doing it. Jazz starts among southern blacks in America, but is taken up by the world; one of the greatest jazz artists of the world was Django Reinhardt, a Romani French musician born in Belgium. Lower-class Latinos in southern California invented the zoot suit, and for a while, it became fashionable among white Americans all over the country.

The Japanese love to sing the Ode to Joy -- in German -- at New Year's. The men's business suit of coat, tie, and trousers descended from the court fashion decreed by Charles II has become ubiquitous around the world. I saw a news photo years ago of a street in Rome, where a neon sign over a restaurant proclaimed "New York Style Pizza" was on offer there. In Saudi Arabia, people play golf -- a Scottish game -- and because there is no grass in the desert, pour crude oil around the holes to create "browns" instead of "greens." India exports one of the finest malt whiskies in the world -- Amrut -- but they can't call it "Scotch," even though that's what it is. In my youth, the sitar, an Indian instrument, was mainstreamed by the Beatles. Yogurt was considered a weird ethnic food in my childhood, and now everybody eats it. An American refrigerator will often have a bottle of soy sauce in it, right next to the ketchup.

Sometimes, dominant cultures impose their styles on others. Just as often, other cultures adopt and adapt the styles of a dominant culture in admiration. Meanwhile, food, music, fashion, and language are constantly moving up the social scale and in toward the center of every society as the dialogue between the Center and the Rim goes on. Cultural appropriation is not some sin against other people. It's the way the world works. To attempt to stop it is like King Cnut commanding the tides.

It's been a soggy week. Floods are out across the land, yards and fields are waterlogged. Yuck. I'd much rather have some nice late snow than this cold monsoon. I'm just hoping that we don't get five or six months of rain straight through like we did last year.

For those who see everything through the prism of climate change, I would recall to their minds the first two lines of Chaucer's Canterbury Tales:

Whan that aprill with his shoures soote,
The droghte of march hath perced to the roote . . .

In modern English, that would be, "When April with its sweet showers hath pierced the drought of March to the root . . ." In other words, when Chaucer was writing the Canterbury Tales, c. 1387-1400, March was considered to be a dry month, followed by "April showers" and all that.

But then, Chaucer lived when the climate had begun growing colder. In AD 1000, the height of the Medieval Warm Period, people were growing wine grapes in England. By the early modern period, we were in the Little Ice Age. The tipping point, when crops began to be affected by shorter growing seasons, coincided with the coming of the Black Death, in the mid-14th Century. It was a disastrous period, when everything seemed to be going wrong, and getting worse. The depths of the Little Ice Age coincided with the colonial period in America. Things started to warm up in the 19th Century.

We may indeed be entering a warmer, wetter period. Alas for those of us who like things cooler and drier.

Still posting a bouquet of pix from days past of Deanne. Here she is with our cat Lightning, who died suddenly in August, 2016, age 6 1/2. He was always insufficiently socialized. Deanne called him our Borderline Personality Disorder cat ("I hate you! Don't leave me!") I said he was a "social leopard," in Mammy Yokum's words. He was very needy and affectionate, until . . . He was known to suddenly strike at people without warning. Our grandson James was terrified of him.

Yeah, we take in the hard cases. We loved our little Lightning, bad manners and all. He was taken from his momma way, way too early. We got him and Hera (who was about a month older) from the local shelter.

I was on my way to Wilderstead for an overnight when Deanne called me on the road. She had just come home to find Lightning dead. She wanted me to turn around and come fetch him, then return to the holler and bury him. I explained that I was two hours down the road. So she put him in a pillowcase and drove out to meet me at the cabin. By the time she arrived, I already had his grave dug next to Sassafras. 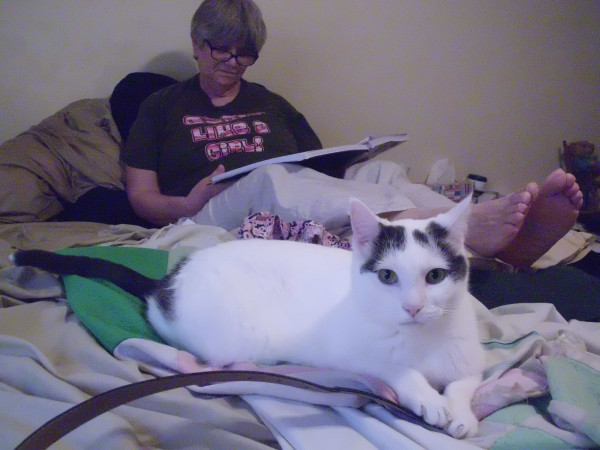