This is from "Cross Examination," published in God in the Dock. It is a passage from an interview in May, 1963 which C.S. Lewis granted to Sherwood Wirt of the Billy Graham Evangelistic Association; Lewis died the following November. I thought it would be of interest, since so many are posting retrospectives and remembrances of Graham's ministry.

Do you approve of men such as Bryan Green and Billy Graham asking people to come to a point of decision regarding the Christian life?

I had the pleasure of meeting Billy Graham once. We had dinner together during his visit to Cambridge University in 1955, while he was conducting a mission to students. i thought he was a very modest and a very sensible man, and I liked him very much indeed.

In a civilization like ours, I feel that everyone has to come to terms with the claims of Jesus Christ upon his life, or else be guilty of inattention or of evading the question. In the Soviet Union it is different. Many people living in Russia today have never had to consider the claims of Christ because they have never heard of those claims.

In the same way, we who live in English-speaking countries have never really been forced to consider the claims, let us us say, of Hinduism. But in our Western civilization we are obligated both morally and intellectually to come to grips with Jesus Christ; if we refuse to do so we are guilty of being bad philosophers and bad thinkers.

Yet another pic for Deanne's upcoming birthday: Here she is with our dog of many years, Sassafras.

Deanne has always been a dog person. She likes cats, but she feels somewhat incomplete without a dog. I have always been exclusively a cat person. We argued back and forth about it for years, and then one day, she brought home a puppy. A little golden puppy that lay on my chest. I fell in love, despite myself.

Sassy's grandmother was a Chow, and it showed with her ruff and her spotted tongue. But her other ancestries showed up in various ways. She had one brown eye and one golden eye. She had stubby little front legs like a Basset Hound, a back end and tail like a bird dog, and she wanted to pull like there was some sled dog in her. She would try to go on point, but couldn't quite figure out how to do it. She would try to follow a trail, but her nose wasn't reliable. Raised by cats, Anna has said she has seen Sassy lick her paw and clean behind her ears. She was such a mixed up thing. She was utterly herself. And she was the onliest doggie that I've ever loved.

Deanne still talks about getting a dog. I tell her, wait until we've moved out to the holler someday. Right now, we don't have the time or energy to deal with any more animals. So, some day, I expect we'll have another dog out at Wilderstead. In the meantime, Deanne deserves the credit for finding this special girl. 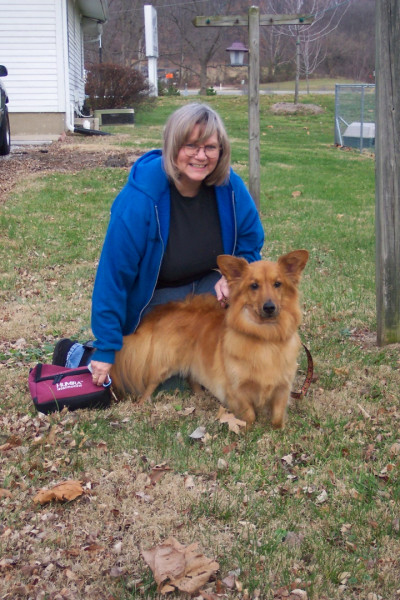