What keeps a Scouting Unit going? What essential thing do you have to have to maximize the possibility of continuing on the scout trail? What must you do, even if you neglect other stuff?

Years ago, I remember hearing that the most important thing in a Scout Troop's year was going to summer camp. Experience showed that if a Troop went to camp, it would most likely re-charter. The program would go on. Boys would re-up for another year. New boys would join in order to go to camp. A Troop that didn't go to camp was on the endangered species list. Whatever else in terms of program or advancement or leadership that Troop achieved, if it went to camp, it would most likely survive; if it didn't, it might not.

That's how important summer camp is. To Boy Scouting. Venturing is a little different.


Key Number Three to Venturing Success: Taking Your Show on the Road

In the summer of 1996, I was on the faculty at Philmont Training Center, helping lead the United Methodist Scouters Workshop. I walked over to the Camping Headquarters, just to see how things worked over there. I'd never done a trek at Philmont, and I was curious how that worked. I stopped in the office and asked how one signed up to do a trek. I knew there was a waiting list and all that. I wondered how complicated it might be. I was told that if I had fifty bucks, I could snag a vacancy for the next year that day and pay the balance when we got home. (Note: you can't do this any more.) I laid my money down, and went home with my 17-year-old daughter to start an Explorer Post for the express purpose of going backpacking at Philmont.

Our Post trekked at Philmont in 1997. In 1998, we snagged a Council contingent spot and went back to Philmont. When we came down out of the mountains, we were told, "Congratulations! You are now Venturers." Our response was, "Cool. What's Venturing?" Nobody knew yet. It was all sort of free-form, like Exploring.

In any case, we had already found that doing a form of Scouting that emphasized high adventure was great. We decided that we would stay in training as if for Philmont throughout the year. And every year, we would go somewhere amazing. What we found was that we spent half the year planning, conditioning, training, and then performing our big summer trip. Youth joined in order to go on these amazing trips. (Where else could you find someone who could take you such places?) Youth bonded with each other on these adventures. Magic happened. I began to say, "I can only guarantee two things on a trip to the wilderness: you will meet God; and you will meet yourself."

Youth came and went, but we always seemed to have enough to pull off the next big trip. One of the struggles of Venturing is that no Crew seems to grow very big. But then, if you assume that in order to be a healthy group, 75% of your youth have to be able to go on your big trip -- and crew sizes in the real wilderness are kept small because of the fragility of the environment -- then keeping 10-12 youth registered and taking 7-8 of them on any given trip is about all you can maintain.

Youth grew together and learned from each other. Unfortunately, that meant that periodically, they would all age out together. Venturing Crews are like high school youth groups in church. It becomes difficult to add new 14-year-olds to a tight group of 18-year-olds, even if the 18-year-olds are trying to be friendly and inclusive. So every few years, college and romance and jobs would cause a "colony collapse," and you'd basically have to start over with a whole new bunch of younger youth.

Venturing eventually developed a uniform, though it never became a requirement. It developed an advancement system, which we used extensively. The Council made some attempts to do Venturing programs (I had a large part in those early efforts; for two years, I was Council VP for Venturing and Older Youth) and offered training. But despite the fleshing out of the program, and despite the excitement, the buzz, generated by Venturing, the number of Crews remained very small.

The typical experience would be that a leader or two and a youth or two would get all excited and start a Crew. (I was told once, the typical Crew President is a 16-year-old girl with an older brother in Boy Scouting; the typical Crew Advisor is her father.) But after (at most) a year, the Crew would sputter and start to fail. Soon, it would disappear. What happened?

I asked where they'd gone, or where they were planning to go. What adventures had they had? Oh, they could never get everyone together to decide on that, they said. Some were just vague about it all. They hemmed and hawed about taking the big trip. And I realized, They have no clue how to do this. They think they can just sign up and wear the shirt and the magic will happen, somehow.


High Adventure is the Heartbeat of Venturing

Whatever else Venturing does, if it doesn't do high adventure, it will fail. This is what kids join for. It's what bonds them together. It's what builds your reputation, attracts others to you. It's what helps ensure that you'll re-charter for another year. You must learn to take your show on the road. If you don't do an annual Superactivity, then your Crew is on life support. It won't last much longer.

And this means, that the most critical skill of the Venturing Advisor is the ability to manage the big trip. And that's a skill set not just anybody has. Yeah, we say that the motto of Venturing is, "Lead the adventure." And we say that the youth are in charge; they plan and they lead, and you just support. Yeah, well. In order for the youth to lead, they have to be equipped to lead, and that's an adult job. And in order for the youth to plan effectively, an adult who knows what is essential in the plan must be able to look over the plan with knowledgeable eyes, or you are going to get in trouble. The only real skillset a Scoutmaster needs to take Boy Scouts to camp is the ability to drive them there and sleep in a tent in the campsite: all the rest of the day, the fully-staffed summer camp will keep them busy. (We're talking minimums, here, not desired outcomes.) But to lead a high adventure trip -- backpacking, canoeing, sailing, touring, whatever it might be -- an Advisor has to have certain credentials (CPR, Wilderness and Remote First Aid, etc.), know how to move a group cross country, how to set up reservations for campsites, get backcountry permits, know what gear to bring (and what not to bring), and (perhaps most difficult of all) know how to cost out a trip.

Not many adults have that skill set. And there is no training course in BSA that aims to provide them with it. Not even Powder Horn.

This is the sort of thing a District Roundtable could do, but no District has enough Crews to form a breakout section. So, it needs to be done on a Council level, at least right now. We need to bring Venturers together to show them where they could go, and teach them how to make the magic happen.


So, to review: my Three Keys to Venturing Success are,

1) Concentrate on extension, not retention;
2) Set the Crew up as a free-standing Unit;
3) Equip leaders to deliver the Venturing program, whose most critical component is planning and pulling off the annual Superactivity.

Some notes on doing a Superactivity

A Superactivity is more than a weekend. I'd say five full days is the absolute minimum, in order to get the Crew working together in a long-term mode. I've had some Superactivities that lasted up to sixteen-seventeen days, though that can be a bit long (people wear on each other after a while). Personally, I think nine or ten days is a good average to shoot for. If you wrap it around two weekends, you can do a mega-trip that only requires most adults to take one week off from work.

Backpacking and canoeing are obvious modes of trekking. But you can build your trip around mostly touring. Where do you want to go? What do you want to see? What do you like to do? Obviously, we're looking for something outdoors -- we camp wherever we go -- but visiting historical sites is also cool. Even when we're going to the backcountry, we stop to visit stuff along the way.

You don't have to top yourself every year, and you don't have to charge an arm and a leg for it. A backpacking trip in a nearby wilderness area is pretty cheap. Over the years, my Crews have tried to pull off the Astounding (like, say, a trip out of country or to a BSA high adventure base) every 2-3 years; in between, we do easier and cheaper stuff.

As fun as Boy Scout summer camp is, it's not high adventure. Don't assume that any camp, no matter how much "older boy program" they offer, can be a substitute for taking your Crew off on their own.

Candlemas? The Presentation of Christ in the Temple? Well, yes, but also, it's

So, winter will be over with in six weeks or a month and a half, whichever comes first. 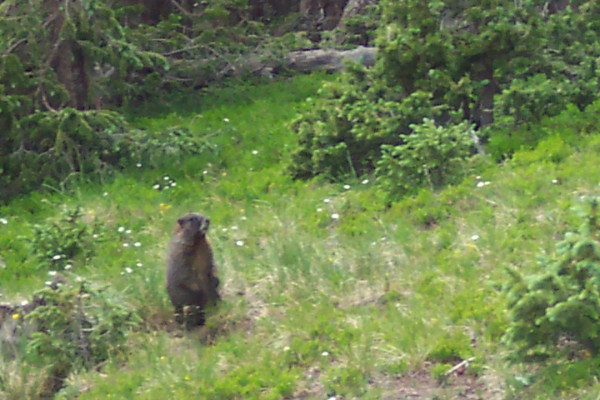