We try to stretch the Scouts' culinary horizons at the Winter Rendezvous. Over the years, we've served them all kinds of dishes featuring many different meats: beef, pork, chicken, turkey, yes; but also bear, goat, alligator, crawfish, venison, rabbit. Speaking of rabbit . . .

This year, we whomped up a tourtiere, which is a French Canadian meat pie usually served at Christmas and New Year's. Sort of a meat loaf en croute, though with a lot of spices. It can be eaten hot or cold. It usually has a base of ground pork, but there are regional varieties, and oftentimes game meat is added to enhance the flavor (and stretch the quantity). In the end, you can put about anything you want in it. Since we have a kind of voyageur/rendezvous/early American frontier vibe to the Rendezvous, I thought something from the Lower Canada (as it was known in the early days of the US) would be appropriate. And since one of my Scouting buddies has been on me for the better part of two years to put rabbit back on the menu, I decided to put rabbit in our tourtiere.

We got a lot of compliments on this pie, and at least one request for the recipe. I'm happy to share it, but doing so is going to require a bit of editing. When you're making food by the yard, sometimes recipes get changed because of the sheer quantity you're dealing with (we started with 40 lb of whole rabbits and 30 lb of ground pork to make 33 pies). And when you're working against the clock, sometimes picky procedures outlined in the original recipe you're expanding have to be foregone in the interest of putting the doggoned thing on the table. Now, I could tell you exactly how we made this pie, but you'd have to reduce the quantities and stumble through all of our short cuts to figure out how to make a single pie at home. I doubt you'd want to do that. So here's my best rendition of how I'd make the pie if I were trying to recreate it one pie at a time, with more or less the same results.

The meat: you'll need about 2 lb of meat; it kind of depends on the size of your pie pan, and you can always pile it higher. You can do all ground pork, or a typical meat loaf mix of pork, beef (and perhaps veal), or whatever. Our recipe would start with:

1 lb ground pork, unseasoned
1 lb rabbit meat (a whole rabbit will have about a pound and a half of meat on it)

Cook the rabbit (we stewed ours in plain water). When cooled slightly, remove meat from bones. When completely cool, chop or shred meat.

Boil potato in water and salt. Remove potato and roughly mash. (We were in a hurry, so we just mashed the potato in the water and went on, but if you want to preserve the texture, I'd recommend removing the potato.)

Add meat, onions, garlic, and spices to potato water. Bring to a boil, reduce to simmer 35 minutes or so until liquid evaporates and onions are tender. Check seasoning, adding salt if desired.

Add potatoes back to the pot, stir in gently, let cool a bit.

Stuff into bottom crust. Seal the top, adding vents to coffin crust. For extra browning/prettiness, you can brush an eggwash over the top, like we did. Bake at 375 degrees for 45 minutes. Serve hot or cold. 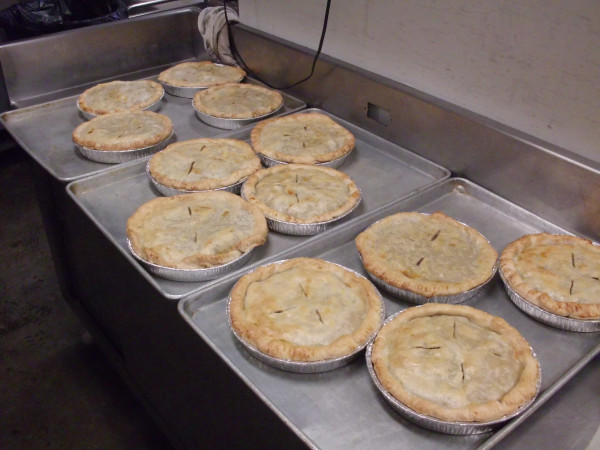 One of the sites I follow asked what the highest elevation was that the readers had hiked to. It got me thinking -- and hankering after mountains. Here's a list of most of the high places I've hiked up to, along with their elevation in feet.

*Hiked from the parking lot
**Took the train up, hiked back down to the village
***Drove over, but got out to take a pic of the sign; couldn't believe they posted one
Collapse