LJ hasn't allowed me to upload photos to Scrapbook for many weeks now. I don't know what to do to get past the error message. And I can't find anywhere on LJ these days to ask the LJ mgt team what to do.

For some reason, LJ won't let me post photos to my Scrapbook right now. Very frustrating. I will just have to use words, alas.

The 2018 Winter Rendezvous was a resounding success, but it came with a lot of challenges for the kitchen staff. On the plus side, the weather stayed reasonably dry, so that all the Saturday events were held in snow (fun!) and the rain held off so that folks could leave this morning without getting stuck. We had around 515 total participants (plus staff? which would make it about 540?).

Anyway, Jeff B. and I got out to camp and started unloading more stuff about 1:00 p.m. Friday. The bad news that greeted us: no running water to the Dining Hall. Other buildings in camp had water, but not us. Ranger Ed and his wife brought us about twenty gallons to get started with. Later on, Scouts volunteered to bring us more coolers and bladders of water. We started right in, determined to cook no matter the circumstances.

We cleaned and set up and got things going as other kitchen staff arrived: Deanne; Kara and T.J.; Anna and Brian. That's really short-handed, but we were getting a running start. We put 40 lb. of rabbits on to stew, made over a thousand no-bake cookies, several dozen jalapeno poppers, and threw a bear roast in the convection oven. T.C. and his two buddies from college came rolling in about 7:30, I think. We put them to work charring brisket, which had to go in the ovens overnight.

I had brought a cooked boar's head from home, which we decorated with bay leaves and fresh rosemary (as per the carol). When it was time for the crackerbarrel, I led the whole camp in singing the Boar's Head Carol; well, they sang the chorus, while I sang the verses. When the time came to go through the serving line, those boys started hacking off bits of piggy with great abandon. After they had gotten almost all the flesh off it, Deanne cracked the skull open, and Anna started serving them slices of brain and tongue. It was a great hit. Also, the bear was phenomenal; thanks to Dan Deckard for the gift of it (he shot it in Virginia just this year). T.C. and his buddies didn't come to camp, so they went home, asking what time they should be there in the morning. The rest of us went over to the cabins and crashed for the night.

Six o'clock came way too early, but I struggled up to wrestle with the coffee maker and get the kitchen going. We started working on the staff lunch as well as the evening Feast, all at the same time. Two things were really worrying me: the fried fish and the tourtiere. Frying fish for 500 is about 3 hours or so of solid, meticulous work, and we were really short-handed -- more so, as T.C. & co. hadn't returned. And the tourtiere -- which is a French Canadian holiday pie (ours was to be made from rabbit and ground pork) is a multi-step process that was going to go right down to the wire.

Lunch was in hand and we were ahead of schedule (except for the tourtiere and the impending fish), when two things happened. T.C. & Co. showed up two hours late but ready to work, and the water suddenly came back on. The thaw had reached whatever pipe had frozen up, Hallelujah. I set T.C. and his friends to frying fish, following Phil R's instructions. It turns out one of T.C.'s buds had actually fried fish before, and he was familiar with the gear. I left them to it.

We plunged back into the frenzy of food prep. The lunches went out to the volunteers in the field (Coddle, Soda Bread, Bread and Butter Pudding). All the other entrees were making steady progress. The tourtiere continued to ride the ragged edge of disaster. We'd already cooked the rabbit; now we shredded it. We boiled and mashed potatoes. Then, we had to divide the pans of ground pork and potatoes. Finally, everything -- rabbit, pork, potatoes, and spices went into two huge squarehead pans, each holding about 40 lb. of filling. This simmered for a half hour or so. Then Anna led the filling of pie crusts. In all, we assembled 33 meat pies. Which then had to be baked in the convection oven.

I picked up a couple of tourist helpers. Zeke and Paula Sandlin came out to visit their troop and schmooze old friends. They were happy to help. Zeke busied himself keeping up with the demand for coffee, sweeping around the kitchen, doing other jobs that needed a hand; meanwhile, Paula helped Deanne cut nearly 100 lb. of potato wedges for roasting. Once the pies came out of the ovens, the potatoes went in.

Our deadline was 4:30 for the first seating. With mere minutes to spare, all the fish was cooked, the pies were out, the potatoes were done, everything was ready. We had set up the serving lines. The Scouts who were to help serve were there. The chafing dish fuel was lit. And there were no diners. We were non-plussed.

In turns out they were all down at the fire ring doing awards and chapel and a Wood Badge ceremony. Now, the schedule we had been given said first seating was at 4:30 and second seating was at 5:20. But the schedule everybody else was running on said first seating at 5:00 and 2nd seating about 6:00. So we stood around and watched the food slowly deteriorate in the chafing dishes while people yakked down below. One more thing to put on my "make sure you've checked before we start" list for next year.

There were other challenges -- things we forgot or mislaid or weren't given that we ordered, the clock in the kitchen still set on Daylight Savings Time, the fact that we ran out of onions and had to skimp them for the tourtiere, etc. But we persevered. We made good. And everything was great.

We had a lot of compliments on the tourtiere, and even a recipe request or two. We made 50 lb. of mac and cheese which the Cub Scouts (especially) simply inhaled (not a scrap was left). We had beef brisket and spice-crusted pork tenderloin. The fish was Icelandic cod and cooked to perfection. There was salad and green beans and no-bake cookies and banana pudding.

For the crackerbarrel that evening, we brought all the leftovers from the Feast and from the staff meals. And we started talking among ourselves -- already -- about next year's Rendezvous. It'll be the 25th annual, so we want to really make a show of it. Lots of crazy ideas were floated. Some of them will no doubt be cooked. And then it was time to collapse in bed.

I got up at 6:00 again this morning. I found Deanne already up, making coffee. We started portioning out the leftovers for people to take home, cleaning out warming boxes and reach-in cooler. A few staff came in to scrounge breakfast. And then we started cleaning. We scrubbed and swept and mopped that Dining Hall like pros. Ranger Ed was delighted. We have a high reputation to maintain, not only as cooks but as workers, and we showed our best.

At this point, I have to say how proud I am of our team. We are happy to use youth help (even 7-year-old Daniel helped serve; I even saw him help cut bananas for the pudding), but the core of our team is an experienced group of young adults and no longer young adults. We don't get upset when things go wrong, we get busy. And we know enough to trust each other with important tasks.

So, we're all home now. I feel asleep in the lounge chair because I couldn't stay awake sitting up at the kitchen table. After a couple hours' nap, I managed to take a shower. And now, I am catching up on writing this post. I hurt, but I feel good. It was fun. I look forward to doing it again -- but not right now. 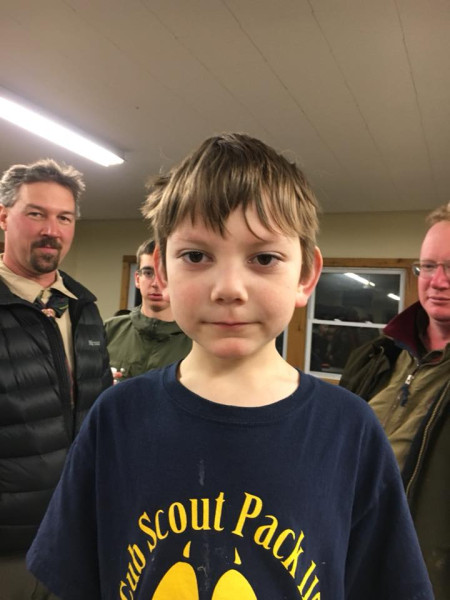 Well, I found a workaround to post this pic of Daniel at his latest Rendezvous.
Photo by Paula Sandlin.
Collapse