I went out to the peaceable kingdom yesterday and stayed overnight. The weather cooperated, and I got the fourth course of block done on schedule. No more mortar work now until spring. But there's still a lot of cleanup work to be done in the holler, and I need to start backfilling around the undercroft wall before I continue laying block next year. 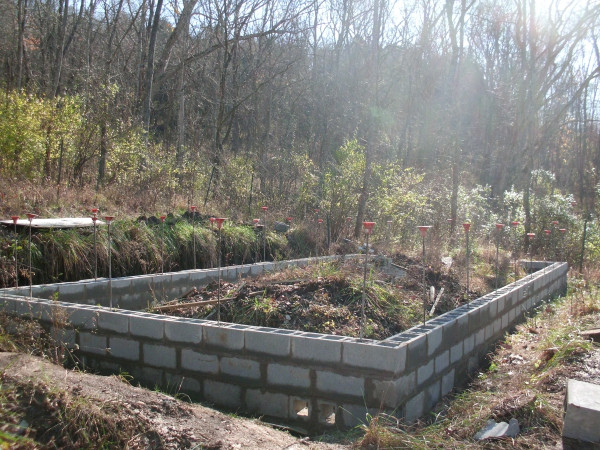 I have in my library a little book my father was given at some management seminar his company sent him to early in his Directorate. The training boils down to two lessons for executives. First, "Beware of leaping monkeys." This refers to the fact that all of us have many things to do, and these are like monkeys on your back. People come to the leader to complain, ask for help, and so on. If you, as the leader, say you'll take care of something that is their responsibility, then the monkey leaps off their back and onto yours. This makes one very popular with those one is leading, but it has deleterious effects. Leaders who try to be helpful and encouraging often make this mistake, and wind up with a whole troupe of monkeys on their backs that really belong to other people. Good leaders gently but firmly insist that other people deal with the stuff they need to deal with, and don't take responsibility for their tasks. Holding others' feet to the fire is very difficult for some of us in the helping professions, but ya gotta learn to do it.

But then, some things really are your responsibility, and among the many tasks you have to do may well be a BIG PROJECT -- one too big to get done in a rush. Big Projects are like gorillas. They take over everything else if you're not careful. They can run your life -- and they can ruin your life. And if you don't know how to tackle them, the tendency is to put off dealing with them, which just means they get bigger and meaner. So, the second lesson for executives is, "Feed your gorilla every day." Set small, regular goals. Targets. Bite off little pieces of the big job and get after them on a schedule, and eventually, the Big Project gets itself done.

The last few years found me overwhelmed with pastoral work and unable to do what I'd like out at Wilderstead. Progress was painfully slow. It's still slow, but instead of panicking or avoiding the work because it's so far behind, I've set myself small, regular targets that I can do, even if I'm old and tired. I gave myself a month off after retirement, but since then, I've gone out to the holler almost every week and slopped mortar -- for an afternoon, or an overnight.  One batch at a time.

Whether you're writing a dissertation or building a house or whatever your Big Project might be, this is the way you get 'er done. And with that, let me share with you one of my favorite poems.

It Couldn't Be Done

Somebody said that it couldn't be done,
But he with a chuckle replied
That "maybe it couldn't," but he would be one
Who wouldn't say so till he'd tried.
So he buckled right in with the trace of a grin
On his face.  If he worried he hid it.
He started to sing as he tackled the thing
That couldn't be done, and he did it.

Somebody scoffed:  "Oh, you'll never do that;
At least no one ever has done it";
But he took off his coat and he took off his hat,
And the first thing we knew he'd begun it.
With a lift of his chin and a bit of a grin,
Without any doubting or quiddit,
He started to sing as he tackled the thing
That couldn't be done, and he did it.