I laid block out at Wilderstead both Monday and Tuesday, which means I'm pretty wiped out today. It's not easy heaving around 28 lb. concrete blocks. The ten-inchers are even heavier. And, of course, driving over and back on successive days is a sapper as it is. But most of this feels great while you're doing it; it's only afterwards that the roof falls in. In fact, the only thing that really feels like it's beating you up while you're doing it is mixing the mortar. That's a job I'd be happy to bequeath to a helper!

I love being out at Wilderstead, especially in this weather. The quality of light in late autumn is something lovely. And though I sometimes get a little bored (no internet in the holler), I feel so at peace while I'm out there. God and I talk a lot. Most of what I say to him are words of amazement and thanks and love. The perplexities and fears that rattle around in my head and heart the rest of the time don't seem to have any much grip on me out there. It's my own peaceable kingdom, my hermitage, my retreat.

I'm hoping to get one more overnight of good weather to finish the fourth course of block. After that, I'll close down the construction site for the winter. I'll bring in my drinking water tank and clean up the cabin a bit (storing tools makes a cabin cluttered and dirty). 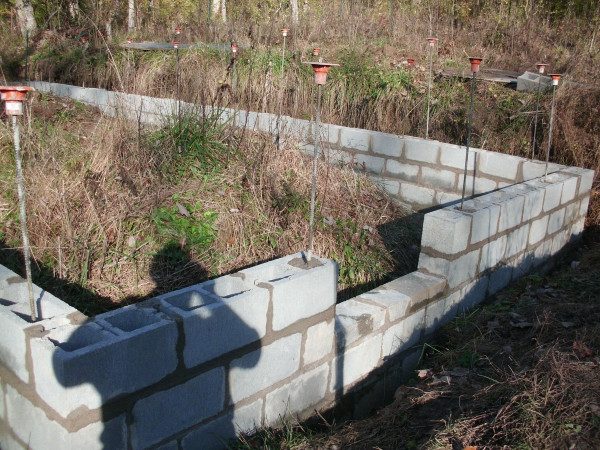 Meanwhile, I'm hoping to finish getting Downhill From Walmart put in order. My last real chore, other than some cleanup, is to hook up the dehumidifer hose to a house drain. We've been emptying the bucket every day (and sometimes, more than once a day) since we moved in. Once I've finished installing the hose and pump, I can forget most dehumidifier maintenance, other than washing the air screen every week.

And that will be that for a while. I'm going to get some minor surgery done in December and take six weeks or so off to laze around and/or party. I've earned it. I spent four months pitching and packing to get ready to move. I've spent the six months since cleaning, fixing, unpacking, pitching, and struggling to make this house comfortable. That's ten ruddy months of work. For that reason alone, this qualifies as the roughest move I've ever made. If I'd had an actual job to do other than what I've had on my plate, I don't know how I'd have done it.

We'll have our family together here for Thanksgiving. Then, I'm hoping to have a house-warming party in December here, and an anniversary shindig out at the holler in January. In between, since I no longer have a Christmas Eve service to preside over, I imagine we'll conform our movements to the grandcubs'.
Collapse