As I was driving from hither to yon this morning, I counted American flags. Today is 9/11, and we're supposed to fly the flag at half staff. I saw four flags on my way through the county flying at full staff, one at half staff. This irks me. Why do people put up flags and then fly them incorrectly? Why do they leave them up after the wind has torn them to tatters?

As a pastor, I preferred that my church not have a flagpole, unless someone was going to take on the responsibility for displaying the flag correctly. In the end, that just meant that in the several churches I pastored where we had flagpoles, it wound up my job to see that the flag was displayed correctly, and often my job to see it got replaced when it was too worn for use. Which is why I subscribe to an e-mail service that lets me know about presidential proclamations and special days concerning the flag.

And if it were just me who got irked by people flying the flag incorrectly, I guess I could live with that. But symbols matter because they speak in a particular language of their own. They convey things to others who know the code -- and even something of their meaning to those who don't. If a church I pastored was flying the flag incorrectly, others -- at least a few -- would notice, and that would reflect poorly on our faith community. Instead of communicating a positive message to everybody, we would be displaying a negative message, at least to some. And that brings discredit upon us and the faith we proclaim.

The same goes for religious symbols. Crosses, robes, colors of paraments, candles and such speak in a language of organized devotion. To those who know the code, they enhance worship, they assist in our connection to God. Even those who don't know the code sense something from the various colors and paraphernalia.

Of course, there are those who disdain such popery, as they think it. They imagine they can worship God directly, without using imagery and artifact. They ignore the fact that their buildings and their gatherings are just as full of imagery and artifact. But let that go. I don't really care if we worship in a bare room in our street clothes. But it pains me when I see symbols used in an incomprehensible pattern, because they look pretty that way. Or when I see churches heap symbol upon symbol, thinking that more is better. They use their symbol code to speak gibberish, or perhaps a private meaning known only to them. They're like Tom in The Prince and the Pauper, using the Great Seal of England to crack nuts.

Symbols matter. They aren't the end-all and be-all of things, but they matter. If you doubt this, let me tell you the story of a colleague named Joe, who years ago was working in leadership on an international event. He was at a big meeting of evangelical pastors in Brazil, where he was to be introduced as the contact person for this mega-event. He spoke no Portuguese, so he couldn't greet the gathering in words, but when he was introduced he stood and smiled, raising his hand in the "OK" gesture. You know the one: where thumb and index finger form a circle. Yeah, that one: the one that in all Latin America is regarded as the ultimate obscene gesture. A gasp went round the room, and poor Joe from the US had to be told later what he'd done.

So, yeah. Symbols matter. Learn to use them correctly, please. Or don't use them at all.

If it doesn't, paint it.

Today was a day for painting. Foremost among the jobs was the handrail I installed out front. I'm not thrilled with Lowe's attempt to match the old paint I used for trim; it looks more olive drab than jade (the original colors was actually called "Chive"), but what the hey. At least it's done. 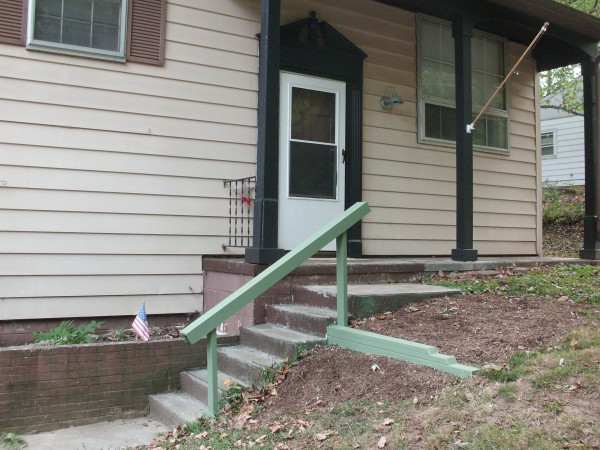 I also painted the cabin door, which is to be taken out to the holler. And, I got some Rustoleum silver paint and used it to recondition our old steel library cart, which we hope to give a new life to as a TV cart.

I need to do some mowing, as well as some sawing of boards. But you don't want to mow or saw on a day you're slapping paint around, so those jobs'll have to wait a bit.
Collapse