I worked a little on my cabin door today. I planed down one edge. I also added some metal braces to the corners to strengthen the frame. Gotta take it back out to the holler and fit it into the doorway again to see if it's ready to paint. Also got to see if I've got an old can of "chive" color paint -- apparently Olympic has changed the names of their greens. Ugh.

I also tackled this little project. We are very short on closet space around here, so I wanted a coat rack. The only place one would fit was behind the door on our front landing. And its foot couldn't be more than about 9 inches long, or it would interfere with getting past the door to the stairs down to the basement when the door was open. So, I'd have to custom-make a coat rack just to fit, and hope it would be stable enough not to tip over with the weight of coats and hats. 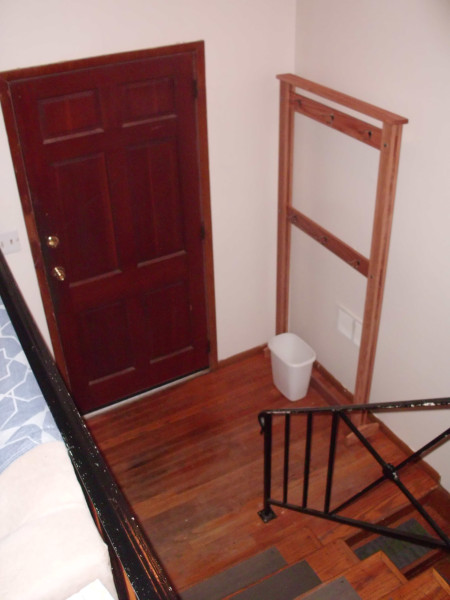 Ta-da! I banged this together today out of finished red oak. A few saw cuts, a few holes drilled, and some bolts and nails and screws, and there you have it. (Heavy, too.) I tried it with four heavy coats, and it remained free-standing and stable, so thank you, Lord. Good enough. After it was done, I oiled it up with boiled linseed oil for a natural finish, and there you have it.

Deanne will be home in a few minutes. We'll see how long it takes her to notice it there in the corner.

As The United Methodist Church -- indeed, all Western Christianity, but in particular, my own denomination -- tears itself apart, I offer the following sobering conclusions.

Progressivism, which is the latest incarnation of Modernism, no longer asks for an open mind and freedom to proclaim its insights; rather, it has decided that ever more questions are settled and that those who disagree with the progressive view should lose the freedom to proclaim their insights -- or at least, their legitimacy to do so, which in the field of religion is much the same thing. A new orthodoxy, an anti-orthodox orthodoxy, is being imposed upon the Church as upon society generally. It comes promising liberation but imposes the darkest of tyrannies, not only upon its opponents but also upon its adherents.

The evangelical wing of the church is in disarray. The so-called "left wing" of evangelicalism -- the people who read Sojourners and lecture other evangelicals about social responsibility -- are turning out to be merely progressives with a certain taste in religious rhetoric. As progressivism declares each new issue decided, they reliably fall in line.

Meanwhile, much of evangelicalism has lost itself in self-worship, in marketing strategies and prosperity gospels and attending to its own comfort. Even among those who form the backbone of resistance to the spreading heresy of progressivism, there is often the desire to cut a separate peace -- to carve out a comfortable little kingdom of their own, where they can dream their dreams, unhindered by having to follow the Book of Discipline they deride others for failing to follow. They look forward to dividing the inheritance when The UMC finally dies, and think that it will turn out well for them.

The faithful remnant of evangelicals, along with others who describe themselves as orthodox, traditional, or merely conservative, are trying to get serious about theology again. Or, to be more precise, to engage the Church theologically again. Instead of arguing policy, they are arguing doctrine; instead of proclaiming a strategy, they are proclaiming dogma. They stand to lose an awful lot in the coming smash-up, but they are the only ones who also stand to gain anything, for in finding themselves -- in finding again the gospel -- they provide the only possible basis for re-constituting the church after the darkness passes.

The pluralism of which The UMC was once so proud is simply the comprehension into one church of both truth and error. We all congratulated ourselves that we were too broad-minded, or too kind, to fight each other over truth; rather, we would simply demand good behavior from everybody while letting each person think for oneself. But what fellowship has Christ with Belial? as St. Paul asked. Behold, the person who teaches error does more damage, even if his or her life is blameless, than the worst sinner who teaches a right faith one fails to practice. We are all sinners, and so we can distinguish personal behavior from public teaching -- we have lots of practice at it; but when the teaching goes wrong, we can no longer distinguish what sin is, and all are left to grope in the dark.

I have many friends whom I love dearly, but who believe things which cannot be reconciled with the faith once delivered to the saints. I hope not to lose them as friends, but I foresee a day coming when we can no longer occupy the same church. As a retired elder, I may not face the same painful choices that may soon come to my serving colleagues, but whatever church I remain a formal member of, there are things I cannot force myself to say. To the teaching and to the testimony! Surely for this word they speak there is no dawn (Isaiah 8:20).

Over the last several years, I have spoken as honestly as I dared to my congregation, trying to ready them for the storm that is coming without simply freaking them out. Neither did I want to recruit people to a faction, but to Christ, so I kept my teaching as positive and hopeful as I could. Now that I no longer have the cure of souls in my charge, I am freer to speak my mind, though my words count for less than they did. I don't know how things will turn out with the bishops' Commission On a Way Forward and the called General Conference in 2019. But whatever happens with The United Methodist Church -- whatever happens to Western Christianity -- Jesus will never desert his Church, though she may be sorely troubled for a while. Assured of his faithfulness, my only duty is to stay faithful to him.
Collapse