In an online exchange yesterday on what passes for United Methodist ecclesiology, I quoted this old bit of liturgy -- still current when I joined The UMC in 1974:

The Church is of God, and will be preserved to the end of time for the conduct of worship and the due administration of God's Word and Sacraments, the maintenance of Christian fellowship and discipline, the edification of believers, and the conversion of the world. All, of every age and station, stand in need of the grace which it alone supplies.

I was immediately struck by the contrast with our current mission statement, which is "to make disciples of Jesus Christ for the transformation of the world." Evangelicals and orthodox UMs emphasize the making disciples part more, while progressives and liberals emphasize transforming the world more. Still, this is all very similar to what the GBOD used to call The Primary Task of the Church.

Now, I've preached and taught the Primary Task of the Church -- that is, making disciples -- on many occasions. And over and over, I have emphasized that you can't have more than one primary task. The main thing is to keep the Main Thing the main thing, and all that. Adding tasks and foci and whatnot leads to mission creep, which leads to ineffectiveness and ultimately, paralysis. Making disciples is, and must be, the main thing the Church is for. Right?

If you had asked an ancient or medieval Christian what the Church was for -- or if you asked many Christians in ancient denominations around the world today -- they would probably say that worship was the Primary Task of the Church. It's what we do. And it's what we will do in eternity, so we might as well get on with it here and now. Furthermore, the old monks would have said, that we uphold the earth by our worship, for by fulfilling our proper place in creation, we keep the world on track -- and by our prayers, we help shape it according to God's goodness. We make disciples primarily in order to focus them on worshiping the God who made us and redeemed us and who is known to us through Jesus Christ.

Now, when I've taught about worship, I've often begun by saying that in any performance there is an audience, and one or more actors, and a director and some stage hands. Then I've asked my class to say which roles are played by God, the clergy and other people up front, and the congregation. Inevitably, they say that the audience is the congregation, the actors are the clergy and others up front, and God is the director (or perhaps the author) feeding lines to the clergy. Wrong, wrong,wrong.

God is the audience, the one for whom we perform this act of worship. The congregation is the cast, the ones making the performance (remember, "liturgy" is from leitourgia, meaning "the work of the people"). The clergy and others up front are the director and stage hands, helping us all to act together to offer our worship to God. If you assign the roles wrongly, you get lousy worship, which doesn't do what it's supposed to. If you make the congregation an audience, you get worshiptainment -- and no transformation. And if you assume that what you have to say (or sing) on Sunday morning is what it's all about, you get talky. You fall in love with your own voice, and your own ideas, as if everybody came to church to listen to you, and it's your responsibility to make something out of them. Progressives may see worship as a political rally, with the preacher in the role of revolutionary (or "change agent," to use their euphemism); meanwhile, evangelicals may see worship merely as a revival service, and use their talents attempting to induce in their hearers certain emotional states leading to a decision point. In either case, God is left out, who ought to be the whole focus of our gathering.

(And don't even get me started on how the way we do worship devalues the sacraments. Note their placement in the liturgical formula this post started with.)

I would add a fourth role to this illustration: the world. And I would say that the Church -- by which I mean, primarily, the congregation -- exists between two audiences. God is the audience of our worship. The world is the audience for our witness -- witness here meaning, both personal testimony/invitation and good works/acts of love. The people of God are the primary actors in both cases. The function of leadership (which includes clergy, choir, Sunday school teachers, committees, and experienced role models) is to direct the activity of the people. We lead people in their worship of God, and we help them understand how to make their witness to the world effective. But the ordinary Christians are the primary actors in either case.

Where leaders assume greater importance is in the third function of the Church, which is making disciples. We can only disciple those who are already within the bounds of the Church. Until they be brought nearer, we can have no effect upon them. Bringing them nearer is done by the people's witness. So the clergy and others manage the initiation and instruction of the young and the newcomers. This is what we call spiritual formation. We train people in how to follow Jesus. Once they are effectively discipled, we continue the conversation as individuals wrestle with their individual calling from God -- which is what we call spiritual direction.

Making disciples is what equips the people of God to do their primary tasks, which are worship (directed toward God) and witness (directed toward the world). It is vital, but it is a means to an end. And even our witness is not an end in itself, but is directed toward bringing those outside in, to be discipled in their turn and assisted in offering their worship toward God, which is the final end of all our striving.

Changed from glory into glory,
Till in heaven we take our place,
Till we cast our crowns before thee,
Lost in wonder, love and praise. 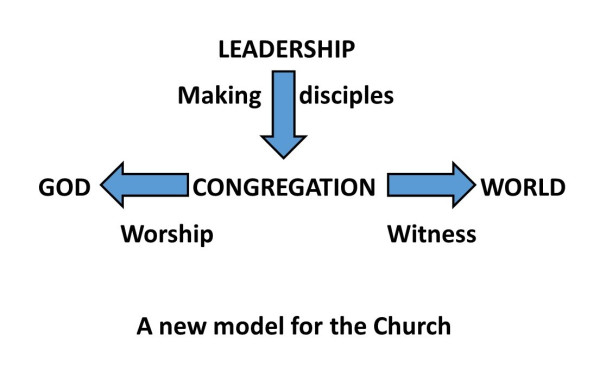