Our happy Crew cooks for the hordes

Well, we rendezvoused; whether it was winter is another question. With temps in the high 50s or even 60s, it hardly felt like winter. Luckily, the rain came early and left the same. So the 530 or so people out at Maumee Scout Reservation had lots of fun, anyway.

For us in the kitchen, it was good news/bad news. With the big coffee urn on the fritz and only a Bunn coffee maker to keep up with demand, truly cold weather would have had Scoutmasters growling at us all weekend if we'd had to keep up with the usual coffee consumption. On the other hand, the Scouts' appetites weren't as big as usual; but then, they weren't cold and trying to stoke their little furnaces. Sunday morning there were lots of leftovers to take care of, but I'm getting ahead of myself.

I got myself out to camp Friday with the rest of the food and kitchen gear a little after 3:00, only to find Anna and Brian and the grandcubs already there, sweeping out the dining hall. The camp dining hall is not exactly exposed to the elements, but nevertheless it collects dust in a truly impressive fashion. The first job of the kitchen crew upon arrival therefore is to clean. Which is also the last job before leaving.

We were going to be short-handed, as Crew 119 is down in numbers these days. On top of that, it was Brad and Kate's first Rendezvous. Come to that, it was Kate's first Venturing outing! (We break 'em in right.) But I had every confidence in everybody. There's not a slacker in the bunch, and we all have fun working together and take pride in what we create.

One of my first jobs was to get the chickens stewing for Saturday's Chicken and Dumplings. I had two cases (about forty hens), and they were semi-frozen still. Which is why I brought a hand axe: I used the back of the axe head to bash the mass of poultry enough to be able to pry the chickens apart by hand. Into several large pots they went.

Kara, T.J., Brad and Kate arrived about 4:30. I was making pizza for the staff's dinner. They were put to work right away. Anna had pre-made twelve double batches of her Danger Cookie (ginger/cayenne cookies) dough. This meant rolling out somewhere around 600 little tiny balls and baking them before Friday evening's cracker barrel. Anna warned them to wear vinyl gloves, since rolling out one peppery batch will really help your arthritis, but more than that will set your hands on fire. They see me rollin'
Kara, Kate, Nurse Judy, and Anna hard at work

Meanwhile, we had to prep 90 lbs. of beef brisket and put them to bed in the ovens overnight. Brad and Brian built a fire outside. After slathering the brisket with oil and adding a dry rub, they lightly charred the outside of each one before sealing them up to slow roast. When the chickens were done stewing, they were removed from the broth. Anna and Riley, a helpful member of Crew 170, deboned all that chicken and we added the bones and scraps back to the pots to simmer slowly all night. 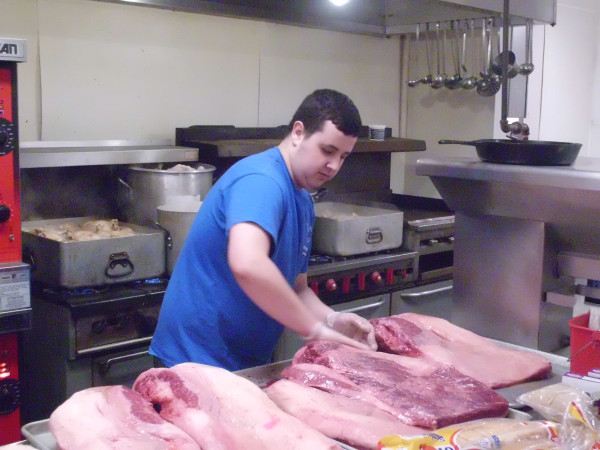 Friday afternoon and evening, we work on several different meals at once. There's a cracker barrel (snacks) to be served that evening, and there's the Feast for Saturday evening, but there's also Saturday staff lunch. We baked a whopping mass of Soda Bread and Irish Bread and Butter Pudding before lowering the temp on the ovens and putting the brisket in.

All too soon, it was time for the cracker barrel. We served Summer Sausage, Colby Cheese, Saltines, and sliced pepperoncinis -- the normal stuff. But we also had all those Danger Cookies. And Chocolate Bacon we made on the fly. And some Habañero-Ghost Pepper Cheese, which we offered in little, tiny chunks. Scoutmaster approved
You never know what we'll serve next

The cracker barrel provided us no respite. We were ahead on some things, but way behind, in the weeds, on some other items. We still had home-made granola bars to make for one of the Feast desserts. Long after the campers went back to their campsites, we were still working. In fact, we didn't leave for our cabins until way after midnight. 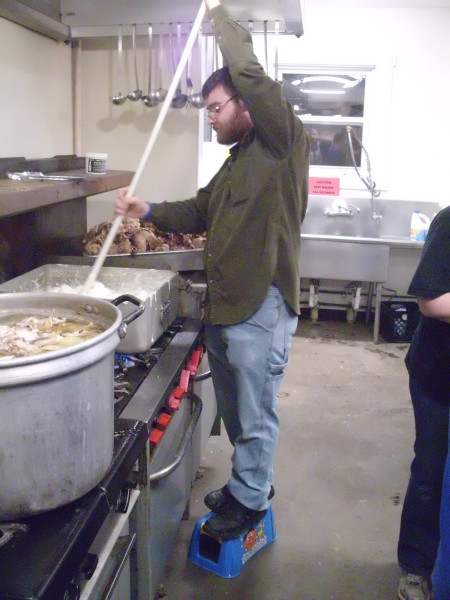 A stirring performance
T.J. mounts the podium and conducts a light-hearted confection

I was up at 5:30 the next morning and got to the kitchen early. Had to make Toad in the Hole for the staff's breakfast. Other kitchen crew members came staggering in between 7:00 and 8:00. And it was back at it. Had to make Coddle for the staff's lunch, and all the rest of the elements of the Feast. Pat and T.C. arrived by 9:00 and got to work. Garrett, a college student from another unit, volunteered to help us for the day.

We go through an immense amount of stuff to be sliced or chopped: 225 lb. of potatoes, 35 lb. of peppers, 40 lb. of Italian sausage, 75 lb. of onions, and on and on. I wore a little blister on the tip of the my right ring finger just from constant knife use. You don't need to know how to cook -- when you get past cooking for 100, it's not culinary art any more but factory work -- but you really need to learn how to use a knife properly. Thinking that you can't go wrong feeding men potatoes, I over-bought potatoes for mashing. It was a truly impressive amount of spuds. You might not think it, but cooking for a crowd requires a lot of upper-body strength. Do the Mash
Tell them Boris sent you

By 4:00 o'clock, we were closing in on our goal. Showtime was at 4:30, but the dumplings weren't done. Half of the bags of dough were ready, but half weren't. I told Anna to keep people prepping the pate a choux for the dumplings, while I took what was ready and got one of the two giant pots finished in time for serving. The final menu was Beef Brisket with Scotch Barbecue Sauce, Chicken and Dumplings, Mexican Beans and Rice, Sausage and Peppers, Jamaican Curried Goat, Mashed Potatoes, Green Beans, Italian Salad, Home-made Granola Bars, and Bottomless Apple Pie.

And then it was time. Two seatings of a couple hundred youth and adults each. Volunteers from other units helped us serve the food, and also cleaned up after each seating. After it was all over, we were wiped out. We had some time, so out came the games. James, who just turned 4 last week, beat us all at Zombie Dice. Saturday evening cracker barrel is basically just leftovers. Everything got brought out. And the hungry wolves came back in and devoured yet more cookies, apple pie, cold pizza, leftover brisket, etc.

There are strange things done in the name of fun
By the crew who cook for Scouts;
To do the job and feed the mob
You must cast aside all doubts.
Demanding food, they’re in no mood
For the usual fare, you see:
At that cold Rendezvous the best you can do
Is required at Camp Maumee.*