Deanne and I were talking over the pressure she feels at her job. She was hired as a professional, but the Obama Labor Dept.'s new rule on overtime (since stayed by a federal court) meant that her non-profit had to shift her to an hourly wage. Same overall pay, but the pressures are different.

She's being pressed to make "production," which in her case means billable hours. But there are other things that have to be done, too, which don't count as billable hours -- certain reports, follow-ups, and so on. She's not supposed to stay late to get them done, because then they'd have to pay her overtime, but there's no other time to do them. She's been working over her lunch break to try to keep up. This is a problem.

I told her that she's getting the worst of both salaried and hourly statuses, and needs to get some things clarified. A salaried person -- a professional -- understands that the job is the totality of what needs to be done, and to carry work home is usual. But if you're hourly, then you get paid for everything they ask you to do. If you're working at McDonald's and they call you in for a store training meeting, you get paid. If you're on the clock, you get paid, and if you're off the clock, you don't work. A business asking you to work off the clock is not merely demanding; they're breaking the law.

So we talked about how factory work is done, and how hourly workers manage to met production goals within the rules set by their employers. There are all kinds of internal adjustments workers make to succeed in this environment, which professionals don't do. Deanne used to do factory work, and she lit up as she remembered how it was done.

Anyway, I'm sure what has happened is that the bosses at her non-profit got the memo from the Labor Dept. and figured they'd just diddle the numbers to comply and then go on about their business same as always. They probably don't understand that they're paying people by the hour to work like salaried people; they haven't made the transition in their heads.

Meanwhile, I'm hoping that the power grab by the outdoing Labor Dept. gets overturned. But that may not mean that all the non-profits (including the local Boy Scout Council) can go back to the status quo ante. People have lost their jobs over this craziness, as non-profits have had to figure out how to stay within their budgets, and those jobs aren't going to be restored. Similarly, those who've had their statuses changed might not have them changed back, so the question of what is work and what expectations are reasonable will still have to be answered.

My daughter posted on Facebook her astonishment at the uproar on Twitter over the accusations re: Russian blackmail of Donald Trump. I replied that it reminded me of the assault on Helm's Deep. Trump is neither so noble as Theoden or Aragorn, nor so brittle as Denethor, but he is, in his way, a defender of what we think of as the West. So these lines from The Two Towers resonate with me.

The assault on the gates was redoubled. Against the Deeping Wall the hosts of Isengard roared like a sea.

They hate us, and they are glad; for our doom seems certain to them. "The king, the king!" they cry. "We will take their king. Death to the Forgoil! Death to the Strawheads! Death to the robbers of the North!" Such names they have for us. Not in half a thousand years have they forgotten their grievance . . .

How shall any tower withstand such numbers and such reckless hate?

I understand those who dislike Trump. I understand the fear of what he might bring. I understand the pain and shock of losing an election you thought you had in the bag. But the dominant impression I have of the left these days is just one tossing, roaring sea of bellowing hate.

They use words and argument, but there is no reason in it. There is only rage. And in that rage they sometimes say things they don't mean. More frightening, they sometimes say things they actually do mean, but are normally too suave to disclose; the mask slips sometimes. Such unreasoning hate. Underneath all the noble words about caring for the disadvantaged, there is such unreasoning contempt for everything and everybody who stands in their way.

I heard from Michael Lawson, current pastor at TVUMC, asking for details on the stained glass window my last confirmation classes did there.

The window is a Nativity Angel. Posing for the window was Megan Paolello. She was 12 or 13 in November, 2003, when we did study photos for a series of windows. Megan was posing for the Nativity window. Two other girls posed for a pair of Resurrection Angels to flank the main church entryway. Those other windows never went beyond the drawing stage because I moved in June, 2006, to EFUMC, where I still am. So Megan is now immortalized in glass. I told her that only I could make her an angel, and there's the proof. 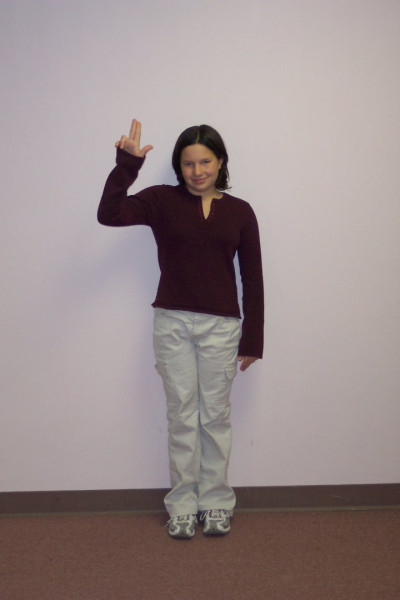 Anyway, my 2004 and 2005 confirmation classes cooperated on this project, dedicating it on October 30, 2005. I was feeling woozy that morning in church, and later that day wound up in the hospital with an unsuspected abscess that almost killed me. Thank God for IV antibiotics. It took me months to recover. 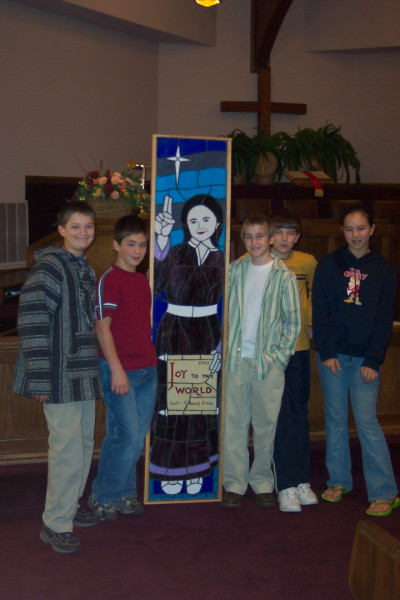 Some of the crafters with their window before dedication in morning worship
L to R: Justin Ahaus, Casey Brice, Josh Hooten, Aaron Bender, Elizabeth Brice

As most of you know, my current youth are working on a set of stained glass windows here at EFUMC. I post pics of them from time to time. Today, 11-year-old Evan and her 8-year-old brother Jack helped college freshman Alex and me solder the joints on the back of the third of a four-window set under construction. 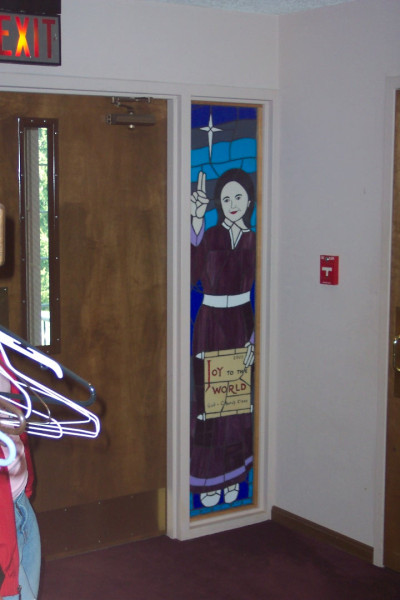