It's been a while since I've posted about our stained glass window progress. I've been fine-grinding and fitting a bunch of pieces the youth had cut but hadn't time to fiddle with. I've also been recruiting some new kids to help with the project. Some were too young to help when we began this two years ago; others are Scouts and their sibs who find themselves at loose ends during meetings.

This is the third of the four windows we're constructing. It has a Creation theme expressed through animals. I'm hoping that it will reach completion over New Year's. Then there's just one more window -- the one with people in it, expressing our relationship with Christ. If all goes well, we'll switch to carpentry about Easter and start constructing the frames these windows will go in.

This project's design was from my 2014 Confirmation Class: Harrison, Mason, and Logan. They're the ones who insisted there had to be a lamb and a cat in this window. I convinced them that the stag would be important for an Indiana window. In the original design, the cat was stalking the bird, but some adults in the church got the vapors over that image (I tried to tell them that the cat would never catch the bird, since neither was ever going to move, but oh well), so we moved the bird down next to the deer and put a little mouse in the corner to go nose-to-nose with the cat. 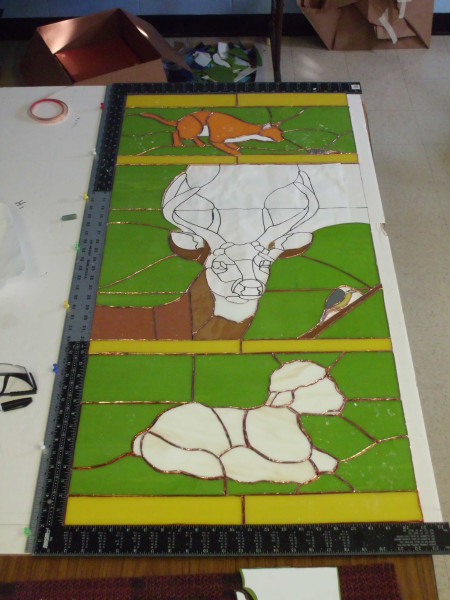 Window progress
The stag is slowly making his appearance
Collapse