So, I put up the tree yesterday to see if Hera would leave it alone overnight. She did, so today I dragged out all the ornaments. Oy, veh, have we got ornaments. We gave away a good third of them fifteen years ago when Anna started her own household, but we've kept on buying more ornaments (for the grandcubs -- yeah, that's my story, and I'm sticking to it). For the last few years, we didn't put up a full-sized tree, since Hera and Lightning wouldn't leave it alone. One forgets just how much Christmas junk there is in one's closets.

I started unpacking ornaments and laying them out. I couldn't find the angel to put on top of the tree, so I sorta went with the idea of a "concept tree." Here's the beginning of a couple with different toppers. Victorian Tree
The top hat adds a bit of distinction to the old tree, don't you think? 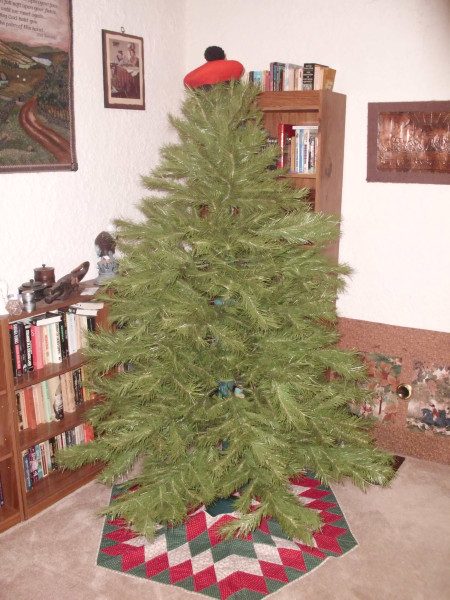 Voyageur Tree
On the other hand, the red of this voyageur's bonnet brightens up the tree considerably.

The angel was in the second box of Christmas stuff I brought down. So, on with the lights we went. Heavy and/or unbreakable ornaments on first, down below. Lighter and more delicate ornaments as we ascend. Last of all, lots of little glass balls from my parents' trees, all over. 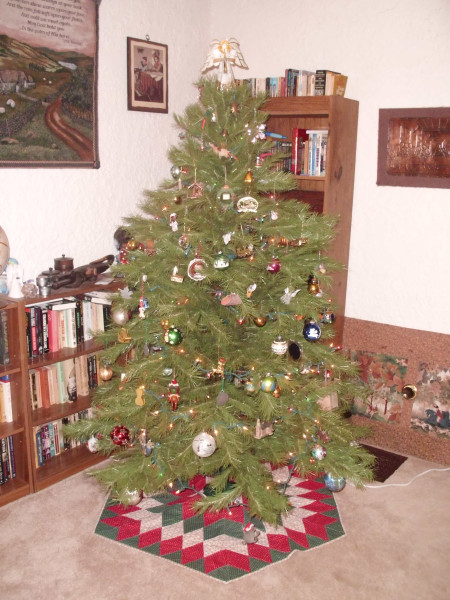 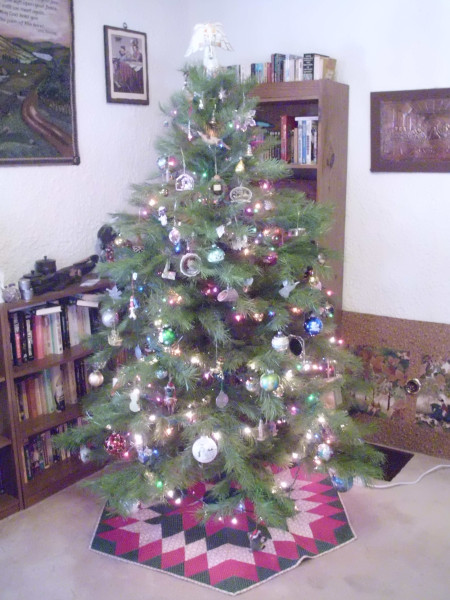 Ooh, shiny
Natural light - no flash - brings out all the gauzy, glittering charm.

My newsletter column for December

We read in the Gospel of Matthew that the wise men came from the East searching for the newborn king of the Jews. They said they had seen his star, and so had come to worship him. Speculations about the Star of Bethlehem abound. Exactly what the wise men saw and how they determined its meaning, within their tradition of astrological interpretation, can’t be completely pinned down now. As a stargazer myself, I understand enough about the motions of the planets and the precession of the equinoxes and all that to make some sense of it, but I wouldn’t go so far as to insist on my theory.

But I know how I feel when I’m out on a cold, clear night, and all the stars of heaven are burning like jewels laid on a cushion of black velvet: I feel moved to pray. They are so beautiful. I worship the Creator of such beauty. And they are the same stars that moved me when I looked up in wonder at them as a boy. I have grown old, but they are still the same. I feel renewed to feel as I felt then, and they give me a glimpse of eternity. I don’t look to the stars for meaning; that is, I don’t think they foretell anything, you can’t predict the future by them. But that doesn’t mean they have nothing to say.

The heavens are telling the glory of God
and the firmament proclaims his handiwork.
Day to day pours forth speech,
and night to night declares knowledge.
There is no speech, nor are there words;
their voice is not heard;
yet their voice goes out through all the earth,
and their words to the end of the world. (Psalm 19:1-4b)

The stars speak of to me of the power of God, of his beauty, of his holiness. They testify to his love for his creation, including me. And when I remember that he who made all things — the stars, and me — also became part of his creation, a helpless baby, in order to redeem it from futility, from sin, and from death — well, then I am moved to worship him and lay myself at his feet for an offering. I find peace when I talk to my Lord under his stars.

At this time of year, I particularly seek to go out and see the stars for the purpose of worship. And if you are disposed to see patterns in the stars, I would recommend you do this, too. The constellation Cygnus (the Swan), who flies across the skies all summer, at the beginning of winter stands on its nose and assumes the form of a gigantic cross of jewels. The bright star Deneb, normally the Swan’s tail, is now the head of the cross. If you go out on a clear night around Christmas Eve, you will see this cross in the northwest, just above the horizon about 9:00 o’clock.

It’s not exactly what the Magi saw, but you too, will be able to say that you have seen God’s testimony in the stars.