Our Hiking Merit Badge group met up at 8:00 a.m. at the church and were soon on the road to the Young's Creek Trailhead south of Paoli, Indiana, about an hour away. We had everybody for this adventure. Today was Matt's last qualifying hike for the MB. After today, Andrew still has one ten-miler and Logan needs two more. Don drove.

It was a chilly morning with a clear sky. Going to be a beautiful day. Don brought an orange vest and Andrew had an orange sweatshirt. Don reminded us that today was Opening Day of the gun season for hunting whitetail deer. Oh, yeah. We met several deer hunters in the course of the day. They were all cordial, but hoping we wouldn't scare the deer away. 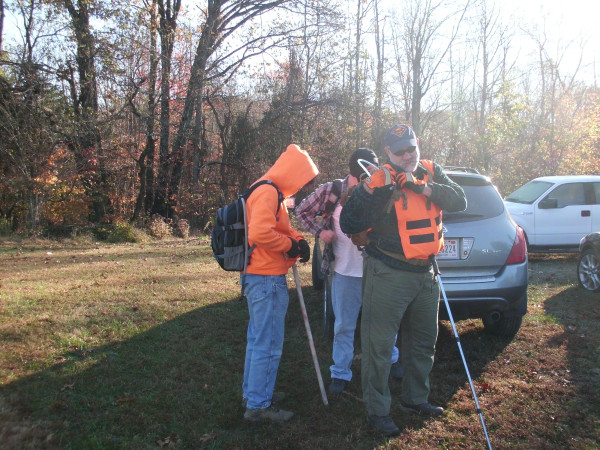 Orange is the new black
Gearing up at the trailhead

By 9:30 a.m., we were off down the trail. The whole of our day was spent on forest trails dedicated to hiking, horseback riding, and mountain biking. That meant that we would have dirt beneath our feet, rather than pavement. The day promised to be kind to our feet. As we started off down the trail, a solitary woodpecker was the only sound. 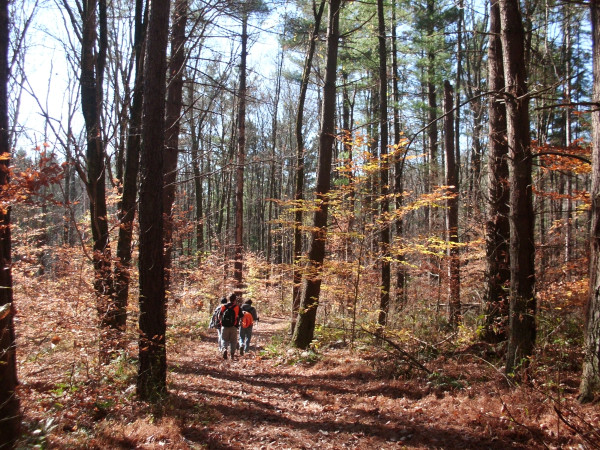 The trail led consistently downhill for the first mile and a half. It was fun to walk, but I was worried about the second half of the day, when we would have to gain back all the elevation we were losing right now.

We came to our first waymeet. This required extensive consultation with both our map and the one posted by the Forest Service beside the trail. I get impatient with Scouts' inability to read a map; after all, we constantly go over this skill. But then, I discovered that confusing the issue was the fact that the Forest Service had posted their map beside the trail upside down, so that it was oriented wrong. This is one of my pet peeves, and it just serves as a reminder that you can't believe every sign you find in the wilderness. It's best that you really know where you are and where you're going. Depend on your own skills. 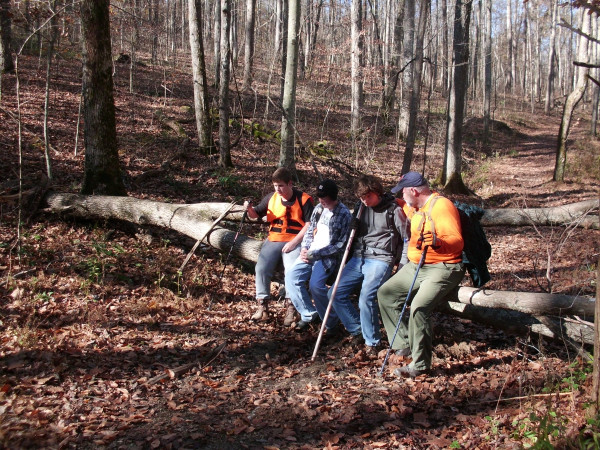 In late fall and early spring, the woods open out, to give you a sense of country. You can see horizons peeping through. In full summer, all you see is a green wall, and you can't "read" the land to see what's going on as easily. When you are a four-season camper and hiker, you notice stuff like this. Summer-only campers miss out on all the beauty and grandeur to be had. Every season has its special attributes. We came to our first road crossing, and I saw that a new trail had been added since the last time I did this hike. Eight years ago, we had to take the road down to a crossroads, then another road up to catch the trail again. Now, we stepped across the road and kept on walking through the woods. There was a trail map posted by the crossing (oriented correctly this time) which helped clarify what my map did not.

I told the guys about that last hike down here. It was in early December, 2008. There was snow on the ground, and a light snowfall during the day. Here's a flashback to that day, featuring one of our Venturers who was then a 13-year-old Scout. Jeffrey's 21 now, and not cute anymore, I'm afraid. Oy veh, it happens to all of us. Flashback to a young Jeffrey on the Young's Creek trail
Geez, man, what happened to you?

We walked through drifts of dried leaves, which often made it too noisy to hear each other talk. We stopped for lunch at 12:30 or so. I said, "I'm sitting in a patch of sunshine in the beautiful outdoors, eating BACON. It doesn't get any better than this."

The trail went way down to a dry creek bottom, then did some serious UP as it climbed a ridge. By the time we got back to the same road to be crossed, we were pretty blown. I said to the Scouts, "I assure you, I feel every one of my ninety-five years." One of them said, "You're 95?" To which I replied, "You're only as old as you feel." Which can be taken in more than one way, if you think about it. Still, I noticed that the road itself was much higher here than where we had first crossed it. This encouraged me to think that maybe the rest of the elevation we had to gain back wouldn't be too bad.

We tramped on. I kept working over some anomalies in the various trail maps we encountered. According to my map, the Young's Creek Trail should be 10.5 miles. But adding up all the segments they show on the trailsigns would make it about 11.5 miles. We finally agreed to call it eleven miles for the record.

We had another road to cross. A short, severe rise brought us up to the last crossing. We were looking pretty ragged and beginning to leave people behind. I rode Andrew, the hike leader, a good bit on this. After every break, he and Logan would jackrabbit off, and the line of hikers would get all strung out. He said that was the way he walked down the hall at school, or anywhere else. I said, not for the first time, and not just to Andrew, that leadership is about getting the best peformance out of your crew, not just about doing what you feel comfortable doing. 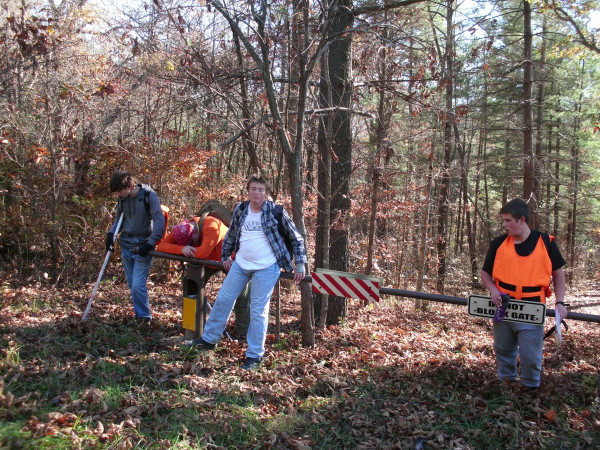 Andrew did a better job on the last leg of the hike. Some of us were pretty spent, and all of us were ready to top the last rise and see the trailhead again. I suspected that it lay atop the ridge right in front of us, but the trail twisted round and the ridge we were looking for wasn't yet in store. We took a break, collected ourselves, and then -- of course -- there it was, not a hundred yards ahead. As we came in, we noticed that the hunters had been busy. 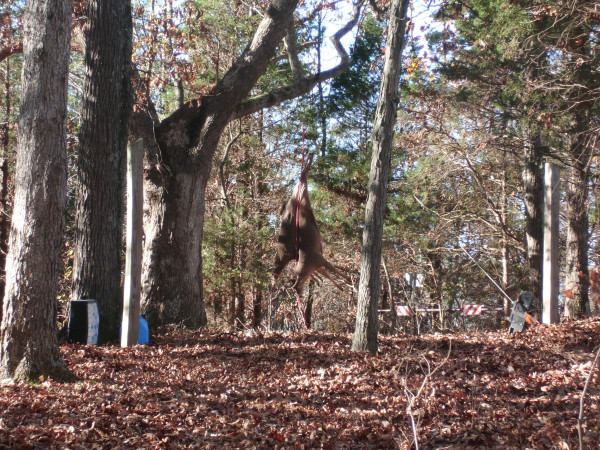 Today's bag
It was Opening Day of gun season, after all

I dropped to the ground and did my traditional five pushups with pack on, and gave my Venturing call: "Rougher! Tougher! Buffer!" Except I didn't feel very rough, tough, or buff. Still, we all made it, and in good order. The time was 3:35, six hours on the trail to cover eleven miles.

We dropped off Matt at Judah on the way home. I finally limped in my door and scrounged up a ham sandwich for supper. It was a beautiful day spent in good company.

And now, my estimated lifetime hiking total is 1,681 miles.
Collapse