We hadn't pulled off a hike since mid-July. Don and I were pretty out of shape. Logan couldn't make it. Matt and Andrew were as ready as ever, which is to say, strong but not enthusiastic. (I referred to them on the trail as Sullen and Grumpy, since they don't talk much. But they can sure keep going. Fourteen-year-olds are like oxen or mules, they'll walk till they drop; just don't ask them for conversation.)

Anyway, we met at the church at 8:30 this morning, and Deanne drove the four of us out to the boonies, dropping us off on Rattlesnake Road somewhere south of Cuba in the wilds of Owen County. There began a gravel road that led to Rattlesnake Campground, three miles away. It was a dim, shady morning, with the promise of clear skies and cool weather. A bit of hoarfrost still lingered on the fence rails. By 9:15, we were moving on down the road. We were wearing flannel shirts or jackets and gloves. Only patches of sunshine filtered down to the road through the trees. The cool weather, however, meant that we could move briskly and not need as frequent breaks as we often take. We expected to make some good time on the trail today.

Surber Road, which leads to Rattlesnake Campground, is a public road, but it might as well be a forest road. It crosses its creeklet about three times, the first two of which can give you pause if you have to cross them when the water is up. We didn't have much trouble. First crossing
Which way is the best way? Second crossing
This way you don't get your feet wet

By 10:20, we had arrived at Rattlesnake Camp, a full three miles from our start. That's a rate of advance of almost 3 mph. We paused for a break and a snack, and shed our outer wear. We started off again by 10:45. Our path took us down a little down forest road, which eventually became a public (but still gravel) road. There was some up and down, fortunately more up than down. Matt was doing an excellent job of not walking off and leaving the old geezers behind. He set a brisk pace, but made sure to keep the group together. By 11:30, we hit Hale Hill Road. Just a few yards from the waymeet, Fish Creek Road began. Our route now headed south to the Forest HQ and the camp behind it. In just a few minutes, we came to the horse camp between Rattlesnake and Fish Creek Campgrounds. There, we stopped for lunch. We had done five miles or so in two and a half hours. Refueled and ready to go
Off on the road again

We left the horse camp at 12:20. Matt thought we could power through to the end without taking any more breaks. He set a pace Don and I couldn't keep up. Eventually, Don had to take off his ankle brace, which was rubbing him the wrong way. I was on the verge of cramps and muscle pulls in my legs. We had to remind Matt that four miles was still four miles, and if you burn out your crew, it'll take a lot longer to get there. About two miles from our goal, I called Deanne to warn her that we were ahead of schedule.

Fish Creek Road passed houses and farms. A friendly horse came out to greet us, and I gave her the apple core from my lunch. She pranced and kicked around her pasture after that. We stopped for a break a little later on a soft patch beside the road, and some local guys stopped to remind us, helpfully, that they were going to be sighting in some guns on the land we were stopped on. (Translation: why are you here?) We replied that we had just stepped off the road for a break. 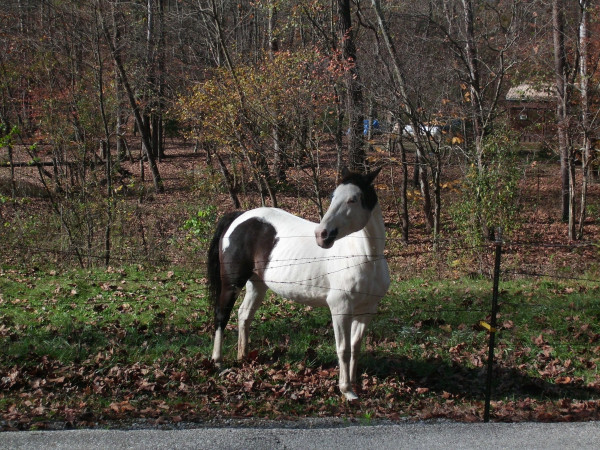 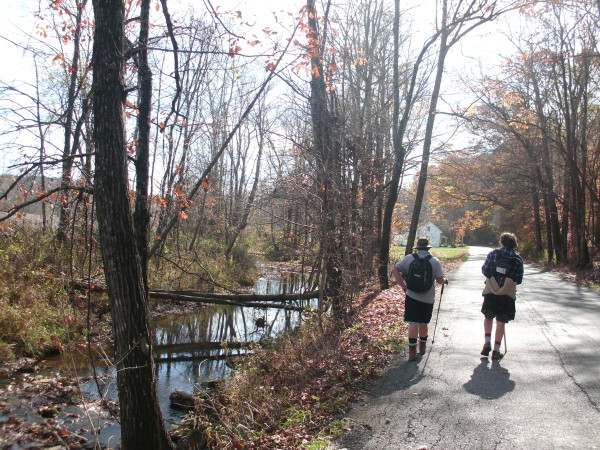 Follow the creek
The valley broadens out here a bit

Suddenly, we saw the State Forest HQ, and we turned off the road that climbs to Fish Creek Campground. This last hill was the one genuine butt-buster of the day. We dragged ourselves to the top and plunked ourselves down at the shelter by the fishing pond. It was 2:10. We had done all ten miles in only 4 hours 55 minutes. We had only to wait a few minutes at the shelter before Deanne appeared to whisk us back to E-ville. 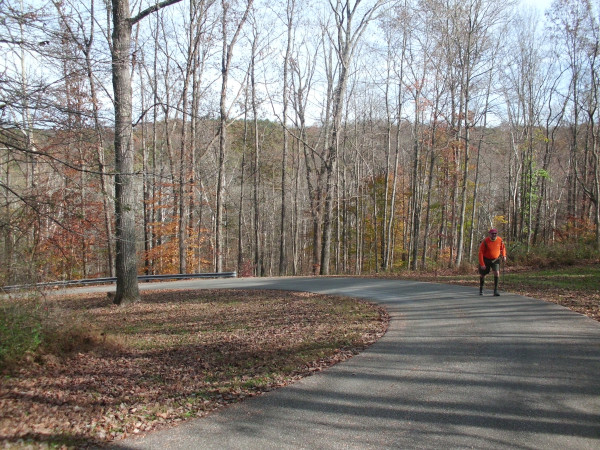 Almost there
That last hill is a doozy

All in all, it was a great day for hiking. The cool weather helped us set a really good pace. The roads were easy, and mostly downhill. I was probably hurting more than I usually am for this one, so I was glad that it was as easy as it was.