A friend's little girl asked her if God ever laughs. This generated quite a thread in the social media post it appeared in. I thought I would follow up that thread with this one.

Years and years ago, I was pondering the nature of church music. Our hymn tunes come from all different sources, secular as well as sacred. But what I was wondering was, is there anything intrinsically more appropriate -- or less appropriate -- for use in church; that is, in the music itself. I mean, we all remember Bart Simpson's practical joke in giving the Springfield congregation a hymn to sing called "In the Garden of Eden" by I. Ron Butterfly. "Wait a minute," said the slow-witted pastor after a verse or so. "That sounds like Rock and/or Roll."

Well, just to test the bounds of appropriate music, I decided to go looking for the most inappropriate or silliest folk tune I could find, just to see if I could write a hymn to that tune which would make the tune serve the worship of God. I settled on the rollicking fox hunting tune, "John Peel." Nothing could be weirder than that, I thought, except of course, for "Rock and/or Roll."

The result is a hymn I call "The Laughter of God." I've had congregations sing it a couple of times, usually around Easter. They love it. So, as far as I'm concerned, there is no music -- qua music -- which is off limits for the church. It's just a matter of finding the right text and the right occasion. Here is the hymn. 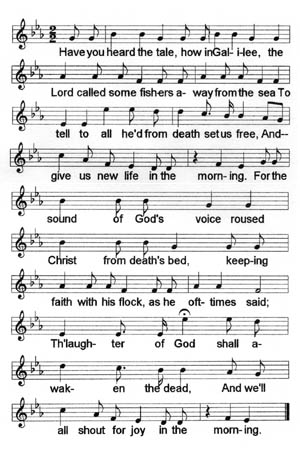 2. To the grieving folk bound with chains of gloom
he spoke of his kingdom of joy and of room
that he'd make for those who with tears by the tomb
had denied there could be a new morning. REFRAIN.

3. Then remember how in the garden there
he trembled and shook as he knelt in prayer,
but he still found faith in the dark night to dare
that with God he would rise in the morning. REFRAIN.

4. So then let us sing and in him delight
for Christ lives again and has set us aright
with God above and we'll pass through the night
when he calls us to joy in the morning. REFRAIN.