In last Sunday's sermon, which I posted on this blog, I made the following statement which, I think, raised some eyebrows.

The thing I want you to notice is that the Corinthian church is made up of Jews of various sorts - Antiochene, Alexandrian, and Aramaic – each with a slightly different perspective on the gospel, as well as Gentiles of various sorts - Romans, Greeks, Phrygians, whatnot.

How can I know that, especially about the various sorts of Jews?

As regards the Gentiles, we know there were Romans and Greeks mingling there from history; besides, there are Latin and Greek names recorded among the Corinthian believers in both Acts 18 and 1 & 2 Corinthians. The Phrygians I tossed in as a placeholder (they lived across the Aegean in SE Turkey, just beyond the Ionian Greeks), to stand for all the other Hellenized ethnicities one would have encountered in a mercantile transportation hub like Corinth.

As for the Jews, I wasn't suggesting that the Jews were actually from Antioch or Alexandria, though some might have been. I'm assuming that the Jews of Corinth were typical of the Diaspora. Some might have come from other places, but many probably were native to Achaia; some we know came from Rome when Claudius expelled the Jews from that city (Prisca and Aquila, for instance -- though Aquila was originally from Pontus, on the Black Sea coast of Turkey).

That said, Apollos was popular because of his skill in interpreting the Scriptures according to the typological exegesis one would associate with the Jewish scholars of Alexandria. He was a smooth and powerful talker, and would have seemed extremely sophisticated. Paul was not known for his rhetorical skills or public presentation. And, while he could do what the Alexandrians did -- in spades -- one gets the impression he was more direct, and far more interested in making connections with the Gentile way of thinking. Natural theology was something he probably referred to far more than Apollos did. Paul cut his teeth in Church leadership in Antioch, which was very open to working with the Gentiles, and where the disciples were first called "Christians."

Now, the entire history of theological development in the first five centuries or so of the Church is dominated by the attempt to reconcile the Alexandrian and Antiochene modes of theological expression. Later on, references to the tensions between the Patriarchates of Alexandria and Antioch stand in for the whole range of issues that roiled the early Church. Whatever the individual merits or characteristics of Paul and Apollos, I'm suggesting that you're seeing the germ of that competition here in 1st Century Corinth. Some people liked their theology served up with an Alexandrian sauce, while others found Antiochene flavors more to their taste. And these differing approaches could easily be misunderstood by the other camp, and lead to banners being waved and lines being drawn in the sand -- to the creation of factions, which is what Paul is talking about here.

As for Cephas, this refers to the Apostle Peter back in Jerusalem. Some people in Corinth, faced with those drawing distinctions that were leading to faction, attempted to trump the board by appealing to Peter's apostolic leadership. By using the Aramaic form of his name (petros in Greek and cephas in Aramaic both mean "rock" -- and Cephas is what Jesus undoubtedly actually called him when he gave him the nickname) they are implying that their group is more authentic in its expression than all these slick preachers arguing in Greek.

Of course, Paul mentions that some of the Corinthians were saying, "I belong to Christ," too. Well, whenever this sort of thing gets going, and labels start getting applied to various groups, there's always somebody who tries to condescend to everybody else. You know the sort. They say, "I don't believe in labels, I just belong to Christ," and then they proceed to use "Christ" as a mere label for themselves. If you want a more recent example, look at the Restorationist Movement of the 19th Century.

So, why didn't I say all this? Well, you can't say everything in a sermon. There's not enough time. Back when I was teaching beginning education students how to plan lessons, I would start by asking how long their class periods were. They were surprised at that, but then I said, "the size of your truck determines how many vegetables you can take to market" -- at least, in a single trip. Sermons are the same way. So, for the sake of time, you have to cut things down to fit the time you've allowed yourself.

You also have to cut things down now and then in order to preserve clarity. If you chase too many rabbits, even though you kept to your time, your hearers won't get the main point you're driving at. So you have to sacrifice subsidiary points in order to emphasize the main point. Now, the sermon covered a vast amount of territory -- four whole chapters. I could have preached several sermons from 1 Corinthians 1-4; however, to do so would mean it would be less likely that people would get the idea that throughout those four chapters, Paul is banging on about factions, and that was what I was trying to get at. Plus, I wanted to get this sermon series done before Advent.

The sermonic form is not capable of carrying footnotes, so sometimes things don't get said that you'd have liked to say, but could only allude to in passing. But please note this: I try never to say anything in the heat of the moment that I am not willing to back up in cold prose and to show my sources for. The sermon is, ideally, only the tip of a very large iceberg. It's the part that shows above the surface; down below is an enormous amount of study and reflection and prayer.

Ellettsville has a new coffee shop with baked goods and sandwiches downtown. They roast their own coffee. They also cold-brew some. I got a shot of cold-brewed Ethiopian coffee so intense it tasted like unsweetened chocolate.

So, clergy colleagues, we have a place to schmooze when you are passing through E-ville. C'mon over! 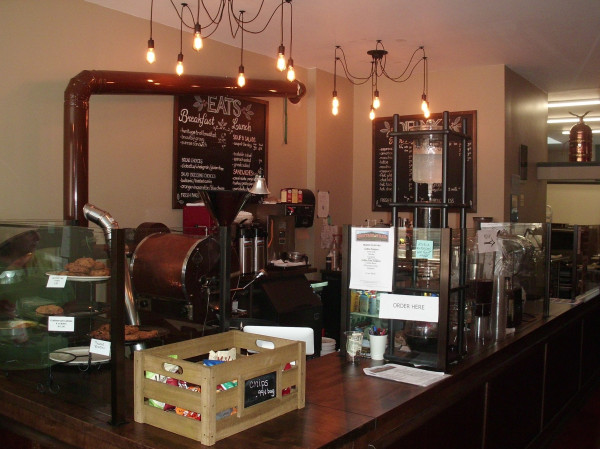