I had to go to Indianapolis this morning to see someone in the hospital. After I got back to E-ville, I had to go to the other side of Bloomington to run an errand. When I got back from that, I knew I would have to take down the two tents I had set up in my back yard, drying and airing out from this weekend's camping trip.

When I pulled into the parsonage driveway, the crew from the church's lawn service was there, mowing both church and parsonage yards. Great. That meant that there were grass clippings all over the tents, which would have to be swept off. It also meant that when I took the tents down and put them away, there would be two unmown patches in the yard where they had stood.

"I thought you guys came on Tuesday," I said to one of the guys. He said he'd always come on Mondays. I don't know what's right; I do know that the date of service is a constant bone of contention between the Trustees and the lawn service. Okay, let that go, I thought. Just get the tents put away. As I was rolling them up, I asked one of the crew members about the mass of weeds on the edge of the yard next to one of our church lots that I had asked to be mown flat. We had been to great trouble to get the weed trees out of that patch of ground and had repeatedly asked the lawn service to keep the area mown flat. The reply from the supervisor was that he had checked with the boss, and that was considered "landscaping," not "mowing." It would be a separate appointment -- and another charge - to take care of it.

To look around our little yard is to see masses of weeds that are taking over the edges of things. The lawn service mows right up to the weeds and stops -- landscaping, not mowing! -- but that means that every time they mow, they mow a little less, as the weeds advance along the edges of house and garage, the verge of sidewalks, along the fence. I don't remember them being so delicate before; we had to put a little wire fence up around the patch of peonies and sunflowers in the side yard, lest they mow them down. Anyway, after they left, I got to work to clean up what they consider to be not their job.

I had no power tools; my lawnmower is kaput, and my electric weed eater isn't much better. But I had a full-sized, rusty ol' scythe, a machete, pruning saw, limb loppers, rake and broom! And with those I went to work. I first cleaned out an old flower bed the Girl Scouts dug the mess out of (after which we asked it be kept mown flat): there was a foot and a half to two feet of actual yard under the advancing weeds that was not being mown. I cleaned out the masses of morning glory vines between the sidewalk and the back of the garage. I hacked into the mass of stuff I asked the lawn service to keep mown. I cleaned out the verge of the alley, where a little patch of rose bush had become a mass of weeds (including a volunteer box elder sapling) because nobody would keep it mown. I cleaned out the weeds between the fence and the corner parking lot, where the vines were beginning to encircle the concrete parking bumpers. And when I was all done, I gathered up the yard waste and put it in the back of my little pickup truck, thusly: 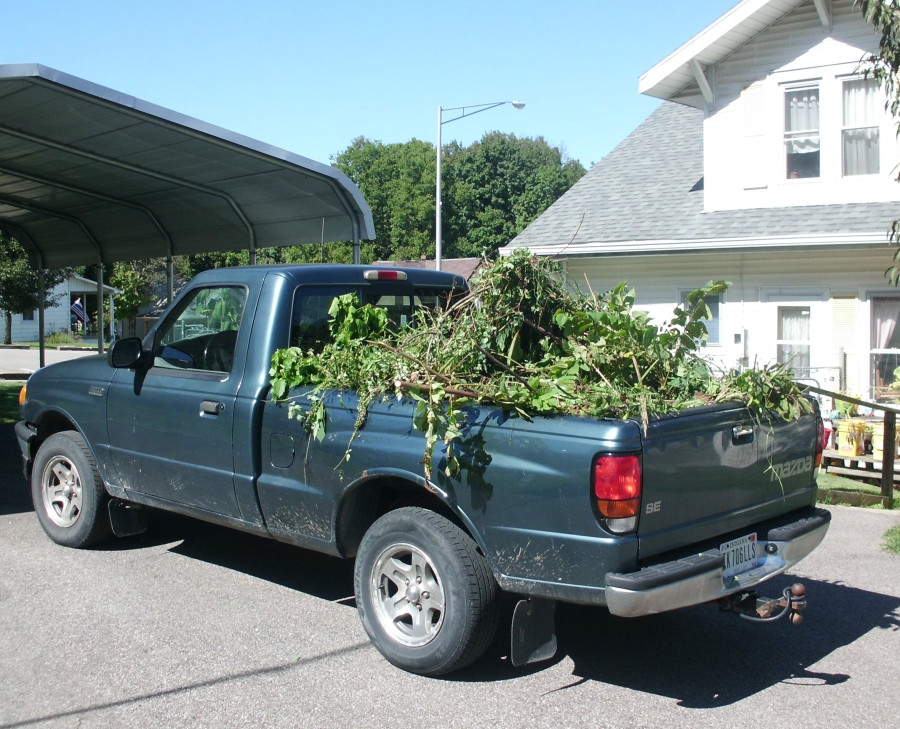 Yard Waste
Left over AFTER the mowers finished

Now, be it noted, I leave actual decisions about lawn care to the Trustees. I give my advice when asked for or I feel strongly about something, but lawn care's not in my Top Ten concerns about the church. And the Trustees have got a tough job, and I don't want to add to their grief by complaining. I also know and like the owner of our lawn service, and I wouldn't want to abuse my pastoral office by blackguarding a community-owned business by name in a blogpost. Nevertheless, neighbors and friends will all know whom I'm talking about, so there's no need to drop names, anyway.

My $0.02 worth is, if I were asked to give a reference for this lawn service, I would, in old country fashion, have to say that they were "as useless as [mammary glands] on a [male pig]."
Collapse