My buddy Zach came out today to help me start laying block in the holler. He arrived about mid-morning. We spent an hour or so scraping and scouring, so that the concrete footer was basically clean. Then we tried to figure out how to mix mortar. The mortar recipe I got from my how-to-do-it book read like a pioneer grandma's pie crust recipe. But we eventually got an acceptable mix.

Getting the first block laid is a finicky process. Laying the first block you've ever laid is a harrowing thing. Zach's background is in IT and Byzantine History. I'm an English major who became an ordained minister. We're not exactly tool-smart, and neither of us has ever done any masonry. So it was slow work.

By the time we'd got three blocks laid as square, level, and plumb as we could get them, the sun was beating on our heads down below. I felt light-headed. Zach insisted I rest. I was sitting on my truck tailgate drinking water, when I decided (I guess) to step around the truck and do something. Instead, I blacked out momentarily. I came to in the bushes by the side of the road where I had pitched headlong. Zach was calling after me. He helped me up, and we rested for an hour in the cabin, sipping water. I had a little lunch.

Eventually, we went out and laid a fourth block, just to use up our mortar. I've learned so much today. I'll be much better prepared the next time I have to mix mortar and lay block. But I'll never be better looked-after than I was today when the heat got to me. Bless you, Zach.

After we cleaned tools, we spent some time just talking in the cabin. Zach left at 5:00, I cleaned up the cabin and was on my way by 5:40-ish. Reached home just after 8:00. Looking forward, I figure I can lay block right up until we get some frost. Zach may be available to help some more, but if I'm by myself you can bet I'll get an early start and quit before the sun gets high, at least for a while. 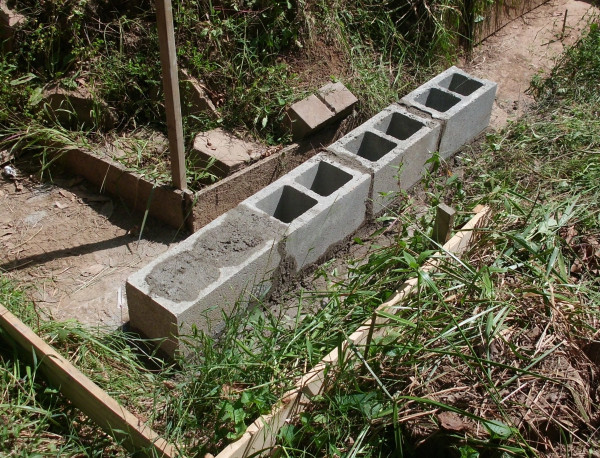 It's a start.
It's bootiful.
Collapse