Today was our latest ten-mile hike for Troop 119's Hiking Merit Badge crew. Andrew could not be with us today, since he is attending NYLT at Maumee Scout Reservation this week. So we just had Matt and Logan. Matt took the role of Hike Leader, and Logan carried the map. Don drove.

We parked at the Cataract Baptist Church and looked over our map route. Then we set off through the little town of Cataract, heading for the State Recreation Area just out of town to the north. It was just about 9:18 a.m. The morning was cool, the skies were blue, all around was an intense green. Summer was in full array.

Matt set a fairly stiff pace as we entered the SRA and headed down the road to the Lower Falls. This is typical for teenage boys. They have lots of energy, so they barge off, as if they are going to eat the elephant in one sitting. I gave him his head for a mile or so. Then, I noticed that Logan had merely slipped his boots on without retying them. His left foot was slipping in and out of his boot as if it were a flip-flop. Not good. I called his attention to it, and he asked for a break after a while to tie it right. I spoke to Matt, and thereafter we had fewer problems with him overworking his crew by the pace he set. 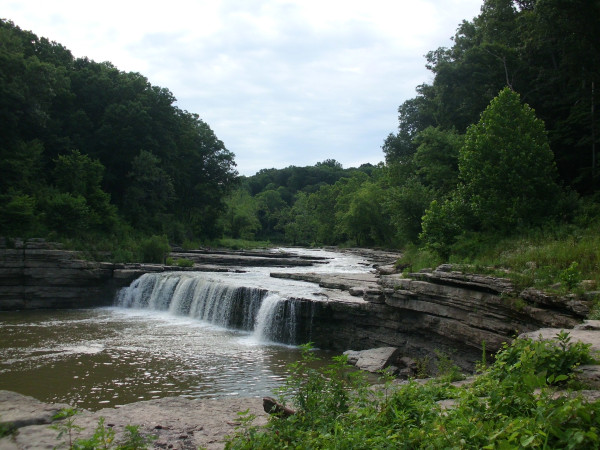