Our Happy Crew went to the Cincinnati Zoo this weekend. As busy as everybody is this summer, we almost didn't get this one pulled off. In the end, only Harry and Zach made the trip; meanwhile, in order to find a second adult, I had to ask Anna -- which meant that we had two extra riders, a wee bit young to join Venturing. That said, Daniel and James are no strangers to doing things with the big kids, while Harry and Zach are cool with sharing their event with the grandcubs. It all worked out fine.

We drove over to Wilderstead Friday evening to stay in my cabin there. Harry had never been there before and was interested in everything, so I gave them the two-dollar tour. This meant crossing over the Pishon where I could show Daniel and James the cairn over Mordred's grave. That's their big ol' black kitty who died last year. James, especially, has struggled to understand what happened to Mordred. Now he knows that after he died peacefully at home, Grandbear took him out to the woods and laid him gently in a grave next to our other departed animals.

Getting across the creek and back dryshod was an adventure, since the recent rains meant the creek was in spate. Most of us used the log bridge, not without some qualms. We sat outside in the gathering dusk and the little boys played with sparklers. Then we went inside and got out some serious card-playing snacks. We played Up and Down the River and Hearts by lantern light. Daniel fell asleep on the loveseat; James went to bed upstairs. The four big people played on until half past twelve.

The next morning we ate breakfast and packed up for a trip to the zoo. The Cincinnati Zoo continues to grow and develop. We spent five hot, humid hours exploring the zoo, and still didn't see it all. In addition to the live animals in their habitats before us, Zach and Harry kept their phones handy to catch Pokemon. The little boys wanted to ride the carousel. Most of the animals were resting in what shade was available. Round and round we go
James, Anna, Daniel on carousel 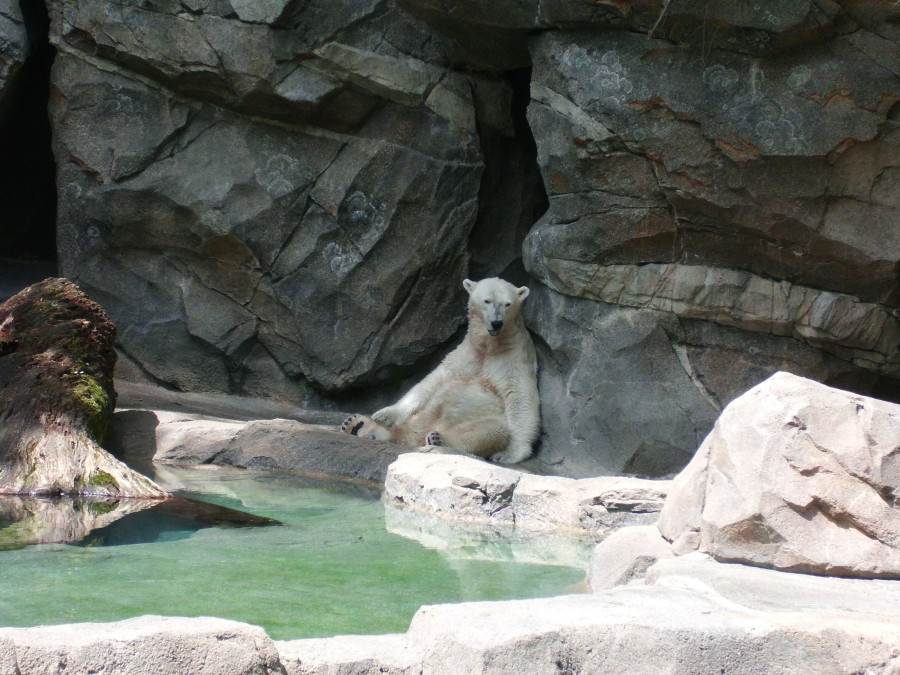 Chillaxin
Polar bear trying to summon up some ambition, and failing

After leaving the zoo, we drove up to Jungle Jim's to explore foodie heaven. Zach had never been there before, and was thoroughly boggled. We ate dinner at the IHOP just off I-275. And then we pulled for home, arriving back at EFUMC about 7:45.
Collapse