Our Hiking Merit Badge group made its second ten-miler today, an easy jaunt from E-ville to the outskirts of Whitehall and back. Andrew was our Hike Leader, and Matthew was our Mapigator. In addition to Don and me, 21-year-old T.J. -- who loved Hiking MB as a Scout and went on to do Philmont and hike mountains in the UK with our Venturing Crew -- joined us as a third adult. Logan, alas, was kidnaped by his family and forced to go to Holiday World today. Oh, the humanity.

We gathered in the church parking lot and started off about 8:45 a.m. The weather was gorgeous: blue skies, cool breezes, and an expected high of 71 degrees Fahrenheit. We stumped up past the high school and the football players at practice. By the time we reached the Intermediate School, we were ready to call a break.

This piece of public art affected me very negatively when it was first installed. I could only sum up my thoughts on it in two words: Ug Lee. But I have to admit it's grown on me. As faux as it is, it nevertheless always communicates "tree" when you see it; whereas, trees in full leaf often merge into a mere mass of green. So, perverse as it might seem, somehow I get more of a sense of what a tree with children under it means from this hunk of steel than from actual trees. It worries me, but it is so. With renewed energy, we hiked south down Louden Road. As we were approaching Ratliff Road a mile further on our way, we met a jogger heading north. I thought, "why would anyone do that for fun?" No doubt, she thought the same of us. We take a short break every fifteen or twenty minutes when we're hiking. Drink some water, catch our breath. Every third break or so, we take a long break. We took our first long break at 10:15. We had been taking the hills in our stride, too. The boys were dreading hills today, but I just told them that in southern Indiana, if you see a straight road on a map, then that means you're going to have hills. At least we had plenty of shade on the lower end of Louden Road. At the end of Louden Road, we turned west along Howard Road. Just before reaching the county line, we met Starnes Road coming in from the north. At the waymeet, we encountered Alane, our Troop Advancement Chair, who was heading into town. I said, we were just coming her way, intending to crash at their farm for lunch. She said, go ahead, Harrison's there. Harrison is another of our Scouts, who had Cross Country practice today.

A mile up Starnes we reached their farm and took lunch. Harrison came out to say hello. His ancient hound, Gilbert, also came out to be friendly. Gilby got some of my aged cheddar at the end of lunch for being such a good dog. 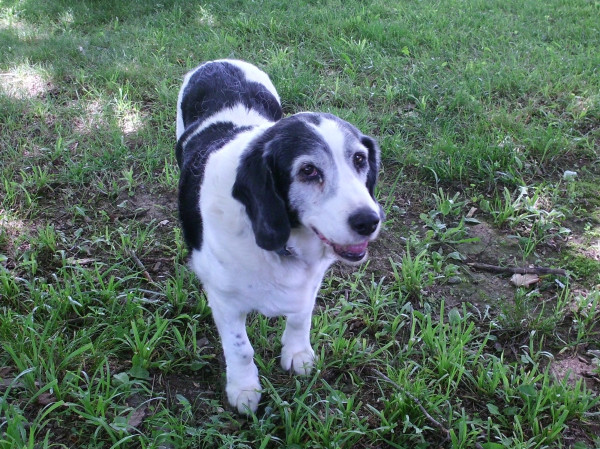 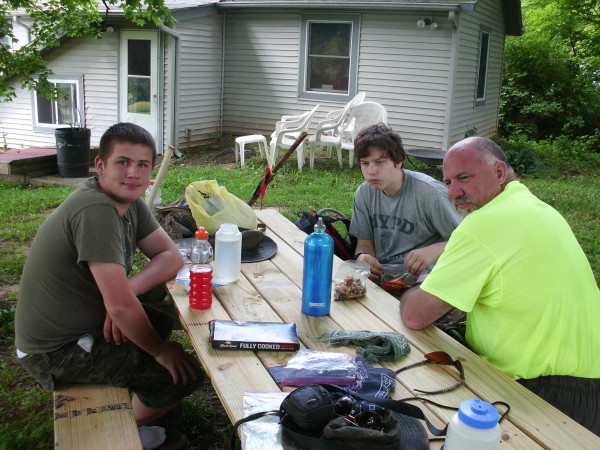 We were back on the road just after noon. Making good time. I started singing, as I often do on hikes. For some reason, I was singing old German songs today. I launched into Die Lorelei, a ballad of a water-maiden who lures sailors to their deaths. Don, who speaks German, was surprised. He knew the poem, but he'd never heard it as a song.

As we stopped for the next break, T.J. asked Andrew how it was possible that he kept his M&Ms from melting on the hike. Andrew replied, "Because I'm a cool guy." Buh-dump-KSSH!

We turned on Ratliff and hiked over to Louden Road again, and turned back toward town. As we approached Louden Road, a man in a car driving by asked if we were Scouts. He approved. "Gotta love those Scouts," he said, or words to that effect. We agreed. We walked on.

Approaching town, I saw Janet's pond in the distance. Janet was a parishioner who died a few years ago. She let people she liked fish her pond. And then we were back at Methodist Cemetery, right across from the faux tree. The first Methodist church in town was built here, though the congregation is in fact older than that. 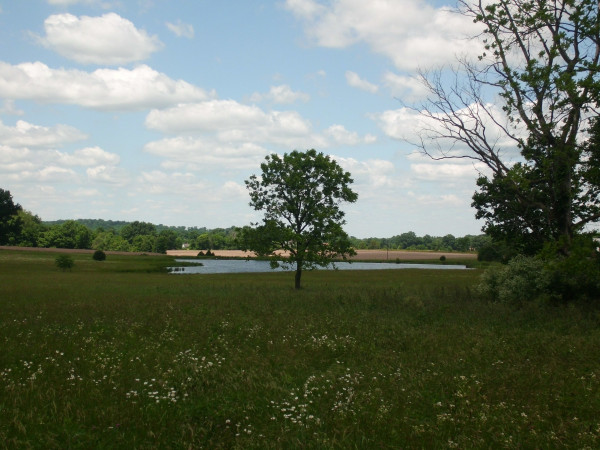 Passing the high school on the other side, we came into town by way of the Cross Country course. This brought us back to the church from behind, a new approach to our Scouts. We turned down an alley and there was the church, bell tower and all. We descended to the parking lot where I dropped and did five pushups, as usual, then called out, "Rougher! Tougher! Buffer!"

It was just 1:45. We had done ten miles in almost exactly five hours. Next up: the dreaded twenty-miler! 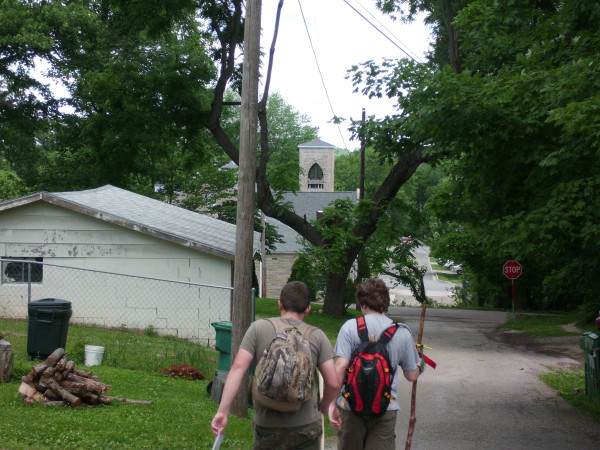 This brings my estimated lifetime hiking mileage to 1,630 miles.
Collapse