Troop 119's latest iteration of Hiking Merit Badge started off with a nice ten-miler from Gosport to Ellettsville today. I was the only veteran; even our second adult, Don, was a newbie to serious hiking. With that in mind, I had planned an easy affair, just a walk from one town to the next along some pretty back roads. Piece of cake.

We got ourselves up to Gosport and were dropped off at the south edge of town. As we got out and began to stretch, I explained the various leadership roles of a hiking crew. The leader sets the pace and calls the breaks. The mapigator carries the map and is supposed to know where we are. The advisor walks in the back ("sweeps the trail") to make sure no one falls behind. Matthew volunteered to be our first hike leader. Logan volunteered to be our first mapigator. Completing today's crew were Andrew and his dad, Don. I also explained how to start and stop the crew.

About 9:13 or so, everything was in order, so we began to walk down the road toward the bridge over White River. We crossed by the new bridge, but as we turned up the road along White River, we passed the entrance to the restored old iron bridge that I remember from my youth: The Ferry Bridge. We paused to look it over. The day was fair and warm. There were cool breezes. There was a 40% chance of thunderstorms, though, so I was hoping to get home and dry before the weather blew in. The road rose above the White River valley. About 10:00, the road turned south, away from the river. The sun was shining, and the day was broadening out. Blue skies were in evidence. 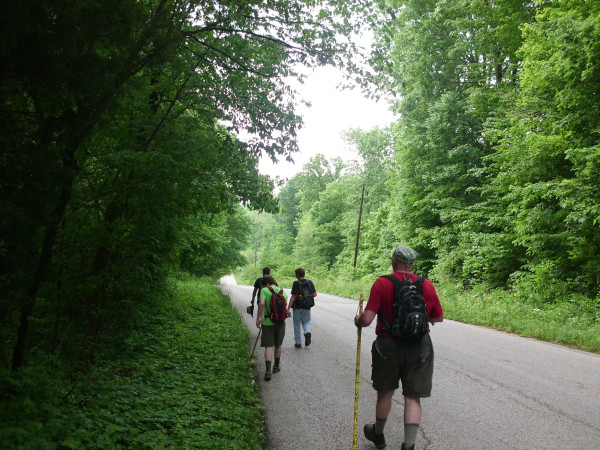 The Road Goes Ever On
A beautiful day for a hike

I was pretty stiff from lack of exercise and winter weight, but soon got moving pretty well. We stumped on down the road, passing farmers' fields and houses with shady lawns. About 11:20, we passed through Stinesville, a little town remembered for its connections with the limestone industry and with railroading. Once out of town, we turned south on Red Hill Road. We stopped for lunch about 11:45 on Red Hill Road at about the halfway point. Not that I told them we were halfway. Scouts always want to know how far they've come or how far they still have to go, and they set themselves up for disappointment by imagining they've gone farther than they have. So, in imitation of the Rangers at Philmont, I simply tell them, they've just got "two Ranger miles" to go. No matter where we are or how far we've come, there are still just two Ranger miles to go. When they ask how much a Ranger mile is, I reply, "halfway." 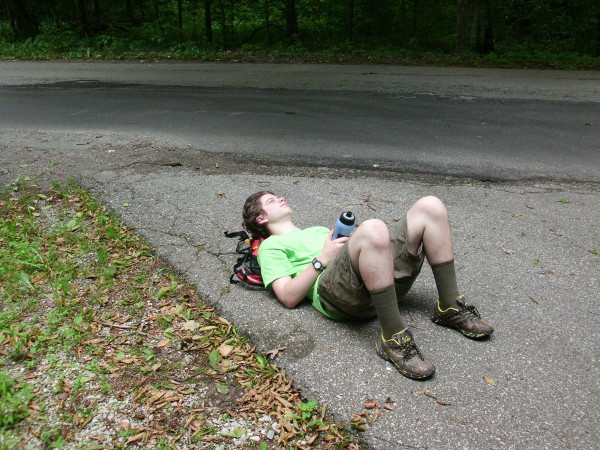 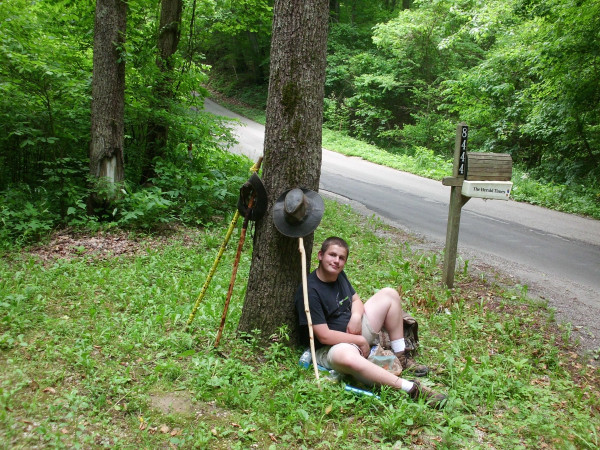 Since Matthew and Logan had leadership roles already, I asked Andrew to say grace for lunch. I'm glad to say that we have good Scouts who know how to lead prayer and show no shyness in doing so. 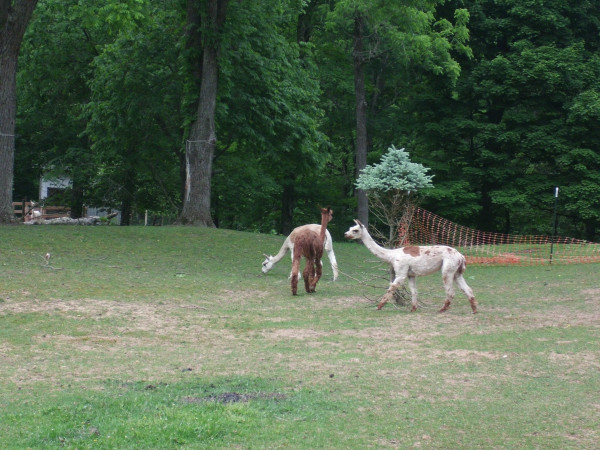 Long-necked goats
I don't know why, but llamas are popular in Indiana

An hour later, we crossed Jack's Defeat Creek. This was, by my calculation, about the six mile mark, and the Scouts were making some serious grumbles. This is usual. If you're used to doing five mile hikes, a ten-miler will seem too long about mile 6 or 7 -- until you dial in the new experience. After a couple of ten-milers, the frets dwindle away. Around mile 7, we came to a steep hill, and we practiced caterpillaring. This is a technique for ascending a steep slope by a group. They did fine at it. We could have stumbled on up the hill; I just saw it as a teachable moment.

We were near the outsksirts of Ellettsville when one of our Assistant Scoutmasters, John, appeared with his truck. He brought us some water, just as some of our hikers were reaching the bottom of their water bottles. One or two Scouts seemed to think he was there to drive us the rest of the way in, but No. Still a half mile or so to go -- now on sidewalks. 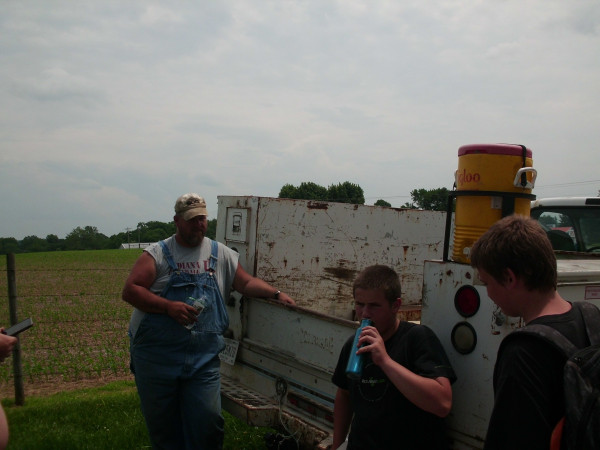 You're a better man than I am, Gunga Din
John does his Good Turn for the day

We marched into the church parking lot about 2:18. Call it 5 hours, 5 minutes to complete ten miles. No rain. I dropped to the pavement and did my traditional five pushups and our Crew yell ("Crew 119: Rougher! Tougher! Buffer!"). Andrew asked me why I did that. I said, to show I still had more in me. Kudos to everyone. The Scouts were a fine bunch. Matthew was a good leader, and Logan was a good mapigator. Don did fine, too. I promise, guys, the next one won't hurt so much.

This hike brings my lifetime hiking total to an estimated 1,620 miles.
Collapse