Anna took Daniel and James to our Cub Pack meeting this evening. They had a great time playing with the other boys, especially Daniel. I cooked hot dogs. One dad asked if I always cooked for Scout meetings (he was at the Winter Rendezvous). No, I replied, but Jason was a bit distracted, and I was hungry, so I got cooking.

The Pack meeting was cut a bit short by the weather. The cookout was great, but not much fun and games followed the food. A big ol' storm came pounding in, and people left fairly early. The last holdouts, who were waiting on the rain to slack off, left when they got word of a tornado on the ground near Worthington.

A night to remember, as they say. 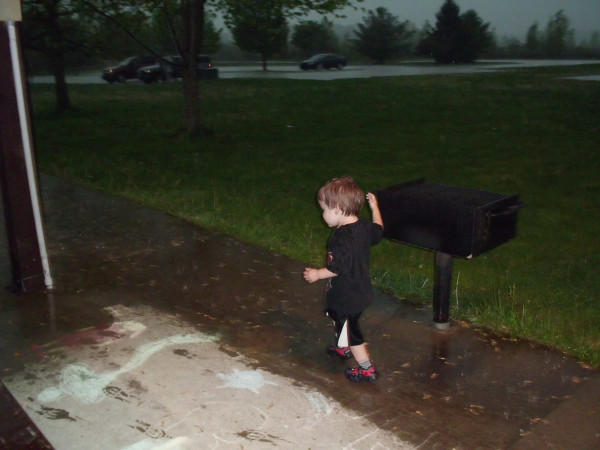 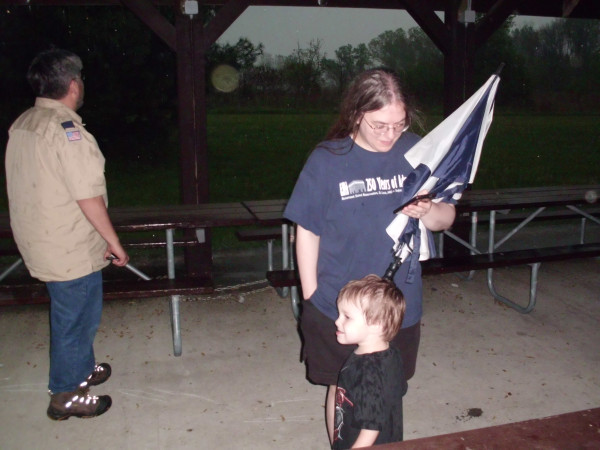 Hunkering down
The last holdouts, who only left when the tornado warning was announced

People were raving about the brisket I cooked for Homecoming. I've been asked for the recipe. The actual ingredients are simple and easy, but explaining how to deal with brisket takes some elucidation.

First, brisket can mean different things in different contexts. Anatomically, the whole brisket -- one of several primal cuts of meat from a beef carcass -- consists of two muscles which join at an odd angle. There's the flat -- which you'll see especially in corned beef brisket -- and there's the point. The whole, connected mass is called a packer brisket; meaning, you buy it in a big vacuum-sealed package from the butcher or meat-packer. A typical packer is around 15 pounds, give or take.

How much brisket does it take to feed a big group? With most meats, you figure about a quarter pound (pre-cooked) per serving. But that doesn't work with brisket: first, because there's so much fat, which tends to get cut away from what is actually consumed; and second, because nobody eats just a quarter pound, unless somebody is portioning everything out just so. Left out for people to pick over for seconds, people will easily eat a half pound of brisket per person. I cooked 71 pounds (four large briskets) for our Homecoming luncheon. There were maybe 65+ people there, I'd guess, and they ate three whole briskets, totaling about 53 pounds or so.

To prepare this mass of meat, you take it out of the vacuum-sealed plastic, rinse the blood off it, and pat it dry. The brisket has a large fat cap on one side, and often some hard fat underneath. I often trim some of this fat off as being too much of a good thing. Still, brisket gets its yumminess from the fat rendering off in the slow cooking process, so you'll want to leave most of it. It also derives its luscious mouth feel from the conversion of collagen (connective tissue) to gelatin in the moist braising environment. Assuming you have opened your packer and prepared the meat for action, we can go on to the recipe.

Take your rinsed and dried (and trimmed, if you like) brisket and slather with olive oil. Then liberally apply the following pre-mixed dry rub.

At this point, I usually take the spice-crusted brisket to a blazing hardwood fire and put it on the grill for a minute or so per side. This adds a little bit of char to the surface of the meat and a kiss of smoke, and that will pay great dividends by the time you reach the end of the whole process. If I don't have the ability to grill briefly over flame, I'll sometimes sear the beast in my 24" cast iron skillet, just to brown the surface a bit. I find that skipping this step means the spice rub can be more prominent than I like in the final flavor, instead of playing backup to the meat.

In any case, the whole brisket gets put in a hotel pan (disposable foil pan), with the fat cap side up. I add about a quarter to half a cup of water, just to start everything steaming. The moisture in the meat and the rendering of the fat cap will create a LOT of jus, so don't worry about anything drying out. Then I seal the top with aluminum foil and put in the oven at around 225 degrees for eight hours or so (basically, overnight). Let the meat rest for a half hour, at least, before slicing or pulling.

Leftover brisket makes incredible beef and noodles, by the way. And don't throw out the jus! Drain off the braising liquid and put in the fridge overnight. In the morning, remove the congrealed fat from the top and can the brisket broth left over. This makes incredible beef stock for soups, stews, pasta dishes . . .