Anna and I had made plans to take the boys to Cataract SRA today. We got started a little later than we had counted on, since my dental appointment took so long: three and a half hours. But still, we were on our way by 2:30. The boys fell asleep on the way.

As we pulled into Cataract and drove to the lower falls, Anna remarked that she had never been here before. I was surprised, but looking back, realized it was so. So I got to give my daughter a treat, as well as the grandcubs. We woke the boys up and got them out of the car. Daniel walked ahead with me toward the falls, but without much enthusiasm. As we got into full sight of the water, though, his attitude changed. He uttered one word, a boy's declaration of awesomeness: Whoa. And then he began to stumble forward faster, pulled by the immense attraction in front of him. James followed with Anna, more slowly.

Ann tried to explain some of the evident geology and other important stuff to the boys, but I'm not sure they could take it in. The stream was in full spate, and they were just trying to deal with the experience. 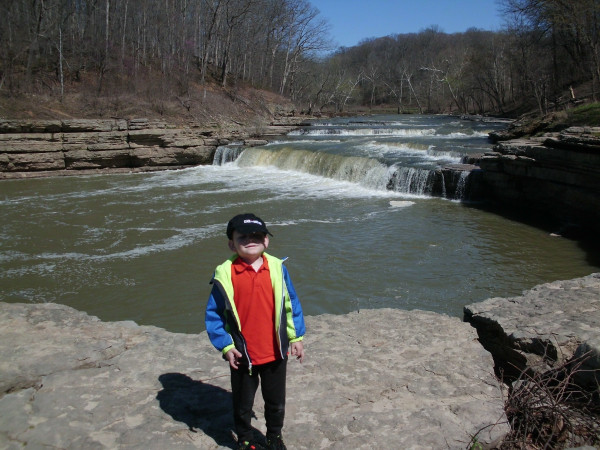 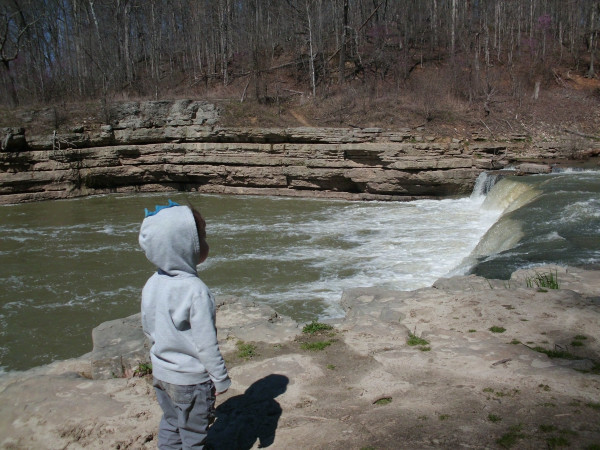 We drove back to the upper falls and got out to explore some more. We were admiring the falls from behind the guard rails when it became obvious that Daniel had to pee. I didn't immediately see a restroom, so I told him to step aside behind a rock or tree and do the necessary. When I looked around, he was setting himself up to pee off the cliff -- a notion I thoroughly understand, but for safety's sake didn't approve of -- so I showed him a low spot behind a large boulder, which sufficed for the purpose.

Down below the observation point, there still stands the foundation of the old mill; or at least, that of the mill race. The mill wheel would have hung in that channel. The presence of that old mill back in the day is why this stream is called Mill Creek.

We got a closer look at the falls, then crossed the covered bridge upstream. Daniel was fascinated with the construction of the bridge. Then we walked back up to the playground at the top of the hill. Another family with young boys joined us, and Daniel made instant friends (he's such a social beast).

The playset turned out to give each of the cubs a chance to grow a bit. James had gotten over his fear of simple slides and went down the straight slide several times. And then, to my surprise, he worked himself up to go down the twisty slide. Meanwhile, Daniel tried out the pole slide. 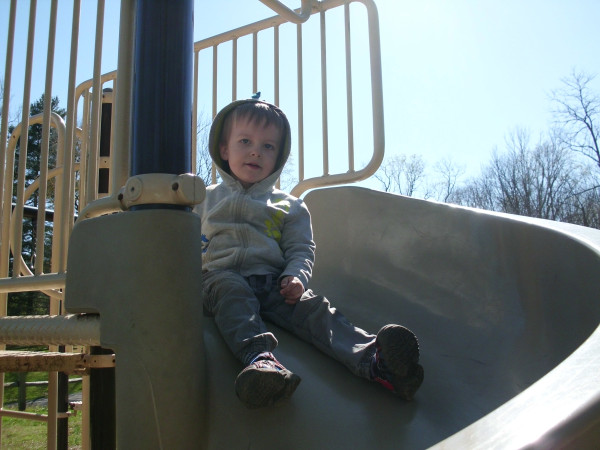 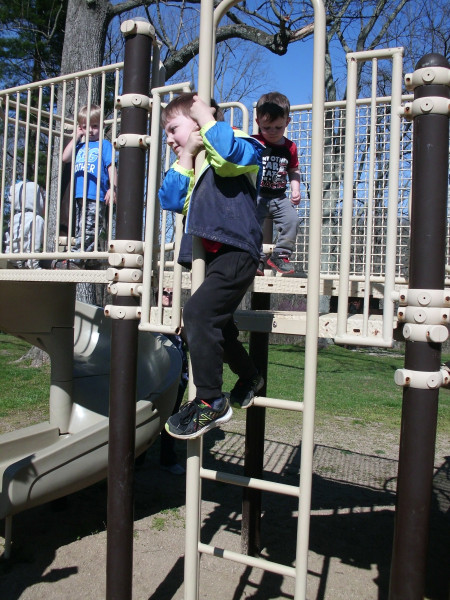 After a while, we left to investigate the Cataract General Store in the little town nearby. Bought some goodies and headed for home. It was a lovely day with fast water, sunshine, and all the redbuds aflame.
Collapse