At least, according to Robert Frost

I took a little trip over to Wilderstead to take a couple days off after Easter. I was completely knackered. Even with a good night's sleep Sunday night (following an excellent Easter afternoon nap, I might add), I was getting tired just driving over to the holler. I got there about 11:30 a.m. It was downright chilly in the cabin. So I fired up the space heater and took a good, solid hour and a half nap instead of lunch. Upon awaking, I ate some saltines and got out a good book. After a while, I fell asleep again. Read some more, slept some more. And again.

Finally, I felt rested enough to go take a look at the holler. I'd been needing to walk my fence line, especially up on Akes Hill. I knew I'd need to renew my signage, too, so I took along half a dozen "NO TRESPASSING" signs and a staple gun. Crossing over the Pishon, I paused to marvel at my little creek. The falls above the bathing pool have lost a little more stone. The falls keep backing up the creek as each spring flood washes away more of the stony bed. As ol' Heraclitus said, "You can't step into the same stream twice." Every time I look at this, one of my favorite spots, it changes. 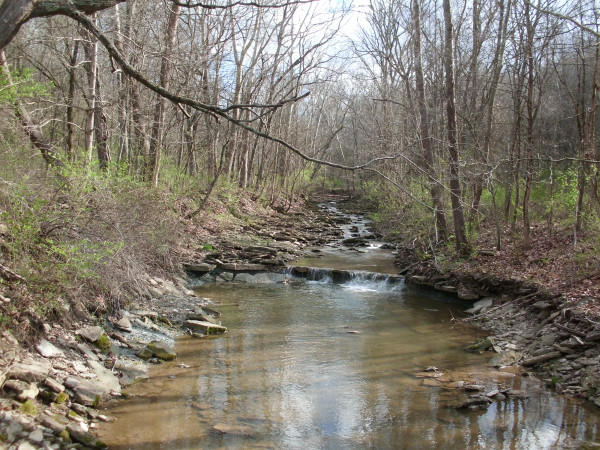 I crossed by the log bridge and started up the path to the top of Akes Hill. This starts on my neighbor's land and about halfway up crosses over onto mine. I get a little irked at his using his ATV to ascend the path, because he's wearing ruts that will lead to erosion, but I can't help but wish I had some sort of personal jet pack or something. Akes Hill is no joke to walk up. From the creek ford to my fence line just below the crest, the rise is about 180' over a forward distance of maybe 630'. Or a 2:7 grade. It's a schlep. 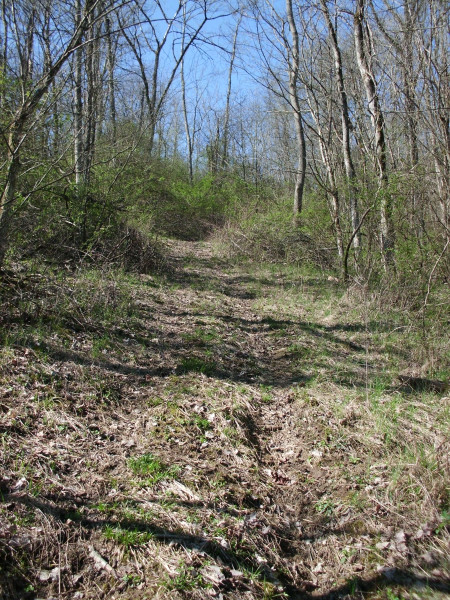 Schlepping up Akes Hill
Not for the faint of heart

It's been a couple of years, at least, since I walked my fence line up here. All of my signs were down, as it turns out. So I walked along replacing them as I went and looking for breaks in the fence. My neighbor, who hunts on my land with permission, had told me, "Ah, there's just one or two places that need fixing." Note to self: all good old boy hunters have more than a little of the poacher's eye. The fence had one break after another. Well, it was too late in the day to fix it. But I planned on coming back in the morning to do some serious patching.

Now, fences break for all kinds of reasons. Trees fall on them. Trees that were used as fence posts rot and fall over. Deer try to jump them and fail (deer aren't all that smart). And of course, trespassers -- including poachers -- twist and stretch, when they don't actually cut, your fence. Meanwhile, signs tear loose in the wind. Sometimes, people remove them, too. And here's the thing: if you don't keep your fences repaired and your signage renewed, it sends the wrong message. Nobody's watching. Nobody cares. Help yourself. Mending fence is like fixing broken windows in the city. It makes trespassers think twice about encroaching on your place. 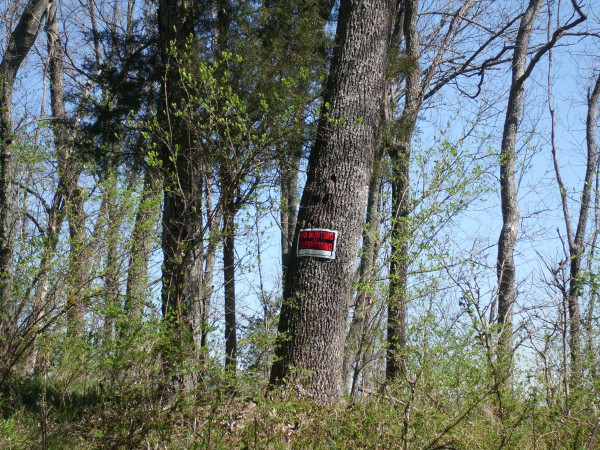 Behold, a sign!
These woods are being looked after

After supper, I scooted into town on an errand, and then returned to my cabin. I built a fire in the wood stove and settled in for a quiet night. I read until I was tired and then hit the sack.

When I woke up in the morning, it was doggone cold. I built the fire back up, since I was going to be there all day, and spent a lazy morning reading. By mid-morning, the sun was climbing over Woods Ridge and it was time to get to work. I figured it'd take me a couple of hours, and then I could goof off for a while in the afternoon.

This time I had to haul an iron t-post, a post driver, a small spool of barbed wire, a fence stretcher, and a pair of cutters up Akes Hill. I took it in small stages. The day warmed up quickly. I was regretting the jacket as soon as I reached the top of Akes Hill. Just more to carry. I suppose I was fortunate that I never had to carry all that stuff very far, 'cause there were too darn many breaks to mend!

In many cases, there was old wire still present, and I could just splice a new piece in. In only a few spots was I reduced to running all new wire. I worked my way steadily across the brow of the hill, up and down the gullies. By the time I reached the far corner of my land, my hands were cramped from cutting wire and hefting the stretcher, and my forearms were all scratched up from handling the wire. Gonna need a new pair of leather gloves, too, after this. Did somebody call for a stretcher?
Until we bought this property, I didn't even know what this was

I was regretting not carrying water with me on this job, but I figured, How long could it take? When I finally stumbled back down the hill and crossed the creek, I checked the clock in the cabin. I had been walking up and down and mending fence for almost four and a half hours. Sheesh. Still, the day was glorious, and all I had to do was the job at hand. No hassles, no phone calls, no writing sermons in my head. A deer ran right by me on the hilltop. This is what peace feels like. And I needed the exercise, anyway. Altogether, a very, very good day. A pair of good days, I should say.

Once I got back, I guzzled about a quart of water and caught my breath. Then, I started cleaning up the cabin as I always do. Left everything put away and locked up and headed for home, arriving here about 7:00 p.m.

By next week, this job will probably be impossible. I might not get to walk the fence line on Woods Ridge (opposite side of the holler) this year. The new shoots and the brambles grow very fast and they make it difficult to get right up next to the fence and work on it in many places. The best time to walk the fence is in late February and early March, after the winter slop passes but before things green up. With Easter so early this year, I've not been able to get out here and tend to business.

Anyway, thank you, Lord, for two very good days of rest and tramping the woods. I needed that.
Collapse