My daughter, Anna, (known here on LJ as

stryck) was born on the Tuesday before Easter in 1979. We brought her home from the hospital on Good Friday. By the time I got to the main service on Easter Sunday, I was utterly exhausted -- not only from dealing with her birth but with all the parish and community doings of the week. I rambled my way through some recycled stuff when it came time to preach. So the joke in our family is that Anna is responsible for the worst sermon I have ever preached.

Nowadays, Anna is living with us most of the time while her husband Brain (

anher) stays nearer his job. They have been at loose ends ever since moving back to Indiana from Kansas City a couple of years ago. Now that their finances are (hopefully) all in order, they can begin to look for a place of their own where they can all be together all the time again. Having Anna and the two grandcubs here, though, has helped remind me how proud I am of her.

Anna follows Christ and she wants to be part of the Church. She and Brian love and support each other, despite all their difficulties. Anna has not let migraines nor Seasonal Affective Disorder nor anything else stop her. She is a wonderful mother to Daniel and James. She is a published author, a talented cook, a fun person, a help to others. So, while I may have joked over the years that she is responsible for the worst sermon I have ever preached, I also need to say that she is, herself, one of the best sermons I have ever preached. 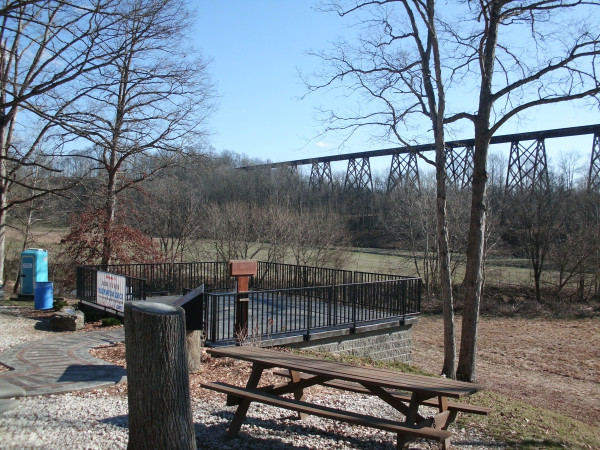 I had some time to kill this afternoon and so found myself toodling down through eastern Greene Co. I came to Solsberry and saw a sign pointing the way to the Tulip Trestle. I had heard of this beast, so I took myself off down the windy country roads to find it.

The Tulip Trestle was built in 1905-6. It is 157' feet high and 2,295' long. It is the longest railroad trestle in Indiana. An observation deck just off the road has been built for people to pause and get a look at it. I couldn't do it justice with any of my photos.

The information placard at the observation deck pointed out that back in the day before constant radio contact, someone had to come down out of the caboose and show a red lantern or flag off the back when stopped to prevent another train coming along and piling into the stopped train. One night a long train stopped in the vicinity, and a railroader stepped out into the dark night off the back end of the caboose, tossing his cigarette away as he began descending the caboose steps. His lit cigarette, however, didn't hit the ground until it had traveled 150' more than he bargained for. The back end of the train was stopped on the trestle, and he was about to take the longest (and last) step of his life when he pitched his cigarette away. The sign said it was possibly the only time that smoking actually saved someone's life.

I also noted the winding roads and hills and streams roundabout and thought, "Man, this would be a great place for a ten-mile hike!"

My newsletter column for February

The book that most deeply affected my life from its youth was undoubtedly J.R.R. Tolkien’s The Lord of the Rings. I was not quite fourteen when I began to read a copy borrowed from my elder sister. I devoured it and immediately began reading it again. And again. I read it so many times that now when I read it, I can hear it in my head at the same time my eyes are taking it up off the page.

This was of great help to me when I needed to brush up my German to pass a language proficiency test in graduate school: I obtained the German version of Der Herr der Ringe from the publisher in Stuttgart and plunged into reading it. Unfamiliar words didn’t detain me, because I could hear the English version in my head as I read the German sentences and could guess at the meaning. Unfortunately, having read The Lord of the Rings so many times in my youth, I now find this over-familiarity a handicap to enjoying the book today, and I re-read in it very rarely.

Anyway, one of the common criticisms of The Lord of the Rings by those who look down on it is that it is too easy on the characters. Everyone makes it home safely, they say. Nobody is scarred by the supposedly horrific things they have faced. But this is not true. The central character, Frodo, is certainly scarred by what he has experienced. He suffers not only physical pain but a kind of PTSD for several years after the victory of the West over the Dark Lord Sauron. In fact, the only way he can be truly healed is to leave Middle-earth entirely and pass into the West with the Elves.

At their parting, his servant Sam says, “I thought you were going to enjoy the Shire too, for years and years, after all you have done.” But Frodo replies, “So I thought too, once. But I have been too deeply hurt, Sam. I tried to save the Shire, and it has been saved, but not for me. It must often be so, Sam, when things are in danger: some one has to give them up, lose them, so that others may keep them.”

Not only does Frodo pay a great personal price to effect the overthrow of Sauron, so do the Elves. For a great deal of their magic has been rendered ineffectual by the destruction of Sauron’s Ring, and in order to avoid fading away, they must leave Middle-earth. So not only do the Elves lose Middle-earth, but Middle-earth (and all its remaining peoples) lose the Elves. And that is not a negligible cost on either side.

Evil can be resisted, but there is a price to pay. And while ultimate victory may be promised, there may be many defeats along the way. There are no guarantees for the here-and-now. That is a serious message, and it is near the center of The Lord of the Rings.

As Lent begins this month, it is something to bear in mind. The Church faces many challenges. Our society faces many dangers. And evil must be resisted, which means, ultimately, by you and me. (Who else is there?) This is part of our membership vows:

Do you renounce the spiritual forces of wickedness, reject the evil powers of this world, and repent of your sin? I do.

Do you accept the freedom and power God gives you to resist evil, injustice, and oppression in whatever forms they present themselves? I do.

Lent is a time to remind ourselves that we will pay a price for doing that. Evil will not go quietly, and we will be marked by our experiences in resisting it. Certainly, Jesus paid a price for his faithfulness: he was beaten and he was tortured to death on a cross. People mocked him as he hung there, dying. Yet the price he paid was not merely a cost to him personally. He paid for us all, that we might have the light of life.

Which means, in the end, that we will be able to look on the price we have paid to follow him and say, “It’s been worth it.”

S'okay, here's the preliminary itinerary for our happy Crew's trip to the Four Corners this summer. Still have a couple of cost items to nail down. Gas is cheaper than it was. Don't know how many are going. But my first SWAG tops out at about $400 per person for ten days of camping, hiking, touring fun.

Sunday, June 5. Leave after lunch and drive to St. Louis. Camp at Babler State Park on the far side of St. Looey.

Monday, June 6. Drive to Wilson State Park in the middle of Kansas. Camp by the lake. Maybe do a little swimming.

Friday, June 10. Drive down into the Navajo Reservation. Visit the Four Corners Monument. Drive through Shiprock and Farmington on to Taos. Good opportunity to buy Native American crafts, especially turquoise and silver jewelry. Camp at the trailhead for Wheeler Peak.

Saturday, June 11. Hike Wheeler Peak, tallest mountain in New Mexico, as far as weather permits. (There may still be snow on the peak.) Camp second night at trailhead or drive on down to Cimarron Canyon State Park.

Monday, June 13. Drive to Dodge City, see the sights of this old cattle town. Then drive to Crawford State Park, Kansas, near the Missouri border.