It was a glorious adventure -- again -- cooking for the Wapehani District Winter Rendezvous. Not that any of our happy Crew spent much time out looking for adventure. We were all frantically busy in the kitchen. Jeffrey, Myself, Anna, and Brian, plus grandcubs Daniel and James arrived at Maumee Scout Reservation about 3:00 Friday and immediately began setting up the kitchen and dining hall -- carting in supplies, cleaning, starting to cook. Kara, T.J., and Mason arrived about 4:00. Garret came later with his troop and joined us that evening. Pat and T.C. came for Saturday only. From our arrival up till almost noon on Sunday, we were cooking, serving, and cleaning for all but our few hours of sleep.

Daniel, the social butterfly, was ecstatic to have so many kids around. I was proud that the Scouts took him into their friendship and were very patient with him. He got tired of hanging around the dining hall and attached himself to a Cub Pack all unbeknownst to his parents. Anna found him in the OA basement wearing eye protection, learning to shoot BB guns. "I've been trained to shoot BB guns," he is saying now. Well, where better, you know?

Meanwhile, James had his third birthday on Friday. We made a gigantic brownie cake for him and the whole camp sang him the Russian Happy Birthday Song.

Then he blew the big '3' candle out most adorably and the evening Crackerbarrel was well and truly launched.

We broke all kinds of records for attendance this weekend. We were at maximum program capacity (500) by Friday night. A few unexpected units just dropped in on Saturday. Counting staff, we had at least 545 people in camp. Most of them came hungry and stayed for the Feast. Oddly enough, I came in more under-budget than I ever have before. Last year, I was almost $400 under budget, which is about usual for me; this year, I was about $800 under budget.

The full tally of what we whomped up is as follows. First, there was coffee and hot chocolate, which Rendezvous participants consume in vast quantities, and which have to be resupplied through the day and a half there are campers coming and going.

For the Friday evening Crackerbarrel (that's the evening snack regime, for you non-Scouters), we had summer sausage, Colby cheese, and saltines. Plus, we made James's Birthday Brownies (that's a chocolate almond brownie topped with a marshmallow coconut filling and then a chocolate ganache -- and bacon). With that, we also offered Ranger Ed's Mystery Meat. I've been telling Ed we've been planning this for a year. Little white cubes topped with barbecue sauce. When we were pressed, we told Scouts it was creamed 'possum. Picked up right off the road and dry aged! Actually, it was fried tofu topped with my Scotch barbecue sauce.

The staff have to be fed, too, since they don't have time to run the event and cook, too. For breakfast, we served up Toad in the Hole, instant oatmeal, and fruit cups. Staff lunch was Dublin Coddle, Irish Bread and Butter Pudding, and Soda Bread. All from scratch, naturally.

The Feast is what everyone looks forward to. They share memories of famous dishes from previous years. And they are always so kind to thank us for providing it for them. I typically plan five entrees, three sides, and two desserts. This year, the entrees were Pulled Pork with my Scotch Barbecue Sauce; Chicken-fried steak and cream gravy; Grilled Chicken Wings marinated overnight in a Dijon mustard and soy/ginger mixture; Venison Pot Pie with a biscuit crust; Jamaican Curried Goat and rice. This was the second year for the goat, and we got lots of good comments on it, on the order of, "Wow, that's hot . . . but it's so good."

Side dishes were green beans, roasted potatoes, and Italian salad. Desserts were home-made granola bears and a bottomless apple pie (as in, no bottom crust). I thought we'd have tons of pie left over; after all, we started with a hundred pounds of apple slices, making 16 hotel pans of pie. Nope. All gone in a twinkling. I only got to lick my fingers once to taste it.

The Saturday night Crackerbarrel is just leftovers. But what leftovers. And this morning, there were yet more leftovers to either throw out or send home with the kitchen staff. It took us four hours to clean the dining hall and kitchen completely before leaving camp just before noon.

I take great pride in doing what we do. Not many people can cook like that; fewer still can organize so large an event. I receive more compliments on this weekend than just about anything else I do in the year. But I am even more proud of the Venturers, youth and adult, who come out to cook with me. I certainly couldn't do it without their help, and I constantly brag on them not only for their hard and cheerful work, but for what fun they are to be with. Crew 119 is one of the best teams I've ever worked with on anything. Fourteen-year-old Mason was brand-new, on his first Crew outing and just learning his way around the kitchen, but he fell in with the spirit of the event and did just fine. 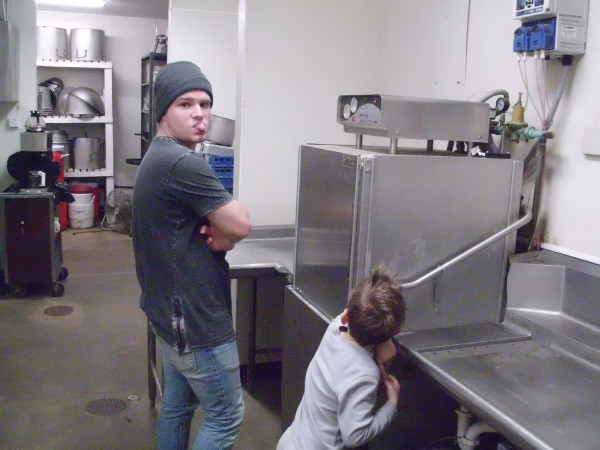 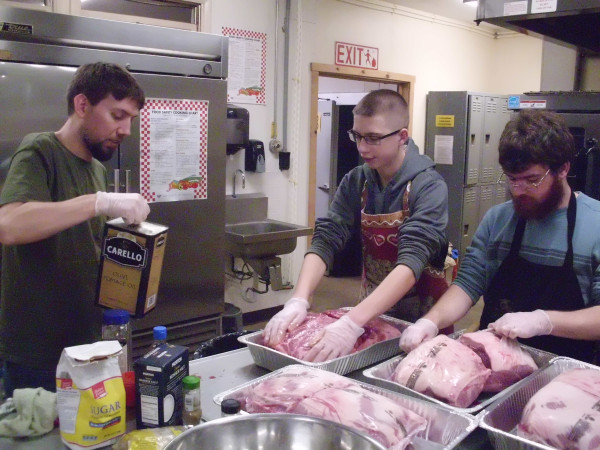 Butt Brigade
Applying a rub to a dozen pork butts 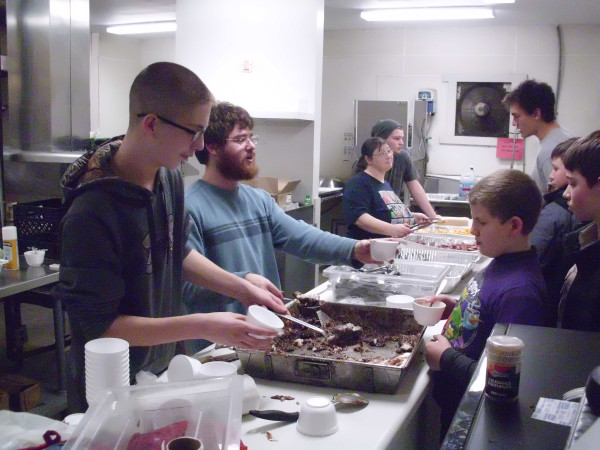 Grillin' and chillin'
Wings over Maumee 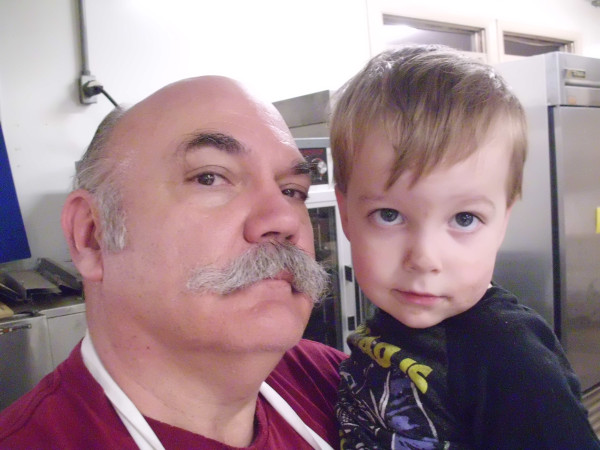 Bears in the woods
James and Grandbear take a twofie 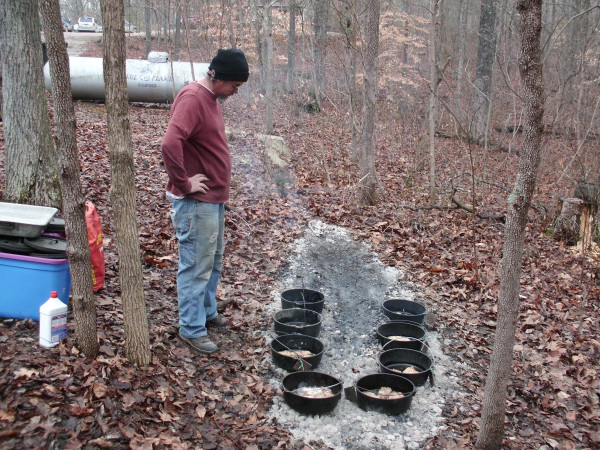 Cast Iron Alibi
Pat frying steak; we had to abandon this method as too slow Too much
The rest of us didn't have this option
Collapse