When push came to shove, only three Scouts showed up for Game Design Merit Badge today: T.C.; Jarrod; Andrew. They got a boatload of stuff thrown at them.

Today was mostly schoolish. In order to design your own game, you have to know an awful lot about what kinds of games there are, how they work (or don't), and what sorts of enjoyment people get out of them. We went through all that, at length. For illustrative purposes, Anna and Brian and I brought several games, some of which are very easy to learn and play. So we broke up the morning with things like Zombie Dice™, Pigmania™, and Love Letter™.

I showed them my unfinished design books on the Role-Playing Game I worked on for years, just to show them how crazy this process can get. And I brought over some hand-painted miniatures from the house and explained how they were used in gaming.

Of all the sorts of games there are, the class was least familiar with Role-Playing Games (only TC had ever played one) and Miniatures Games (all were blank on the concept). And while all of them knew about Tiles Games, none had ever played one. They understood and had a lot of experience with Physical Games and Sports, Card Games, Dice Games, Electronic Games, Party Games, and Board Games.

After lunch, we zeroed in on just what these guys are going to have to do to design their own game. It's a big project to take on. Next time we get together, we are inviting all their buds to come join in, because we have to do a lot of play-testing of games in general -- and their games in particular.

We made better progress today than I thought we would, because we were so few in number. I had allowed for nine Scouts to do all this very intensive stuff. That doesn't make the job each of these boys has in front of him any easier, but it means we can go as fast as they can go, instead of worrying quite so much about managing a large herd of guys trying to get play-testing time. We finished with 45 minutes to go, so Anna and Brian taught Jarrod and Andrew the game Legendary™. 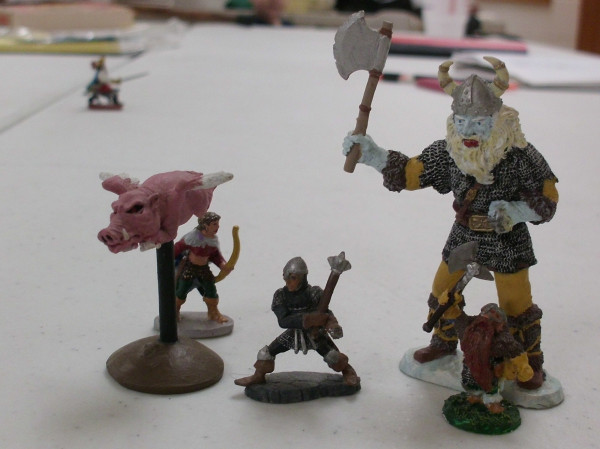 Miniature madness
Everything from Frost Giant to Flying Pig 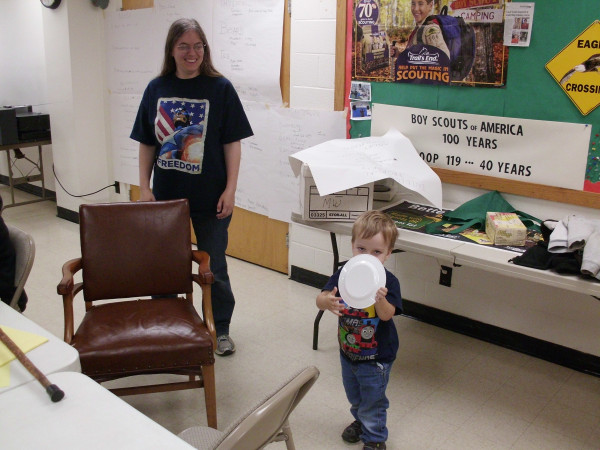 Kibbitzer
Every gaming session has at least one such distraction

It was a good day today. Game Design Merit Badge class wore me out, but we had fun. Most of all, I appreciated spending that time with Anna and Brian as my co-counselors. After the MB class was over, I came home and took a good nap. Deanne made a great supper. And then, while Anna and Brian baked muffins and Daniel and James kibbitzed back and forth between the kitchen and Deanne on her computer, while Zach did his stuff online, I took a shower and dressed my ankles and feet.

I've had to change my personal care schedule around. Late afternoon or early evening is the best time for me to concentrate on changing dressings. It's a complicated process, but I'm getting the hang of it. The wounds are looking better, I think, though no doubt there's a long way to go yet. The big thing is to be able to normatize as much as I can, so I can go places and get things done and not be laid up all the time.

Stressful as things are on weekends, I enjoy having my whole family here. Zach comes for the weekend to clean, and plays patiently with the cubs. Brian is fun to have here, too. Anna has come a long way towards de-stressing; she's even beginning to write stories again. All of us are helping each other through all the stuff each one has to deal with. It's what family is supposed to be for.

I am greatly blessed.
Collapse