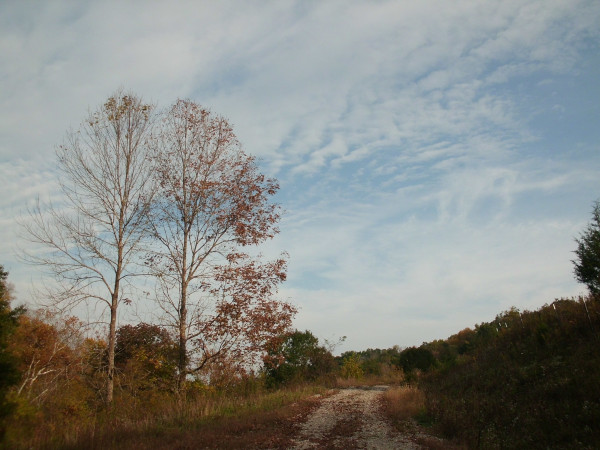 From yesterday at Wilderstead, this picture of a perfect Fall morning.

I'm preaching on Matthew 13:24-30 tomorrow, a sermon titled, "Weeds and Seeds." Here is that text in Old English

Here is the same text in Wycliffe's translation into Middle English.

Anothir parable Jhesus puttide forth to hem, and seide, The kyngdom of heuenes is maad lijk to a man, that sewe good seed in his feld. And whanne men slepten, his enemy cam, and sewe aboue taris in the myddil of whete, and wente awei. But whanne the erbe was growed, and made fruyt, thanne the taris apperiden. And the seruauntis of the hosebonde man camen, and seiden to hym, Lord, whether hast thou not sowun good seed in thi feeld? where of thanne hath it taris? And he seide to hem, An enemy hath do this thing. And the seruauntis seiden to him, `Wolt thou that we goon, and gaderen hem? And he seide, Nay, lest perauenture ye in gaderynge taris drawen vp with hem the whete bi the roote. Suffre ye hem bothe to wexe in to repyng tyme; and in the tyme of ripe corne Y shal seie to the reperis, First gadere ye to gidere the taris, and bynde hem to gidere in knytchis to be brent, but gadere ye whete in to my berne.

This became the following familiar text in the KJV.

Another parable put he forth unto them, saying, The kingdom of heaven is likened unto a man which sowed good seed in his field: But while men slept, his enemy came and sowed tares among the wheat, and went his way. But when the blade was sprung up, and brought forth fruit, then appeared the tares also. So the servants of the householder came and said unto him, Sir, didst not thou sow good seed in thy field? from whence then hath it tares? He said unto them, An enemy hath done this. The servants said unto him, Wilt thou then that we go and gather them up? But he said, Nay; lest while ye gather up the tares, ye root up also the wheat with them. Let both grow together until the harvest: and in the time of harvest I will say to the reapers, Gather ye together first the tares, and bind them in bundles to burn them: but gather the wheat into my barn.

Of course, the text is the same, since all derives from the Greek (via Latin in the case of the Old and Middle English), but I find it fascinating to watch how the English translation is shaped. The thing these days it to come up with new and startling translations of the Bible, as if no one had ever expressed these things in English before. And so many of these modern translations are clunky (nor do they show forth the subtlety of the Greek text very well.) But for those who have an ear for good English, the emergence of the sense of the text in English comes very early in translation history, and shapes itself into a better and better example of English qua English as version succeeds (and builds on) previous versions. Which may explain why I think the (old) RSV (c. 1971 -- NOT the NRSV) is about the best English translation of the Bible, both for sense and for quality of English, that I have ever read.
Collapse