I have sent the following appeal today to eleven other Scouting ministry stalwarts in my area.

Last week, out at Maumee Scout Reservation, I noticed that the chapel was looking particularly ratty. The biggest problem is that the cedar siding on the canopy is rotting away. I spoke to both Ranger Ed and Council Exec Glen about it. I’m not the only one who’s noticed. There are some Scouters who have said they would like to fell some native white oak and mill it into boards to re-side the chapel. That would be basically free, since camp has lots of white oak. Which would be great, but . . . there is a drastic shortage of round tuits in the Council; nobody can seem to find one to get this job done. And even if the lumber could be cut and milled this fall, it would still be next year before it could be installed. And the chapel looks ratty now.

It occurred to me that we probably have enough people connected to EFUMC’s Scouting Ministry to come up with the cash to buy replacement boards for the chapel, and I’m sure we have enough youth and adults willing to go spend a couple days this fall re-siding the structure. I went down to Menard’s and priced 1” x 10” x 16’ cedar boards. It would take about twelve hundred dollars to do the job. Surely to goodness we could find twelve Scouters in our area who would give a hundred bucks apiece to meet this need. If not, well, some might give more, some less. And I think there might be other sources for small donations in the church and our Scouting units.

So, I’m asking: Would you be willing to pledge a donation to Crew 119 or EFUMC to re-side the camp chapel this fall? If I could get a quick response somewhere around $1200, I think I can get this ball rolling. Let me know what you would be willing to do.

If you also would like to help with this project, please let me know by FB message. If I can get a sufficient response, I'll pursue this further. Ideally, I'd like to see our youth out in the woods this fall, making God's tabernacle in the wilderness as attractive as it deserves to be. 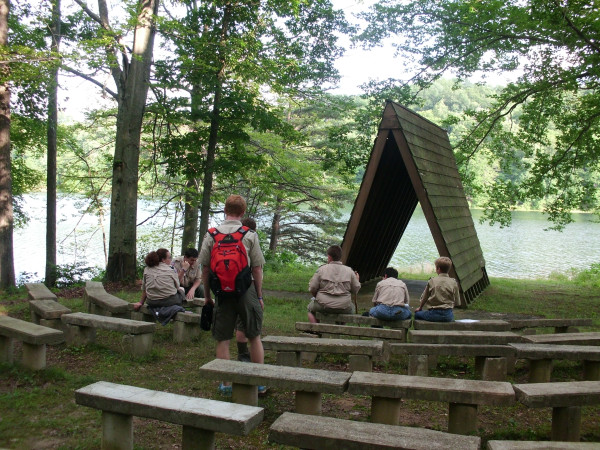