A lot of ink -- well, ether -- is currently being spilled in complaints and rants about the success of so many conservative/evangelical/orthodox candidates in my Annual Conference's election of delegates to General and Jurisdictional Conferences last week. I'd just like to say that I appreciate the effort that so many poured into encouraging people to offer themselves and in ascertaining their views on the issues. I appreciate those who did so to identify candidates for whom I did not vote as much as those who identified candidates I whole-heartedly supported. 'Sall good.

Now, in some previous quadrennia, I have come to Annual Conference with my own, highly personal, list of those I wanted to support. And I could have easily come up with my own list of 19 persons (8 General Conference delegates, 8 Jurisdictional Conference delegates, 3 alternates) to vote for, based on whom I knew well enough to have an opinion of, one way or another. Given that my choices were unlikely to prevail on down the line, I wouldn't even need 19 names. A dozen would have given me a plenitude of parsons to plump for.

But as it is, I learned of many other fine people who shared the same concerns I had, some of whom I didn't know well at all. I am enriched by knowing them. I was happy to vote for many of them. I didn't forego voting for anybody I wanted to vote for; rather, the information I got from talking with other, like-minded people, simply gave me greater confidence in the choices I was making.

What would have happened if I had never bothered to talk with other, like-minded folk (or they with me) to come up with lists of names, formal or informal, with whom we were simpatico, would be like this. We would spend a couple of ballots seeing who was likely to win election, and then the process would coalesce around electing those who were shown to be in the top tier of early vote-getters. Name recognition and public reputation would determine a lot of the results. This is how we used to do it. This is still pretty much how it works, which is why the most important step in anybody's quest for election is to find fifty of one's closest friends (or more) to get one's name as high on the first ballot results as possible. That nucleus of support, combined with whatever name recognition and public rep one has, leads to one's place in the electoral pecking order.

Now, without the benefit of others' counsel -- in the form of conversations, social media discussions, meetings, and yes, even lists -- I would have voted for many of the people I wound up voting for, but in order to not vote for those I didn't want to vote for, I would have spent a fair portion of my votes on various ballots paying compliments to people who had no chance of being elected. Which is fine, but it takes more time and it places more power in the hands of the low-information voters who just want to get the process over with. If it matters what these people do after they're elected, if this is more than just a popularity contest, then I want my votes to count for more than that.

The more information we have upon which to base our choices, so long as it is not negative (as in, "don't vote for that person" or "those people"), the better. The more open the endorsements are, the better. The more honest candidates are about what they'll do and how they'll vote, the better. And, correspondingly, the more the Conference poo-bahs try to manage the process so as to keep information low and innocuous, the more dissatisfied we are likely to be with the results -- whatever our position on the issues.

In the end, our Conference elected a group of highly qualified, talented, conscientious people. More of them were on my side of the issues than not, for which I am profoundly glad; but then, we're a pretty conservative Conference. Especially now that many Local Pastors are allowed to vote for delegates, the influence of the liberal/progressive clergy who are so prominent among the Elders and Deacons, and who often occupy positions of great trust within the institution, is less than it was. They are very unhappy about it, but that's the way it goes. In a truly open campaign where the views and commitments of all the candidates were really known, the idea that they would do better than they did seems highly dubious to me.

As for how to do it better and more fairly, I offer you two options: either get out of the way and let people do a wide-open campaign with public endorsements and distribution of literature and all the rest of it -- or let God decide by putting all the eligible names in a jug and having a blindfolded child draw out those chosen to serve.

Lightning has a new favorite place, on an old blanket in a box behind Deanne's chair. Earlier this afternoon, Hera had taken it over. Growling ensued on both sides. Deanne banished Hera from the study. Lightning settled in for a good long nap at Deanne's feet. 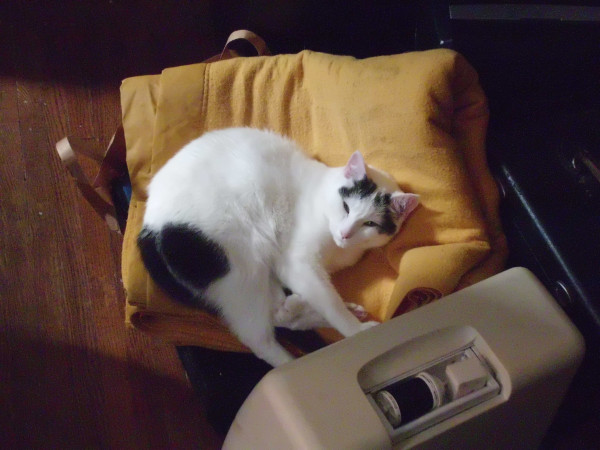 I'm in my happy place
Go away
Collapse