Yesterday afternoon, I went over to Columbus to visit with my Aunt Clarice -- known to her friends as "Vickie" (because her name is Clarice Victoria). She is the last of my mother's siblings. She was the youngest of the seven children of the family. She is now 84.

I took her picture, but it doesn't really look like her. Aunt Clarice is always smiling, always talking, always looking at you sidelong to see if you're getting the joke. Despite her physical frailty, when she talks she seems just like she always did, forever young. But when she holds still for a picture, the years pile on her.

I need to stalk her like I would a deer nibbling the flowers in the front yard. I'm sure if I brought her flowers, I could get her to taste them. Aunt Clarice would try anything. Then, if I just had my camera handy . . . 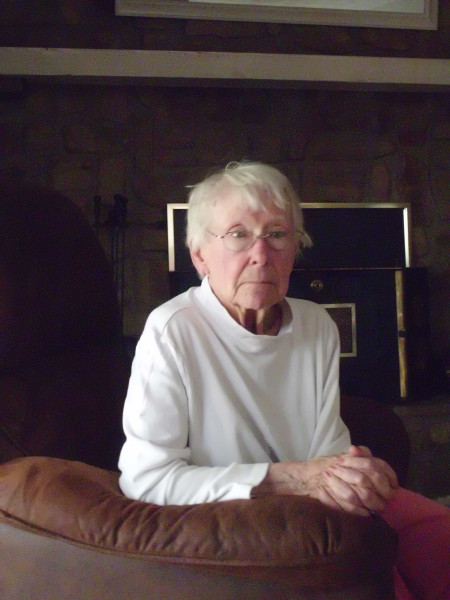 Her older siblings went to Smithville High School, but Aunt Clarice (for what reason I don't know) went to Bloomington High School back when BHS was at Seminary Square, where College Ave. meets 2nd St.

Aunt Clarice lives with her younger son, Ted. Her older son, Robert, who is my age, lives in California. In between Robert and Ted was Barbara, who died a few years ago. She was a career Marine. Her loss was very disorienting to Aunt Clarice, who is just now coming to terms with it.

Aunt Clarice also satisfied my curiosity about her brother Benny. Benny was a young child when he died, and my mother would occasionally make reference to him, but I didn't know anything about him. I've seen his grave next to my grandparents' graves at the K of P Cemetery outside Smithville. Aunt Clarice was 2 1/2 when he died; he was the next oldest, just big enough to run with the older kids. The various siblings (other than the toddler, Clarice) were all playing in the creek on a winter's day, with no thought of the cold. It was what country folk did back then. Benny caught pneumonia and died. I'm glad to know this, and there's nobody left who could have told me but Aunt Clarice.

I'm not as good at keeping up with family as my two sisters. I need to do better, especially with Aunt Clarice. She is very precious to me.
Collapse