My Sunday School class (Middle Schoolers and High Schoolers) continue to make progress on their big stained glass project. Last year's Confirmation Class (Mason, Logan, and Harrison) designed a large piece. Last fall, I began teaching them the skills. By Christmas, we were ready to start work on the actual design.

There will be a large (33" x 45") window, a sea scene with an "ark" on it beneath a hemispherical window featuring a dove. There will be narrow panels on each side of the central ark window, one featuring animals, the other people. The legend on the gold band of the central window will read, The Church is the Ark of Salvation. The animals point back to Noah and God's care for creation; the people on the other side point to the life of the Church.

I've been neglectful of taking pictures of kids cutting and grinding glass. So these set shots aren't as interesting as they might be. That said, here are a couple of pictures of what we've been up to this year. 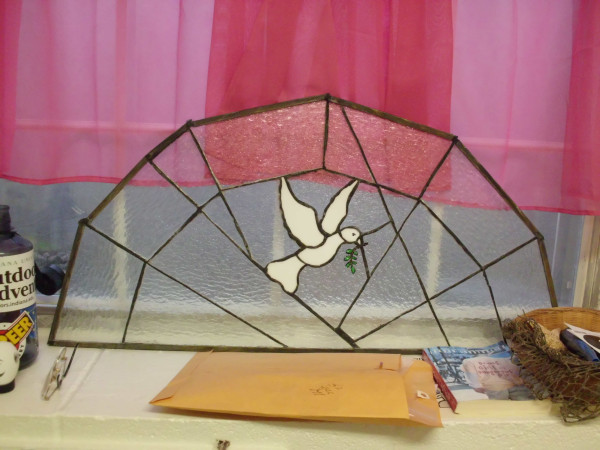 Dove
This is the first window to be finished. We learned a lot about soldering on this one. Ark
This is what we're working on now. We hope to have this done by the end of summer.

Keep in mind, this is actually being done by youth, with only a little adult help. I believe in the contributions that kids can make!

Once all five windows are done, we'll build the light box to display them. Then, adults will have to anchor the finished project to the sanctuary wall and hook up all the electrical stuff. And we'll have a dedication in worship. When? Oy. Sometime after the first of next year?
Collapse